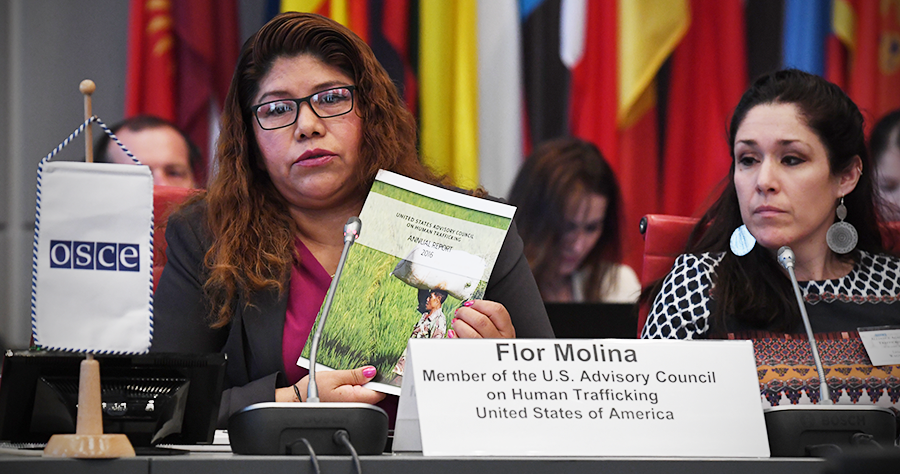 Flor Molina, a human trafficking survivor and member of the U.S. Advisory Council on Human Trafficking, holds up a copy of the Council's 2016 Annual Report during her presentation at the 18th Alliance Against Trafficking in Persons Conference. (USOSCE/Colin Peters)

Everyone Has a Role: How to Make a Difference Together

Evaluating, strengthening, and building new partnerships in the fight against human trafficking was the focus of this year’s OSCE Alliance Against Trafficking in Persons Conference, held April 23 and 24 in Vienna, Austria.

At the conference, governmental and non-governmental experts from across the OSCE region explored how cooperation among and between different sections of society, as well as between governments and the private sector, can further the fight against human trafficking.

Conference participants paid particular attention to the importance of working with those most likely to come into contact with trafficking victims, such as medical practitioners, teachers, and those in the transportation and hospitality industries.

Speaking at a side event on leveraging partnerships with the transportation industry, held on the margins of the conference, Nicole L. Bambas of the Office of International Transportation and Trade at the United States Department of Transportation (DoT) gave an overview of DoT work with airlines and other transportation sectors to conduct training to help identify and respond to situations of trafficking in persons, and described some DoT initiatives that engage both the private and public sectors.

One of these, the ‘Blue Lightning Initiative’, has already trained over 116,000 flights attendants in how to spot and react to human trafficking. Another initiative, a stakeholder group the DoT established called the ‘Transportation Leaders Against Human Trafficking’, has engaged with over 200 organizations from across the transportation industry on training and education, policy development, public awareness, information sharing and, importantly, encouraging industry leadership to speak out about the importance of human trafficking.

Speakers at the conference also included survivors, in recognition of the important role they can play in sharing their first-hand experience to strengthen the effectiveness of anti-trafficking policies.‎

Member of the U.S. Advisory Council on Human Trafficking‎ ‎Flor Molina explained how the Council, established in 2015 and representing the diverse population of human trafficking survivors across the United States, reviews government policy and makes recommendations, serves as a point of contact for federal agencies reaching out to survivors for input on programming and policy, and publishes an annual report that contains their findings.

A unique mechanism in the OSCE area, the Council is composed of 11 former victims of human trafficking who bring their knowledge and experience to bear in advising and making recommendations to the U.S. President’s Interagency Task Force to Monitor and Combat Trafficking in Persons.

Fighting the scourge of human trafficking is a foreign policy objective of the United States.

At the 2017 OSCE Ministerial Council in Vienna, Austria, OSCE States adopted two new decisions aimed at strengthening the Organization’s ability to combat trafficking in persons, including one on protecting children from traveling sex offenders, from easy access to online pornography, from misuse of the Internet, and from other forms of sexual exploitation. This decision was introduced by the United States and based on resolutions by U.S. Helsinki Commission Co-Chair Representative Christopher Smith at the OSCE Parliamentary Assembly in 2016 and 2017.