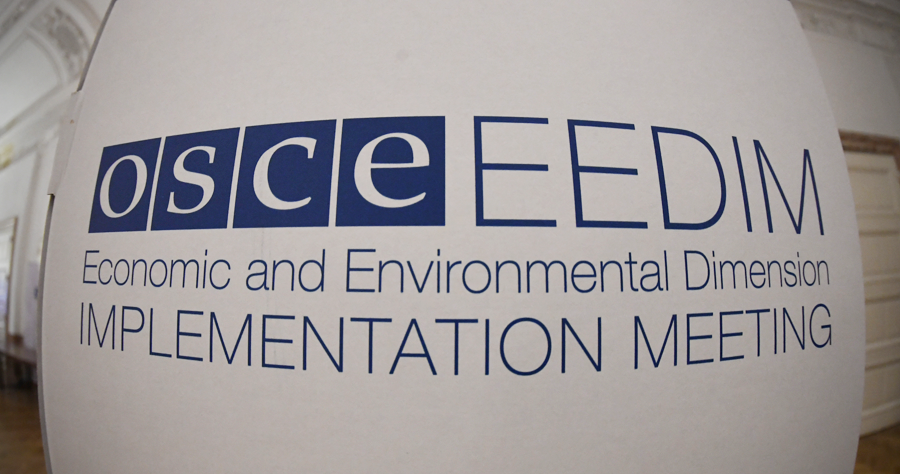 We look forward to building off previous meetings and the Economic and Environmental Forum in Prague in September, hearing how commitments made in these forums are being implemented on the ground, and concentrating on ideas that can be considered for Ministerial Council Decisions in December. We welcome constructive dialogue with government, academia, civil society, international organizations, and the private sector on how the OSCE can best address challenges in economic and environmental issues, and what role participating States can play, to make the OSCE region more secure and prosperous.

This week, we focus on the environmental realm. These topics have serious consequences well beyond. The Helsinki Final Act asserted, and the Maastricht strategy concurred, that “efforts to develop cooperation in the fields of trade, industry, science and technology, the environment, and other areas of economic activity contribute to the reinforcement of peace and security in Europe, and in the world as a whole.” Disaster preparedness, for instance, not only saves lives but enhances regional security, stability, and economic growth, as described in the 2007 Madrid Declaration on Environment and Security. We have seen this firsthand in recent weeks in the United States with unusually powerful hurricanes and forest fires.

Globally, fresh water is an increasingly scarce resource and potential source of conflict. As an organization focused on security, the OSCE should examine how it can prepare for, mitigate, and respond to water shortages, floods, and pollution. Drawing on experiences in integrated management in the Sava river basin and the Chu and Talas Rivers, as well as from the demand-driven Environment and Security Initiatives – or “ENVSEC” – the OSCE called participating States to action with its 2007 Ministerial Decision in Madrid on Water Management.  It is time to take stock of progress.

OSCE countries’ growth in populations and economies will raise energy security and environmental stewardship challenges in the region and beyond. Participating States should focus on efficiencies across the energy value chain, diversification of energy sources, path of delivery, and fuel type. We also encourage minimizing third-party and environmental externalities to ensure that our investments in the future yield the best possible returns — politically, economically, and socially.

The United States has been, and will continue to be, a leader in energy sector innovation and environmental protection. Renewable energy generation in particular has seen tremendous growth. In 2016, renewable energy accounted for 22 percent of the U.S. power fleet, with 244 GW of installed capacity. The United States also has a strong record of reducing greenhouse gas emissions. Since 2015, CO2 emissions have fallen by 11.5 percent and are expected to continue to decline. Economic growth and environmental stewardship are compatible.

The United States has an attractive investment and regulatory environment, which has helped unleash market forces for an energy revolution. The business sector is driving change. Businesses are investing in clean energy technology and decarbonizing their supply chains at a record pace. Renewable energy has expanded rapidly and generates hundreds of billions of dollars in economic activity. Twenty-two of the Fortune 100 companies – industry leaders in retail, technology, manufacturing, finance, and insurance – have committed to eventually procuring all of their energy from renewable sources. There is tremendous economic opportunity for OSCE participating States and their private sectors which develop, manufacture, and export clean energy technologies.

As we make progress on energy security and environmental stewardship, we must also ensure our critical energy infrastructure is adequately protected, as was agreed in the two Ministerial Council Decisions from Kyiv in 2013. Disruptions in electricity delivery caused by natural disasters, technical malfunctions, or cyber-attacks can create economic havoc. Proper planning and infrastructure investment are necessary to ensure minimal disruption.

For success in these areas, any initiative must include political will of governments, along with the support of civil society and the private sector. Good governance and anti-corruption efforts must be diligently enforced to ensure goodwill is effective and not stymied by bad actors. Because many of these efforts will entail lifestyle changes, and not just policy shifts, they should be accompanied by public information campaigns. The OSCE has already been helpful in this area through the outreach efforts of Aarhus Centers.

The United States looks forward to fruitful discussions on these issues over the next couple of days, learning from best practices around the region, and making progress toward consensus on environmental issues and the promotion of security. Once again, the United States thanks Ambassador Koja, the Austrian OSCE Chairmanship, and Ambassador Žugić. Thank you, as well, Secretary-General Linhart and our other speakers for their contributions this morning.