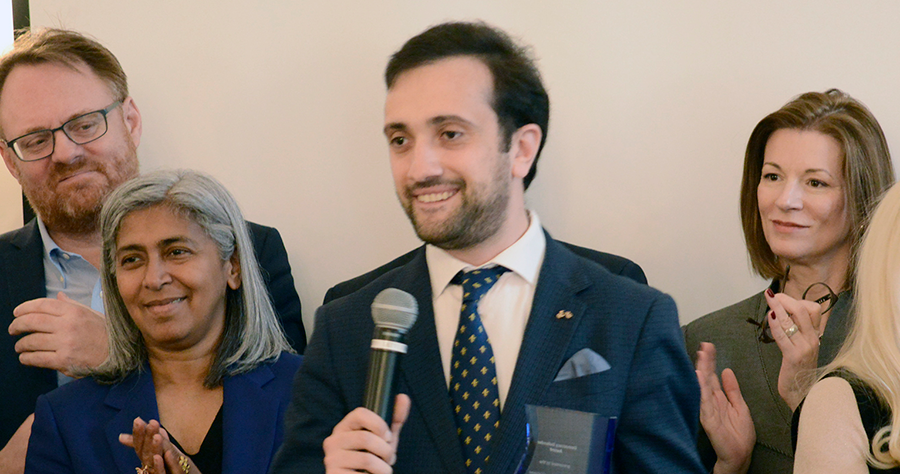 Union of Informed Citizens Director Daniel Ioannisyan accepts the award on behalf of his organization at a ceremony on March 11, 2019. (Photo: DDA)

The U.S Mission to the OSCE joined 35 other OSCE delegations today in presenting the 2019 Democracy Defender Award to the Union of Informed Citizens(UIC), an Armenian civil society organization, for its outstanding contribution to promoting independent journalism and informed decision-making, as well as to strengthening election monitoring in Armenia. UIC’s Daniel Ioannisyan accepted the award on behalf of the organization at a ceremony today at Schwedenhaus in Vienna, Austria.

USOSCE Chargé d’Affaires Harry Kamian said: “The United States is proud to be one of the original co-founders of the Democracy Defender Initiative. We are pleased to join the 35 other OSCE delegations in awarding the 2019 Democracy Defender Award to the Union of Informed Citizens.”

The Democracy Defender Award honors a person or group for exceptional contributions to the promotion of democracy and the defense of human rights in the spirit of the Helsinki Final Act and other OSCE principles and commitments. The Award was established in 2016 to recognize the enormous contribution civil society makes to defending and promoting democracy in our region.  In a joint statement to the OSCE Permanent Council on February 28, eight participating States – Canada, Denmark, Montenegro, the Netherlands, Sweden, Switzerland, the United States and the United Kingdom – noted that “While the space for civil society in parts of the OSCE region continues to shrink and attacks on human rights defenders continue to rise, it is incumbent upon us as OSCE governments to reverse this troubling trend, and to ensure that civil society is able to thrive.”

Mr. Daniel Ioannisyan founded the “Union of Informed Citizens” NGO in 2013. He was appointed as a civil society representative on the Electoral Legislation Reform Commission in 2018.

Supporting civil society and human rights defenders remains a priority for the United States.  The U.S. Mission was proud to stand with so many partners from across the OSCE to recognize those working to protect and defend democratic principles, human rights, and fundamental freedoms.