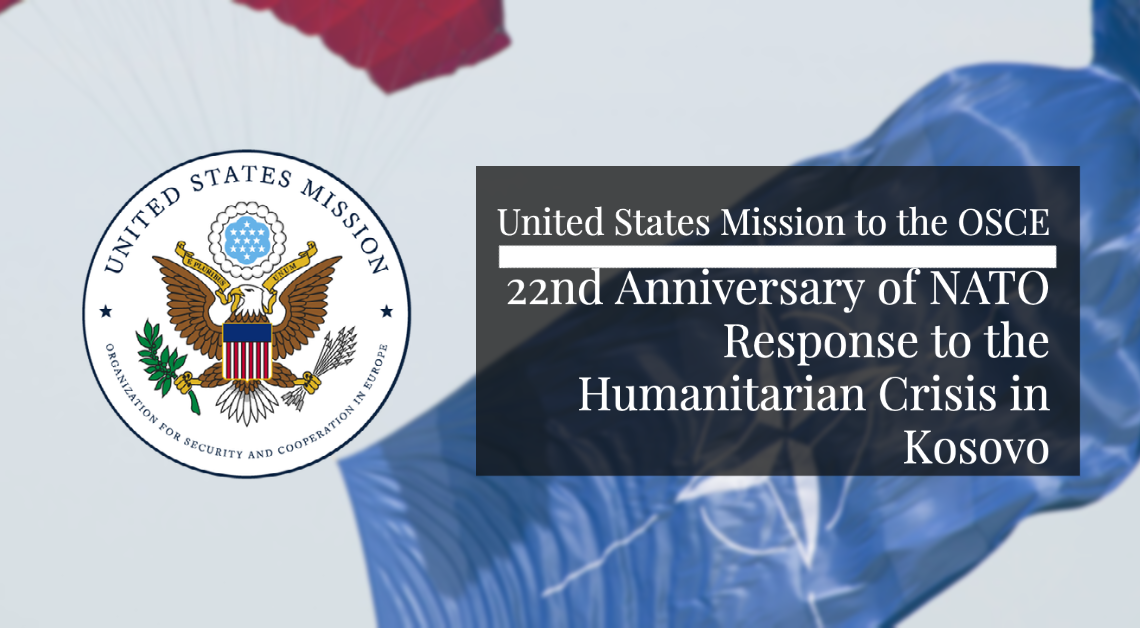 22nd Anniversary of NATO Response to the Humanitarian Crisis in Kosovo

22nd Anniversary of NATO Response to the Humanitarian Crisis in Kosovo

Twenty-two years ago, NATO launched Operation Allied Force to end a decade of bloodshed in the Balkans.  Throughout the campaign, every effort was made to compel the Milošević regime—through peaceful means—to stop its brutal and horrifying campaign of ethnic cleansing.

NATO’s use of force was both necessary and legitimate.  The UN Security Council had expressed its concerns about the threat that the grave humanitarian situation in Kosovo and the mounting number of refugees posed to international peace and security.  Today, as we mark Operation Allied Force, we remember the hundreds of thousands of innocent people driven from their homes and the thousands who were killed or went missing due to the violent nationalism of the Milosevic regime and its forces.

On the 22nd anniversary of the NATO intervention, it is incumbent on the governments of both Serbia and Kosovo to ensure that victims and their families have full access to justice and information about the fate of their loved ones.

We regret the loss of innocent civilian lives, including those who perished during this military operation.  We remember and mourn with those families on all sides who lost loved ones throughout the conflicts of the 1990s.

Today, the OSCE and its participating States, including the United States, continue to facilitate the safe, dignified, and voluntary return of the remaining displaced persons to Kosovo.  We support a multi-ethnic and independent Kosovo at peace with its neighbors, pursuing a European path together with Serbia.  At the same time, Serbia is a good friend of the United States and a NATO partner.  Serbia joined NATO’s Partnership for Peace program in 2006.  NATO trains Serbian soldiers to contribute to international peacekeeping missions, has been working with Serbia on security force and institution reform, and has invested millions of euros to help Serbia destroy more than 200 tons of ammunition.

The United States strongly supports a democratic, prosperous, and peaceful future for the western Balkans and recognizes Serbia’s important role in this.  We encourage Serbia and Kosovo to take steps to normalize relations and fully support the EU-facilitated Dialogue between Serbia and Kosovo aimed at a comprehensive normalization agreement—which should be centered on mutual recognition.  This will require compromise by both sides.  The status quo is unsustainable, and it prevents both Serbia and Kosovo from reaching their full potential.

Let us honor the memory of those who were lost by working together to build a future of peace and prosperity for the children of the western Balkans.  The best way to do that is for the leaders of Serbia and Kosovo to return to the EU-facilitated Dialogue.