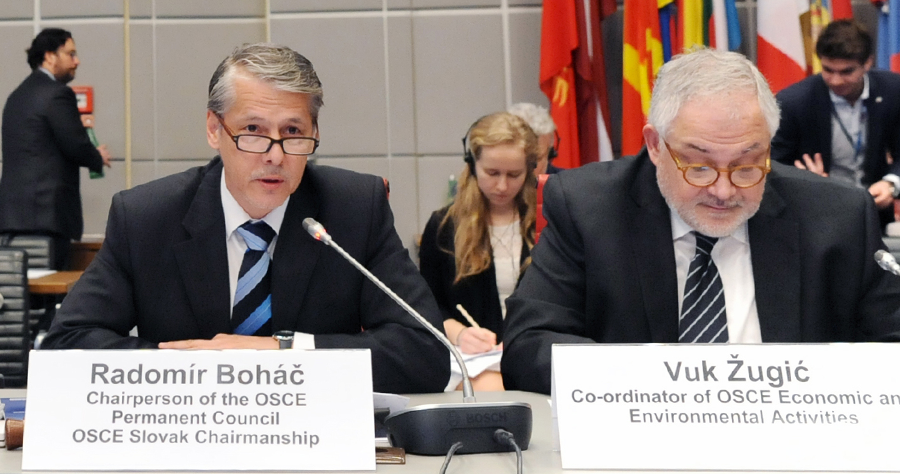 A warm thank you to the Slovak OSCE Chairmanship and Ambassador Žugić, once again, for organizing this week’s Economic and Environmental Forum (EEF) preparatory meeting. We believe these conversations form a good starting point for the months ahead, leading eventually to one or more Ministerial Council decisions in Bratislava in December, as well as to other effective engagement by the OSCE.

Yesterday, we heard from expert panelists from the energy industry about challenges and models to ensure energy security, including by tapping into the benefits of digitalization. Head of Regulatory Affairs for the Energy Distributor for Western Slovakia Tomás Šipos described for us the “5Ds model” to advance common goals of decarbonization, democratization, digitization/digitalization, diversification, and minimizing disruption.

His fellow panelists from Germany, Austria, and France described a critical energy challenge facing OSCE participating States: even as countries transition to renewables, the current capacity of wind and solar energy installations cannot fully meet seasonal energy demands, at least in the coming years. Diversification of fuel types and sources, together with technological advancements and efficiency improvements, can help participating States move towards a cleaner and more secure energy sector. As we heard, even countries that have committed to closing all nuclear and coal power plants recognize that the last nuclear plant will close only perhaps in 2022, and the last coal plant by 2050. In the immediate future, our common goal is efficiency.

The United States agrees with the expert panelist from Slovakia that a policy answer to these complex and rapid changes is to not over-regulate, but rather to create a framework within which the private sector can take the lead. The private sector knows best how to use new technologies to promote good governance and efficiency in the energy sector. As we heard, smart grids at the household and village levels, and possibly beyond, for instance, are helping reduce energy dependence on larger, sometimes unreliable, networks. Smart grids offer a private sector-driven solution to energy security, fostered by business-friendly legal and regulatory frameworks.

This leads to the overarching role of governments. Again, our policies should support frameworks giving space to the private sector to act, but our citizens must trust that the government is acting in citizens’ interest, is not corrupt, and is looking out for their security. The Open Government Partnership (OGP) is an existing platform for sharing best practices between states. As we heard this morning from Ambassador von Arx, Kyrgyzstan, with support from the OSCE Office there, is making good use of its new OGP membership and developing a National Action Plan to fight corruption, recognizing digitalization as a useful tool. Fighting corruption remains a top U.S. priority across the OSCE. It is a fundamental component for security and prosperity, without which, few of the other efforts in energy security will take root. Driving the fight against corruption and digitalization of government services is the democratic idea to which we have all committed: to make governments responsive to its citizens.

In conclusion, smart grids for electricity, energy efficiency, addressing corruption in the energy sector, and making use of digitalization for the purpose of making governments more responsive, in a secure way, to its citizens are four areas that are ripe for cooperation among all participating States. They address our common objectives, challenges, and commitments as we strive to promote economic and environmental security throughout the region. We look forward to seeing this conversation move further forward in Bratislava in May.