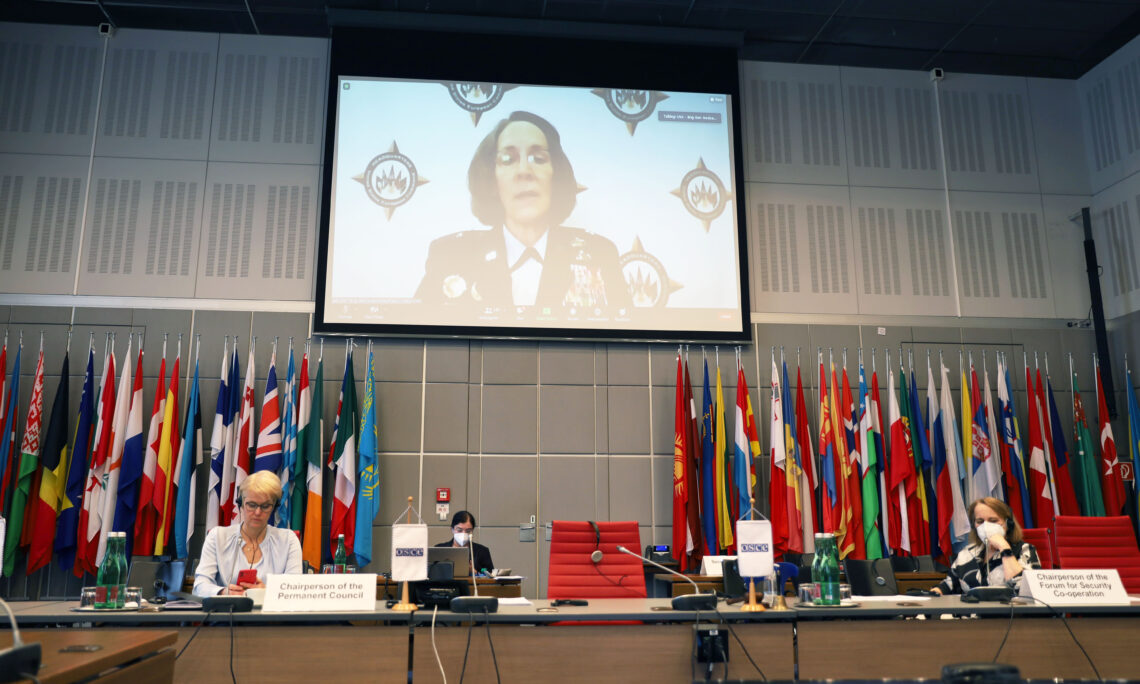 Ulrika Funered, Chairperson of the OSCE Permanent Council, Jessica Meyeraan, Brigadier General of the United States Air Force and Deputy Director of Partnering and Missile Defense at U.S. European Command (on screen) and Courtney E. Austrian, Chargé d'Affaires of the U.S. Mission to the OSCE at the

VIENNA, 10 March 2021 — Progress has been made since the adoption of United Nations Security Council Resolution (UNSCR) 1325 on Women, Peace and Security more than 20 years ago, but more concrete actions are needed, said participants at the joint meeting of the OSCE Forum for Security Co-operation (FSC) and the OSCE Permanent Council held online today to mark International Women’s Day this week.

The joint session, organized under the United States’ FSC Chairpersonship and Sweden’s 2021 OSCE Chairpersonship, provided a platform for discussing UNSCR 1325 and subsequent resolutions, and concrete steps toward the resolutions’ implementation, as well as gender equality more broadly. It also explored how the FSC and the OSCE work to integrate and empower women in the security sector and the fields of arms control, disarmament, and non-proliferation.

Adopted in October 2000, UNSCR 1325 is a landmark document addressing the disproportionate and unique impact of armed conflict on women and girls, recognizing the importance of women’s equal participation in maintaining and promoting peace and security, and the need to enhance protection of women and girls and their rights. UNSCR 1325 and subsequent resolutions provide a framework for furthering the role of women in matters of peace and security at all levels.

Stating that women often are “strong actors that facilitate positive change and conflict management in their communities”, Chairperson of the OSCE Permanent Council, Ambassador Ulrika Funered said, “We have come far on the path to gender equality, but much is still left to be done. Twenty years since the adoption of UNSCR 1325, the figures speak for themselves — it is not good enough.” She emphasized that, “research and knowledge on the role women can and should play in peace processes must turn into prompt action and real implementation on the ground.”

While progress has been made, women are far too often facing unequal access to important decision-making fora on security policies, said OSCE Secretary General Helga Maria Schmid. “Peace agreements carry a higher risk of falling apart when women are not included in the negotiation process. The evidence is absolutely empirical. So ensuring women’s equal participation in matters of peace and security will benefit us all.” She outlined how the OSCE proactively supports the implementation of the Women, Peace, and Security agenda, including through the OSCE Action Plan for the Promotion of Gender Equality, as part of its comprehensive approach to security.

Reflecting on the growing role of women in the United States military over the last 30 years, Jessica Meyeraan, Brigadier General of the United States Air Force and Deputy Director of Partnering and Missile Defense at U.S. European Command, shared her perspective on why gender equality matters in peace and security.

“Women frame problems, apply experiences, demonstrate important sensitivities, attend to details, and present considerations in a way that can have a powerfully positive impact on peace and security,” she said. “When we work to shatter antiquated gender expectations, change social and cultural factors and acknowledge intellectual equality between women and men, we can actually make a difference.”

Recalling efforts by OSCE participating States to support UNSCR 1325 at the 2020 Ministerial Council, Alexandra Bell, Deputy Assistant Secretary of the United States Department of State’s Bureau of Arms Control, Verification and Compliance, said it is time to turn discussions into action. “Provide women with capacity-building, access to decision-making opportunities, and the protection necessary to allow for full and meaningful participation in our security work in the FSC.”

Closing the meeting, Chantal de Jonge Oudraat, President of Women in International Security, laid out research on the Women, Peace, and Security agenda and proposed three inter-related projects to help advance gender equality to strengthen security throughout society and the FSC’s objectives on transparency and trust and confidence-building.