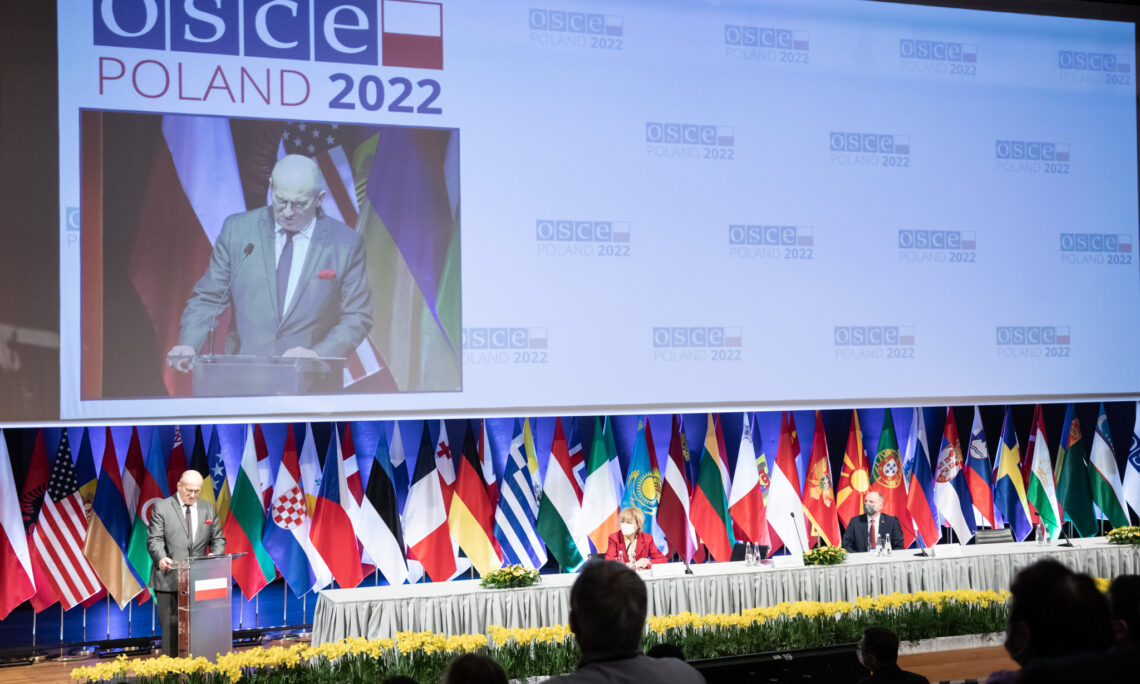 OSCE Chairman-in-Office and Minister for Foreign Affairs of Poland Zbigniew Rau addressing a conference on Combating Anti-Semitism in the OSCE Region on 8 February 2022 in Warsaw. (OSCE)

Remarks for the Conference on Combating Antisemitism in the OSCE Region

I appreciate this opportunity to amplify the Biden-Harris Administration’s commitment to combating antisemitism.

We have witnessed an alarming rise in antisemitism around the world for close to two decades.  We all are aware of the fear felt by of the Jewish communities in the OSCE region.  Jews continue to be violently attacked, their cemeteries and synagogues desecrated.  Jews are harassed both in the streets and online.

Last month, in Texas, in a scene that has become all too familiar and ever more terrifying, we saw a group of people gathering to worship held hostage and threatened with death on account of their Jewish faith.  As President Biden said after the attack, “We will stand against antisemitism and against the rise of extremism in this country.  That is who we are.”

We will fight for a day when attending synagogue to pray does not, in fact, require an act of courage.

Manifestations of antisemitism are often the first indicators of a growing sickness in a society that, if left unchecked, can give space for other intolerances such as anti-Muslim hatred, discrimination against persons with disabilities, xenophobia, antigypsyism and other forms of racism, misogyny, and LGBTQI+ discrimination.  The growth of antisemitism and these other hatreds undermines the structures and values that support democratic institutions and responsible, rights-respecting governments. Thus, the rise in hatred against Jews — a terrible evil unto itself — also is a fundamental challenge to human rights and democratic principles.

In December, President Biden hosted the first Summit for Democracy to bring together leaders from government, civil society, and the private sector to set a shared agenda for democratic renewal.  We see the fight against antisemitism, and other forms of intolerance, as a critical aspect of the Year of Action leading up to a second Summit at the end of this year or beginning of next.

In the OSCE region and around the world, the response to antisemitism by all people and governments needs to be concerted and comprehensive.  At Sweden’s Malmö International Forum on Holocaust Remembrance and Combating Antisemitism last October, Secretary Blinken emphasized the United States’s firm commitment to promoting Holocaust remembrance and countering rising global antisemitism.

Recognizing the many forms that antisemitism takes is fundamental to addressing it effectively.  That is why the Biden-Harris Administration enthusiastically embraces the IHRA legally non-binding Working Definition of antisemitism, including its examples, as have preceding U.S. administrations of both political parties.  We encourage all participating States that have not yet embraced the working definition to do so and put it into practice.

When we speak about what antisemitism is, we must also recognize what isn’t manifestly an expression of this hatred.  Recklessly blurring the line or falsely weaponizing the charge of antisemitism harms the overall fight and downplays the real physical and societal danger of antisemites.

As the IHRA working definition makes clear, Holocaust denial and distortion can be a form of antisemitism.  The United States was proud to cosponsor the recent UN resolution on Holocaust Denial, which was adopted with overwhelming support.

It is our collective moral duty to oppose those who traffic in pernicious stereotypes and lies.  For example, outrageous conspiracy theories have proliferated, such as falsely blaming Jews for creating, deliberately spreading, and profiting from COVID-19.  We must reject the efforts of those who deliberately distort history to promote their contemporary political agendas.  We must also condemn attempts to rehabilitate long-dead antisemites and vicious nationalists as heroes to new generations.

There are many ways to combat antisemitism, and the discussions we are about to have will identify some of those that are the most practical and promising.  For our part, U.S. priorities include:  promoting security of Jewish communities;  countering antisemitism in the media, including social media, while respecting freedom of expression; encouraging governments to address Holocaust issues accurately; honoring pledges made at the Malmö Forum; and educating diverse communities about antisemitism.

Sustained, resolute commitment from all is needed.  That is why the United States strongly supports the OSCE Office for Democratic Institutions and Human Rights Tolerance and Nondiscrimination Department, and its pioneering work against antisemitism.

Let me now voice a serious religious freedom concern affecting the viability of Jewish, as well as Muslim, communities in some OSCE participating States.  Some countries already have laws, and in others such legislation has been proposed, banning non-medical circumcision and ritual slaughter.  Such bans on religious practices have deeply negative impacts – not just on Jewish and Muslim communities – but on broader free and inclusive societies.

In closing, though I am not with you today in person, I am mindful of the significance of the location chosen for this conference. This museum, displaying a thousand years of the rich culture and heritage of Jews in Poland, and dedicated to promoting openness, tolerance and historical truth, was built on the site of the former Warsaw Ghetto.  It shows what we can achieve if we stand up to hate and embrace the values that unite us.

My colleagues and I look forward to working with all of you here today, the Chairmanship, its invaluable Personal Representative Rabbi Andrew Baker, and with partners of good will throughout the OSCE region, to combat antisemitism and all forms of intolerance.

I applaud the Polish Chair’s leadership, and I thank you for giving me the floor.