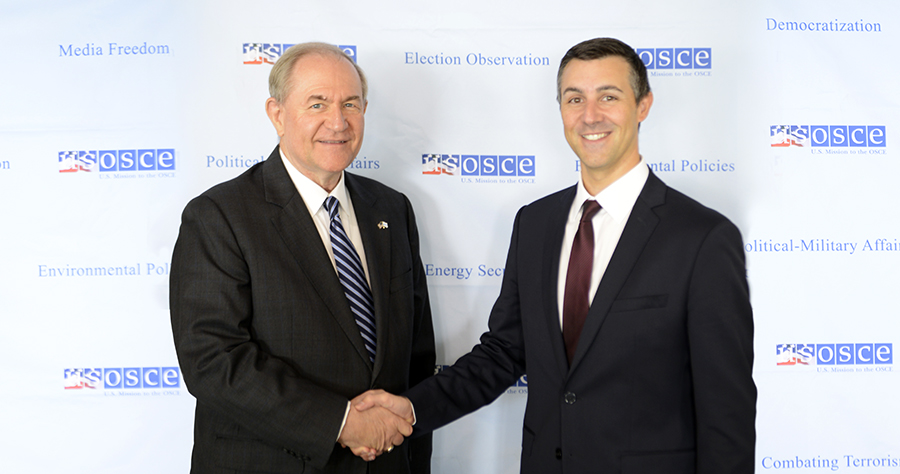 USOSCE Ambassador James Gilmore and Ambassador Neil Bush, Head of the United Kingdom’s delegation to the Organization for Security and Cooperation in Europe (OSCE), met on August 29 to confer on vital emerging foreign policy for the two countries. “The UK and the U.S. reaffirmed the close alliance between the two nations,” Ambassador Gilmore said.

Ambassador Gilmore welcomed the United Kingdom’s consistent support and thoughtful engagement on Ukraine, noting that the United States “does not, nor will we ever, recognize Russia’s purported annexation of Crimea.” Ambassadors Gilmore and Bush discussed the robust U.S.-UK support for the OSCE Special Monitoring Mission (SMM) in Ukraine, noting that combined, they are among the largest contributors to the OSCE, in general, and to the SMM in particular. “The Mission is a critical part of the OSCE’s response to the ongoing conflict. The Special Monitoring Mission remains our eyes and ears on the ground, and any restrictions placed on our monitors must end,” Ambassador Gilmore emphasized.

Ambassador Gilmore emphasized that the United Kingdom is an important member of the Group of Friends of Georgia.

Ambassador Neil Bush began his career in government in 2011, serving in the UK Department on Energy and Climate. He joined the UK Foreign and Commonwealth Office in 2015, where he served as head of the department on the Arabian Peninsula (and Iran) until his appointment to the OSCE. Bush has professional experience in economics and international relations, having worked for the Bank of England, the World Bank Group and in the private sector. He studied at Columbia University and the London School of Economics.

James S. Gilmore III, Permanent Representative of the U.S. Mission to the Organization for Security and Cooperation in Europe, was sworn in as Ambassador on June 25, 2019. He was Virginia’s 68th Governor from 1998-2002. With his appointment of a former Governor, President Trump demonstrates the strong U.S. commitment to strategic multilateral engagement as well as peace and security throughout Europe and Eurasia. Ambassador Gilmore has dedicated much of his career to public service, serving in the U.S. Army, as a county prosecutor, and as Virginia’s Attorney General before his election as governor. He holds undergraduate and law degrees from the University of Virginia.