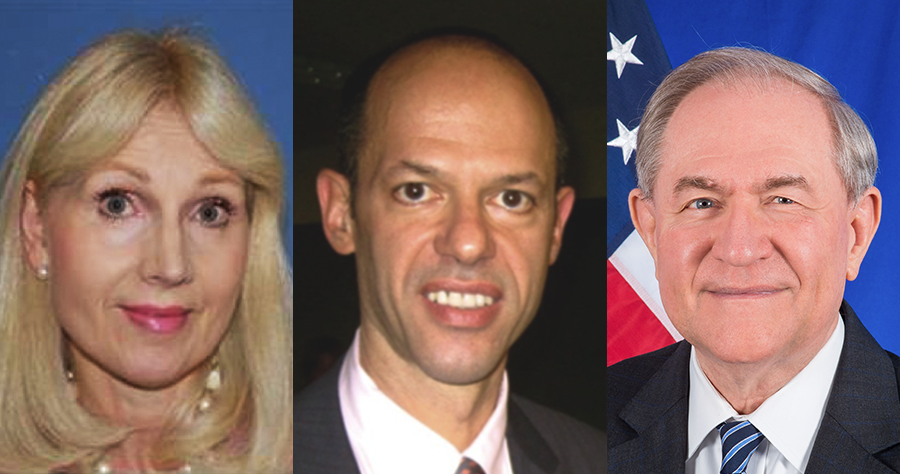 “Principles enshrined in the Helsinki Final Act are as applicable in 2019 as they were on its signing in 1975,” agreed USOSCE Ambassador James Gilmore, EU Head of Delegation Ioannis Vrailas, and Finnish OSCE Permanent Representative Päivi Laivola de Rosière at a working lunch August 27

Ambassador Gilmore yesterday met with Ambassadors Laivola de Rosière and Vrailas to commend deep and wide collaboration between the U.S. and EU delegations to the Organization for Security and Cooperation in Europe (OSCE), identify common challenges and possible methods to confront them, and pledge continued cooperation going forward. “Stability in Europe is in the United States’ national interest,” Ambassador Gilmore assured, “and you can count on the U.S. and this delegation to be an able and willing partner in this effort.” The core principles contained in the 1975 Helsinki Final Act should continue to guide participating States, the ambassadors concurred, and those countries violating them must face consequences. To illustrate, neither the United States nor the European Union would accept Russia’s purported annexation of Crimea nor the resetting of Europe’s borders by force.

Gilmore also expounded on several of his priorities as head of the U.S. Mission to the OSCE: to raise the organization’s profile in the United States and abroad and thus increase its effectiveness; to help restore Ukraine’s sovereignty and territorial integrity in the face of continued Russian aggression; and to facilitate increased election monitoring by OSCE institutions to fortify developing democracies in Europe and Eurasia.

Ambassador Päivi Laivola de Rosière has served as Finland’s Permanent Representative to the OSCE since 2017 and as the Representative of the EU Presidency since July 1. Prior to her arrival in Vienna, she was the director for Southeastern Europe at the Finnish Ministry of Foreign Affairs (MFA). Ambassador Laivola de Rosière also served as counselor in the unit for Arms Control, Disarmament, and Non-Proliferation at the MFA. She held positions at the embassies of Finland in Paris, Tokyo and Brussels, and at the permanent mission of Finland to the OSCE. Ambassador Laivola de Rosière joined the MFA in 1986.

Ambassador Ioannis Vrailas has served as Head of the Delegation of the European Union to the OSCE since 2017. Ambassador Vrailas joined the Greek MFA in 1985. From 1989 to 1991, Vrailas served as the assistant to the minister. He followed that assignment with tours at the Greek Permanent Representation to the European Union (twice), Greece’s mission to the United Nations in New York, bilateral mission in Tehran, and as deputy chief of mission in Washington. Ambassador Vrailas then was appointed deputy head of the delegation of the EU to the UN, a post he held from 2011 to 2016.

James S. Gilmore III, Permanent Representative of the U.S. Mission to the Organization for Security and Cooperation in Europe, was sworn in as Ambassador on June 25, 2019. He was Virginia’s 68th governor from 1998-2002. With his appointment of a former governor, President Trump demonstrates the strong U.S. commitment to strategic multilateral engagement as well as peace and security throughout Europe and Eurasia. Ambassador Gilmore has dedicated much of his career to public service, serving in the U.S. Army, as a county prosecutor, and as Virginia’s attorney general before his election as governor. He holds undergraduate and law degrees from the University of Virginia.