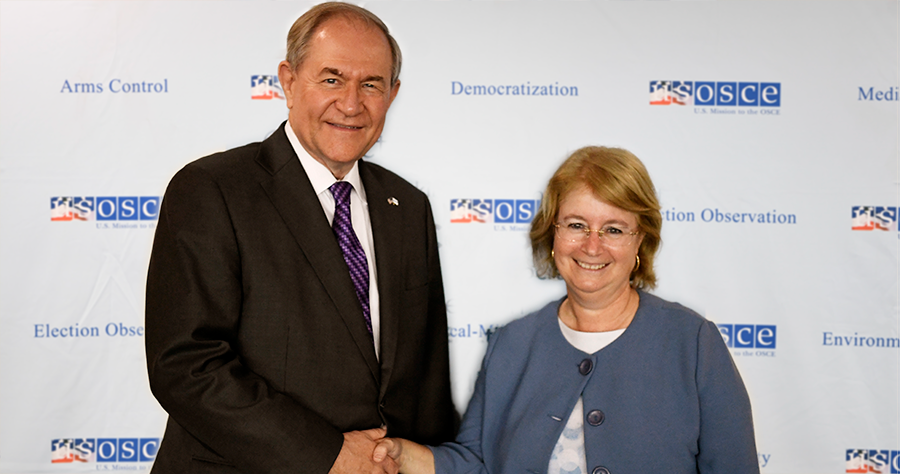 “The OSCE provides a valuable venue for the United States and Israel to strengthen cooperation with our Mediterranean Partners,” USOSCE Ambassador James Gilmore said at a meeting with Israel’s Ambassador to the OSCE Talya Lador-Fresher

USOSCE Ambassador James Gilmore met on August 20 with Ambassador Talya Lador-Fresher, Ambassador of the State of Israel to Austria and Permanent Representative to the Organization for Security and Cooperation in Europe (OSCE), to discuss the work of the OSCE and the ways in which the United States and Israel can better coordinate their efforts to enhance security for the OSCE participating States and their partners.

The United States has a long-standing history of combating anti-Semitism in all its forms, including through the State Department’s Office of the Special Envoy to Monitor and Combat Anti-Semitism. “Anti-Semitism is never justified and is never acceptable,” Ambassador Gilmore said, noting that combating anti-Semitism, intolerance, and discrimination will be discussed during Europe’s largest Human Rights Conference, the OSCE annual Human Dimension Implementation Meeting (HDIM), September 16-27, 2019 in Warsaw, Poland.

The OSCE maintains special relations with six Mediterranean Partners for Cooperation: Algeria, Egypt, Israel, Jordan, Morocco and Tunisia. Through ongoing dialogue and joint activities with Mediterranean Partners, the OSCE has been able to share its experience and provide insight into its unique comprehensive approach to security. For more, see: https://www.osce.org/partners-for-cooperation/mediterranean.

Ambassador Lador-Fresher is Israel’s envoy to Austria since November 2015. Ambassador Lador-Fresher is also accredited to the OSCE, the United Nations (UN), the United Nations Industrial Development Organization (UNIDO), and other International Organizations. She has served in Israeli missions in London, United Kingdom (2006-2010), and Kingston, Jamaica (1991-1993), as well as in Israel’s Consulate General in New York (1993-1997).

James S. Gilmore III, Permanent Representative of the U.S. Mission to the Organization for Security and Cooperation in Europe, was sworn in as Ambassador on June 25, 2019. He was Virginia’s 68th Governor from 1998-2002. With his appointment of a former Governor, President Trump demonstrates the strong U.S. commitment to strategic multilateral engagement as well as peace and security throughout Europe and Eurasia. Ambassador Gilmore has dedicated much of his career to public service, serving in the U.S. Army, as a county prosecutor, and as Virginia’s Attorney General before his election as governor. He holds undergraduate and law degrees from the University of Virginia.