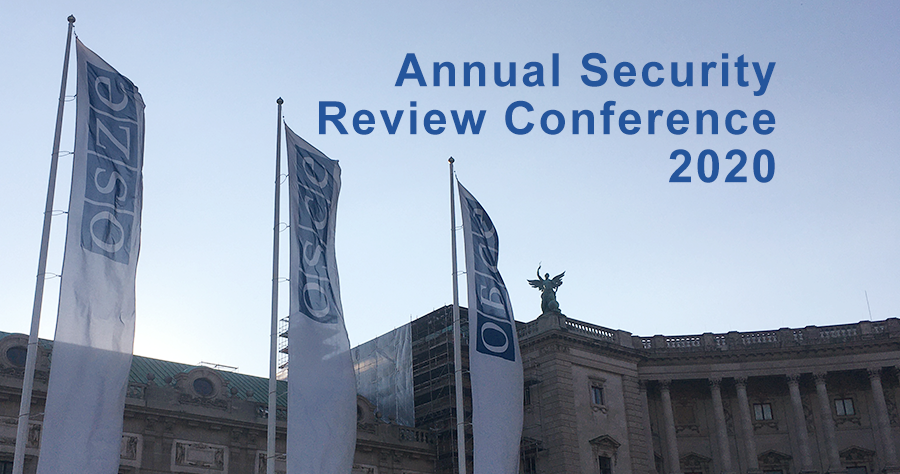 Annual Security Review Conference 2020
Special Session: Ensuring Security and Stability in the OSCE region in light of developments with respect to Ukraine

Thank you Mr. Secretary General. It’s really beyond my modest capacity to speak more eloquently as to the aggression that is going on in eastern Ukraine and Crimea than that that was done by Ambassador-at-large Herasymenko, who stated it all so eloquently. The Russian Federation, from time to time, claims to be nervous about actions that are taken by a country near it because they see, sometimes, these things as threatening, but yet countries have an obligation and a right to defend themselves from the Russian Federation. And not against threatened aggression, but against demonstrated aggression.

It has been over six years since Russia’s invasion of Ukraine and attempted annexation of Crimea. I wish I could speak today about the progress we have made in recent years to bring about a peaceful resolution to this conflict and the restoration of Ukraine’s territorial integrity. I wish we could collectively celebrate a comprehensive ceasefire, as outlined in the Minsk agreements and more recently in the Normandy 4 Summit in Paris. I wish we could applaud the full implementation of all Minsk commitments. I wish we could have witnessed Russia withdrawing its forces and equipment from Ukraine; disarming the forces it arms, trains, leads, finances, and fights alongside; and allowing Ukraine to implement its plans for local self-government for the Donbas. Regretfully, I can do none of these things.

Although Ukraine’s leaders have repeatedly demonstrated the political will to find a peaceful and diplomatic resolution to the conflict, Russia has instead chosen to deny its involvement in this multi-year conflict that has cost the lives of well over 13,000 men, women, and children. It attempts to mischaracterize the situation as an “internal conflict”, and has done so repeatedly here again today, allegations and mischaracterizations that have been unequivocally rejected by the international community. Sadly, this conflict seems to continue as long as Russia fails to implement its commitments and engage constructively.

The OSCE’s Special Monitoring Mission continues to play a critical role in monitoring and reporting on the situation on the ground, a mandate vested in this Mission by the participating States of this organization. Unacceptably, our monitors face harassment, restrictions, and interference by Russia-led forces on a daily basis; over the past several months those forces have used the guise of COVID-19 to further restrict the movements of SMM monitors– in direct contradiction of the SMM mandate. The United States condemns any attempts to interfere with, damage, or destroy the SMM’s valuable technological assets. These actions are unacceptable, and those who target the Mission’s assets should be held responsible, politically and financially. The United States calls upon Russia to direct the forces it arms, trains, finances, leads, and fights alongside in eastern Ukraine to cease their harassment of the SMM. The SMM should be allowed to fulfil its mandate, and fulfil its obligation to the countries that are represented here today.

Russia’s occupation of Crimea and its militarization of the peninsula remains a great concern. Russian occupation authorities continue their assault on human rights and fundamental freedoms, brutally silencing critics in civil society and the media, and curtailing religious freedom. More than 80 individuals from Crimea, including members of the Crimean Tatar community, have been imprisoned by Russia – some reportedly subjected to torture – for peaceful opposition to the occupation. Members of the Crimean Tatar community continue to experience unjustified raids on their homes and mosques, surveillance and intimidation by occupation authorities, restrictions on cultural events, and the criminalization of their representative body, the Mejlis. Since 2014, when the Kremlin first embarked on its multi-year campaign of conscription, which I have spoken to several times in this organization, nearly 24,000 young Crimean residents have been conscripted into the Russian Armed Forces. It is clear that Russia’s conscriptions of residents of Crimea into its armed forces are inconsistent with international humanitarian law applicable to belligerent occupation. Russia continues to limit religious freedom and target individuals belonging to ethnic and religious minority groups, including Crimean Tatars and Jehovah’s Witnesses. The United States calls on Russia to free all Ukrainians it has unjustly imprisoned for their peaceful dissent and to end Russian abuses of fundamental freedoms in Crimea. The Crimean invasion and occupation remain the bone in the throat of the peaceful security arrangements of the OSCE region.

The United States fully supports Ukraine’s sovereignty, independence, and territorial integrity within its internationally recognized borders. We do not, nor will we ever, recognize Russia’s purported annexation of Crimea. We reaffirm that Crimea is Ukraine. We join our European and other partners in affirming that our eastern Ukraine-related sanctions against Russia will remain in place until Russia fully implements its Minsk commitments. The Crimea-related sanctions will remain in place until Russia returns full control of the peninsula to Ukraine. We call on Russia to fulfill its Minsk commitments and to cease interference with and harassment of the SMM, to cease its aggression and to begin the project of a better future for the Russian people.