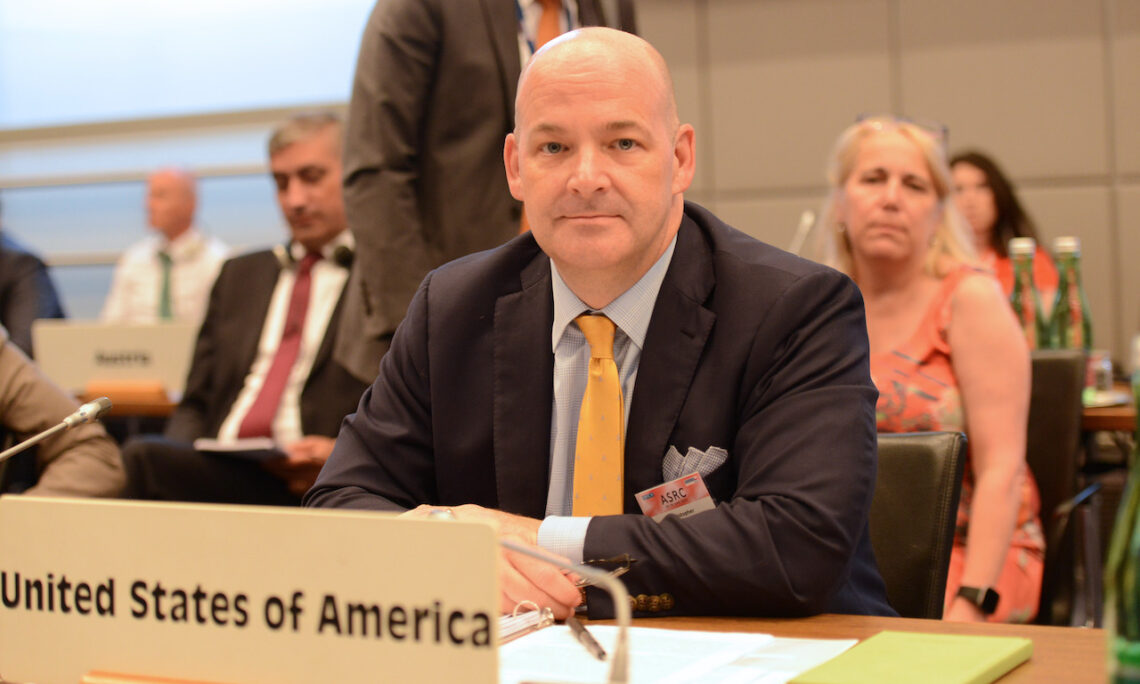 As delivered by Christopher Robinson,

Before I start I, too, want to express my condolences.

Like my Georgian colleague, I was horrified to learn of Russia’s barbaric missile strike yesterday on a crowded shopping mall in Kremenchuk, which followed dozens of missile strikes launched by Russia across Ukraine over the preceding days.  The gruesome pictures and the eyewitness accounts emerging from Kremenchuk stand as a stark reminder for us all that Russia’s atrocities against Ukrainian civilians know no limits.  And I join my Georgian colleague, and I am sure many others, in expressing my deep condolences for the loss of lives, and we affirm our continuing resolve to provide Ukraine all the support it requires to defend itself against Russia’s vicious and unprovoked war.

Mr. Chairman, I am pleased to join you finally for this year’s ASRC in person, and I thank the Chair for your tireless efforts to bring this meeting to pass.

Colleagues, I regret that this meeting is taking place in an abbreviated format but understand the necessity of focusing on the unprecedented crisis in European security.  In years prior, the ASRC served as a platform for us to reflect on core first dimension issues, such as the protracted conflicts, and emerging and transnational threats.  These issues are imperative; they affect our overall security environment.  Today, however, the focus of this ASRC must be on the wholesale disruption of Europe’s security environment that has resulted from Russia’s brutal aggression against Ukraine.  It has caused catastrophic loss of life and human suffering.  It has had an indelible impact on our common security.  We must devote all of the energies of this Organization to addressing its impacts and putting an end to the brutal war Russia has unleashed on Ukraine.

The April Moscow Mechanism report validated our grave concerns about the devastating humanitarian and human rights impacts of Russia’s invasion of Ukraine, and it seems certain that the second Moscow Mechanism report will provide further evidence of Russia’s brutality.  We are horrified by credible reports of Russia’s intentional targeting of civilians and indiscriminate bombardments that have killed and injured thousands of civilians across Ukraine.  We have seen the results of bombardments striking civilian objects such as railway stations, museums, hospitals, schools, and playgrounds.  In many cases, these facilities have been clearly identifiable, occupied, and even marked as in-use by civilians.  Russia’s brutal war has fueled a new, historic wave of migration that has resulted in millions of refugees fleeing Ukraine, with millions more displaced within Ukraine.  Moreover, Russia’s war has put countless millions more throughout the world at risk of acute food insecurity.

Russia’s massive and ongoing invasion of Ukraine has upended the cooperative European security order our nations have worked to build since the Cold War.  Russia is attempting to subvert international peace and security and OSCE principles and commitments.   This visible barbarity of this war takes us back to dark periods in Europe’s history when armed aggression, fueled by cold-blooded ignorance and intolerance, defined the European order.  But Russia will be held accountable, and we are more united than ever.

In the United States and the trans-Atlantic community, Russia’s attempted subversion of the European security order has yielded a fundamental rethinking of deterrence and defense.  In response to Russia’s war, the United States has enhanced its force posture in Europe.  Today, there are over 100,000 U.S. military personnel either permanently stationed or deployed to Europe.  The NATO Alliance has also taken significant steps to bolster its defense and deterrence posture to deter Russian aggression and reassure our Allies.  This is not by choice.  These posture adjustments are defensive and would not have taken place absent Russia having unleashed a full-scale war against Ukraine.

The United States has reaffirmed its commitment to stand by Ukraine as it defends its democracy and to support its sovereignty and territorial integrity in the face of Russia’s aggression.  This includes providing approximately $6.8 billion in military assistance since the beginning of the Biden-Harris Administration in January 2021. In addition, the U.S. has provided over $1 billion in direct economic support to the Ukrainian government and nearly $914 million in humanitarian assistance in response to the crisis this year alone.  We will continue to work with our Allies and Partners to support Ukraine’s fight for freedom and to aid the Ukrainian people.

Russia’s aggression over the course of this year demonstrates its lack of respect for the foundational principles underpinning European security, already evident in its 2008 and 2014 invasions of Georgia and Ukraine.  For many years Russia violated its arms control commitments and obligations while refusing to engage in efforts to begin to rebuild military transparency in Europe through Vienna Document modernization.  As Russia amassed troops on Ukraine’s borders, it did not notify OSCE participating States of its activities and ignored Ukraine’s properly made request under Vienna Document paragraph 16.  Instead, Russia blatantly lied in the FSC on February 23, denying it had any intention of launching its invasion of Ukraine. Belarus in turn offered no substantive explanations under the Vienna Document, despite a request from the Baltic states under VDoc, as it prepared to abet Russia’s invasion.

The truth of Russia’s belligerent intent was revealed to us all on February 24.  Russia’s full-scale invasion is directly contrary to its legal obligations under the UN Charter and political commitments to European security.  Russia has demonstrated complete disregard for the Helsinki Final Act principles that all OSCE participating States have committed to uphold, among them:  sovereign equality and respect for the rights inherent in sovereignty; refraining from the threat or use of force; respect for the territorial integrity of states; and the peaceful settlement of disputes.

Russia – and Russia alone – bears sole responsibility for the drastic impact its actions have had in the European and international security environment today.  Putin has failed in his initial military objective to dominate Ukraine – but he has succeeded in making Russia a global pariah.  There is a global consensus that the conduct of the Russian state is intolerable and those responsible must not go unpunished for unleashing such brutality and blatantly contravening the principles that undergird international peace and security.

In this unprecedented situation, what is the OSCE’s role?  First, this community must bear witness and ensure accountability.  That is happening and it will continue to happen, not only in the Permanent Council but in the reports of the Moscow Mechanism experts and the work of individual participating States – including our Chair-in-Office – to receive and support refugees from this horrible conflict.  We can support Ukraine’s self-defense needs.  We can sanction those in Russia who are perpetrators of this destruction and help to hold them to account.  But we must do more.  We must find ways to ensure OSCE’s relevance to the lives of people affected by this conflict.  We must support our field missions, our observation missions, and our outreach beyond Europe’s borders.  This model of international – and moral – behavior that the OSCE is founded on requires of us a commitment not only to help Ukraine, but to help all those affected by this war – including those suffering globally from food insecurity as a direct result of Russia’s actions.  We call on the Russian Federation to end this war, and to end its blocking of Ukraine’s Black Sea trade, most crucially, in trade of grain products that threatens 47 million souls with starvation.

Diplomacy, of course, is the only way to end this war, but Russia has shown no signs that it is ready to end its war of choice and or any willingness to seriously engage in negotiations.  I hope that that will change.  I hope that when we meet again next year, we will be in a position to explore how we can work together to pick up the pieces of Russia’s destruction and begin to rebuild the European – and global – security environment.