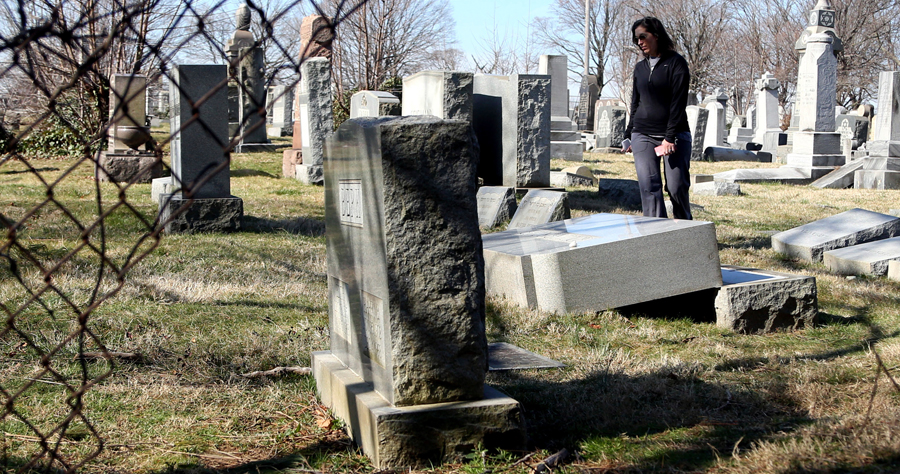 Stacy Biscardi searches the grounds of Mount Carmel Cemetery for a relatives' grave Tuesday, Feb. 28, 2017, in Philadelphia. Scores of volunteers are expected to help in an organized effort to clean up and restore the Jewish cemetery where vandals damaged hundreds of headstones. (AP Photo/Jacqueline

Anti-Semitic Incidents in the United States

At the 2014 OSCE Ministerial, the United States joined all other OSCE participating States in expressing their “concern at the disconcerting number of anti-Semitic incidents that continue to take place in the OSCE area and remain a challenge to stability and security.” We called upon one another to “encourage political leaders and public figures to speak out strongly and promptly when anti-Semitic incidents occur; investigate effectively, promptly and impartially acts of violence motivated by anti-Semitism and prosecute those responsible; and promote and facilitate open and transparent intercultural, interfaith and interreligious dialogue and partnerships.” The United States has consistently called upon all OSCE participating States to address anti-Semitism, intolerance, and hate crimes, and has supported OSCE efforts to assist participating States in doing so.

We are deeply saddened to report to the Permanent Council on a recent wave of anti-Semitic incidents in the United States, which include threats made against Jewish community centers and schools, and vandalism at Jewish cemeteries. Civil society organizations report that in January and February of 2017, there have been 89 separate incidents in which threats were made against 72 Jewish institutions in 30 different U.S. states. At least 21 Jewish community centers and Jewish schools across the country received bomb threats on February 27 alone. In addition, Philadelphia police reported that on the night of February 25, more than 100 gravestones in the city’s Mount Carmel Jewish cemetery had been vandalized. Last week, more than 150 gravestones were toppled at Chesed Shel Emeth Cemetery located in a suburb of St. Louis, Missouri.

In response to these incidents, during Tuesday night’s address to a joint session of Congress, President Trump stated that, “Recent threats targeting Jewish community centers and vandalism of Jewish cemeteries… remind us that while we may be a nation divided on policies, we are a country that stands united in condemning hate and evil in all its forms.” Vice President Pence visited the Chesed Shel Emeth Cemetery, where he stated “we condemn this vile act of vandalism and those who perpetuate it in the strongest possible terms.”

Civil society organizations have called on the U.S. government to take immediate action in response to these anti-Semitic incidents. Some civil society organizations and individuals have been critical of the response to date by the President and the U.S. government. Such activism is an integral part of the response to anti-Semitism, hate crimes, and intolerance. In Philadelphia, residents representing multiple faiths gathered at Mount Carmel Cemetery to help upright the gravestones. An online campaign spearheaded by Muslim Americans launched to help repair the Chesed Shel Emeth Cemetery has raised nearly $155,000, and will also assist with repairs in Philadelphia, as well as vandalism done to Jewish community centers. Christian clergy and volunteers also participated in the clean-up of the Chesed Shel Emeth Cemetery. These and other actions by individuals and organizations demonstrate how civil society plays a pertinent role in the fight against hate crimes and intolerance, including by bringing diverse communities together.

We will update the Permanent Council on efforts by local and federal authorities to address these anti-Semitic incidents, as well as on broader efforts to address anti-Semitism, intolerance, and hate crimes in the United States.