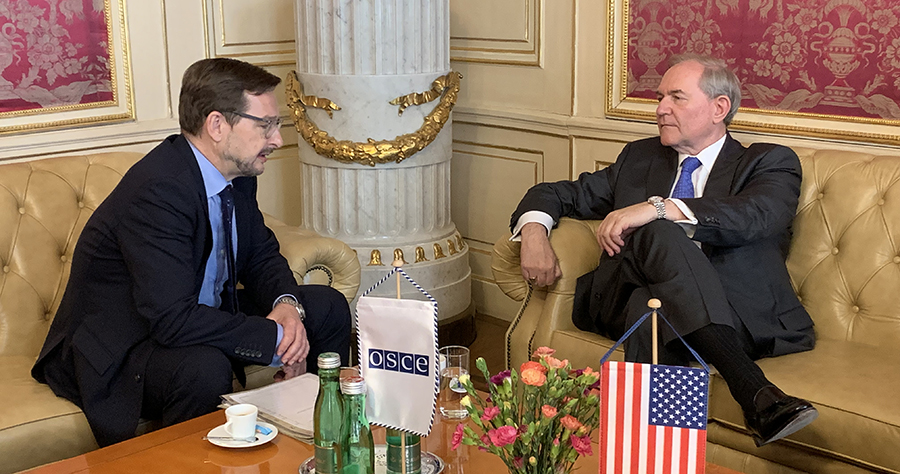 Arrival of James Gilmore, New U.S. Ambassador to the Organization for Security and Cooperation in Europe

James S. Gilmore III, Permanent Representative of the U.S. Mission to the Organization for Security and Cooperation in Europe (OSCE), with the rank of Ambassador, arrived in Vienna, Austria, this morning. He was greeted by Deputy Chief of Mission Harry Kamian.

Mr. Gilmore was sworn in as Ambassador on June 25, 2019, having been confirmed by the U.S. Senate on May 23. He presented his credentials to OSCE Secretary General Thomas Greminger today.

In his testimony before the Senate Foreign Relations Committee on April 9, 2019, Ambassador Gilmore called the OSCE “an indispensable pillar of the security architecture that has served the United States well for generations.” During his swearing-in ceremony on June 25, Ambassador Gilmore pledged “to maintain our strong U.S. leadership across the OSCE’s political, economic and environmental, and human dimensions.” He added that he “will work to promote that enduring principle of freedom that our Founding Fathers sought to secure, and which remains a beacon of peace and security to the countries that join together in the OSCE.”

With his appointment of a former Governor, President Trump demonstrates the strong U.S. commitment to strategic multilateral engagement as well as peace and security throughout Europe and Eurasia. Ambassador Gilmore looks forward to working with Secretary of State Pompeo and his team to advance U.S. goals, communication, and relationships with OSCE participating States.

Ambassador Gilmore has dedicated much of his career to public service, serving in the U.S. Army, as a county prosecutor, as Virginia’s Attorney General, and as Virginia’s 68th Governor (1998-2002). He holds undergraduate and law degrees from the University of Virginia. He is married to Roxane Gatling Gilmore, and they have two adult sons.

U.S. Mission to the OSCE
Elaine A. Paplos, Counselor for Public Affairs