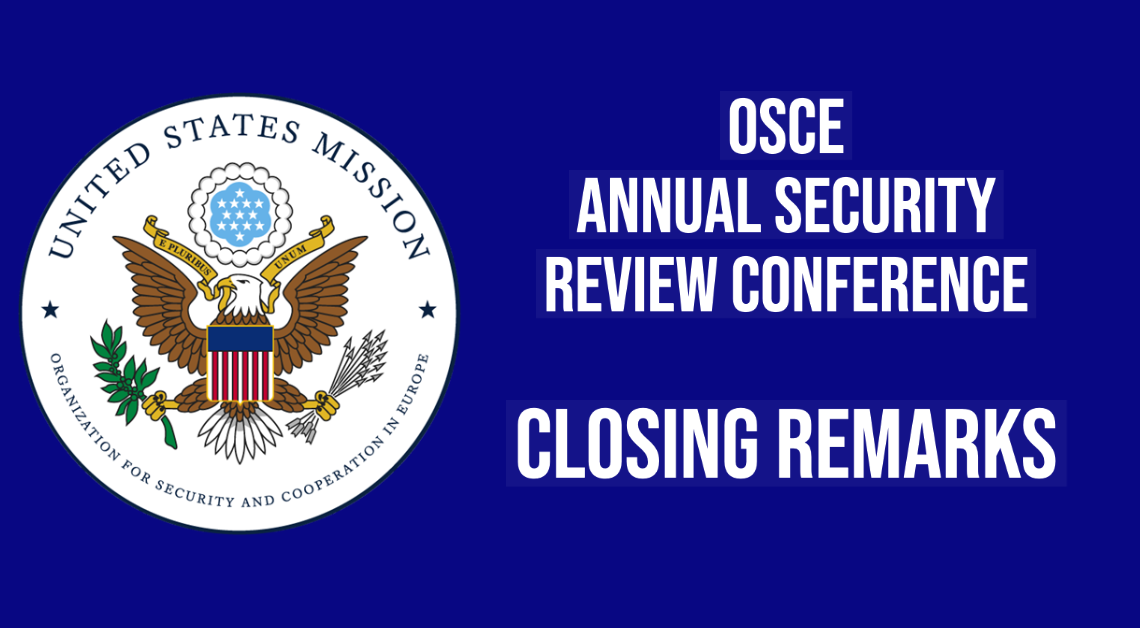 Although COVID has impacted security across all three dimensions, most of the threats and concerns we face today are the same as those we dealt with before the pandemic.

I want to express my appreciation to the Swedish Chair for hosting a very successful Annual Security Review Conference, an accomplishment all the more impressive in light of the extended impasse we faced on procedural details for this annually-mandated conference.  I think it is safe to say we would all prefer to be meeting in-person, including with representation from capitals, but this week’s discussions have demonstrated why it is so important that we continue to exchange ideas on important security issues in whatever format possible, even as we identify and highlight specific challenges to security and lapses in fulfillment of commitments.

Accountability is essential in the first dimension; we likewise must continue to hold each other to account for fulfillment of our commitments in the human and economic dimensions.  It is past time for this organization to set dates for the 2021 HDIM.

Over the past two days, many delegations have expressed concern with the deterioration of the European security architecture, which is largely the result of the decisions of some OSCE participating States to pursue policies that are inconsistent with the rules-based international system to which they have formally committed themselves, and which forms the backbone of European security.

Russian aggression in Ukraine provides the clearest example of what happens when a pS decides to violate international law and core commitments.  Rather than accept responsibility for its actions and work constructively on resolving that conflict, Russia has denied its involvement in the conflict and failed to implement its commitments.  We reiterate our call on Russia to fully implement its commitments under the Minsk agreements.  The OSCE has a valuable role to play, notably through the Special Monitoring Mission (SMM), which serves as this organization’s eyes and ears on the ground, but also through the Border Observation Mission (BOM) – we hope Russia will direct the forces it arms, trains, leads, and fights alongside in eastern Ukraine to cease their harassment of the SMM and will join all participating States in extending the BOM mandate.

Although COVID has impacted security across all three dimensions, most of the threats and concerns we face today are the same as those we dealt with before the pandemic.  This is true in the context of Ukraine and the protracted conflicts; it is also true with regard to the erosion of military transparency and confidence in Europe, a process hastened not only by inadequate respect for commitments under core agreements and arrangements like CFE and the Vienna Document, but also by the proliferation of destabilizing hybrid activities and other new threats, which have transformed the European security environment.

There is more this organization can do to bring about a peaceful resolution of the conflicts in Ukraine, Moldova, and Georgia, as well as the Nagorno-Karabakh conflict.  We have offered some ideas, and we welcome ideas others may have.  What is clear is that the parties to the conflicts must demonstrate political will to work towards peaceful settlement, and all 57 pS must also demonstrate the political will to empower this Organization to meet its potential in this regard.  In the meantime, we should redouble our efforts to make existing mechanisms, such as the Geneva International Discussions and the Minsk Group Co-Chairs, as effective as possible in carrying out their mandates.

I am glad that the chair decided to include a special session on the Structured Dialogue.  Our exchange yesterday reiterated what we have heard in earlier SD discussion:  that one of the most pressing concerns remains the failure of some pS to fulfill commitments and obligations.  There are, of course, other serious concerns – including activities below the threshold of armed conflict, climate change, irregular migration, and terrorism, to name a few – which is exactly why the SD must remain open-ended, with no topic off limits.  We need to find a way to tackle these issues seriously and more systematically.

Many of the security concerns raised in the SD do not have arms control solutions.  But the United States, like most pS here, agrees that a substantive update of the Vienna Document would go a long way in beginning to rebuild military stability, predictability, and transparency.  I hope we can all work towards that objective.