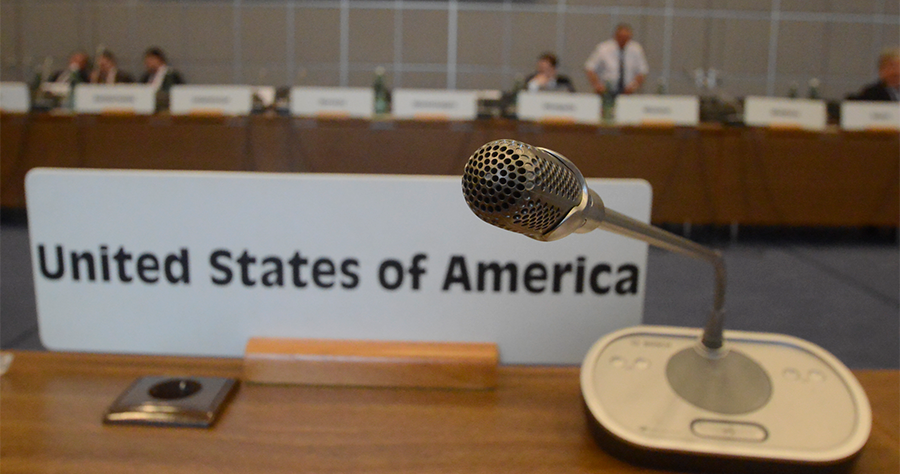 I want to begin by recognizing you, Ambassador Boender, for your efforts to advance the Structured Dialogue (SD) this year. Since its launch in Hamburg in 2016, the SD has provided a valuable forum for participating States (pS) to share their perspectives on the security threats and perceptions that drive their national policy agendas. This ASRC session is an ideal opportunity for all of us to take stock: what are 2019’s biggest challenges? What should the Structured Dialogue focus on in 2019 and onward? What do we want to achieve – or is dialogue sufficiently confidence building, in itself?

In April 2017, senior policy makers from throughout the OSCE community identified a rich range of top security concerns. That list included many issues historically addressed at the ASRC: hot conflicts in the OSCE region, such as Ukraine, the protracted conflicts, which are on this afternoon’s agenda, and the impact of transnational threats like migration and terrorism, as well as the need to implement and fully comply with existing arms control and CSBM instruments and take steps to rebuild military transparency in Europe. These are the focus for Thursday’s discussions.

Our SD discussions have gone beyond that, to make clear that nations share an acute concern about the failure of neighbors to respect the rule of law and abide by their legal obligations and political commitments. This lack of confidence in the intentions of neighbors has been and is, more than any other single factor, cited as the cause for an eroding European security environment – a disturbing trend which we have not yet been able to reverse.

Confidence in our neighbors’ intentions will not return soon, unless we act. The first practical steps are to talk openly and honestly about our security concerns and discuss them respectfully; and to identify concrete actions to help rebuild confidence. The SD is the right place for that first step: it is designed to facilitate constructive exchanges of concerns, and to allow expert follow up. Discussion of risk reduction and lack of military transparency has already revealed a formula for progress: the many SD sessions on these topics demonstrated a truth, repeated regularly by “experts.” The best way to give your neighbors confidence about your military plans and intentions is to share information in advance about your forces and military activities. It was true over thirty years ago and it remains true now. We need full implementation of basic Vienna Document measures by all pS as a starting point. And we need a modernized Vienna Document that is tailored to today’s military practices and challenges. That is a key lesson of the SD already and it should be a common goal.

In April 2017, and in sessions that followed, the Structured Dialogue zeroed in on a panoply of threats that were familiar to all, but nascent. In 2017, nearly all pS cited terrorism as a pervasive threat of high concern. Our discussion on this topic at the May SD exchange yielded a fruitful discussion and identified opportunities for future exchanges on the nexus of trafficking in SALW; money laundering; corruption and organized crime; and terrorism. We look forward to future SD discussions on this topic and other real world challenges that countries face every day.

High on that list of additional challenges for the SD in 2019-2020 would be hybrid and cyber threats. The United States is among the many partners in this room today that have confronted malign foreign influence activity aimed against our democratic process and our institutions at a level of sophistication that is completely unprecedented. I would never have anticipated that the issue of malign influence would take up so much of my time before I took my current job.

U.S. intelligence authorities concluded that Russia sought to influence the U.S. presidential elections in 2016. Twitter identified more than 3,800 automated accounts or “bots” using fake or misleading identities and piloted by the St. Petersburg Internet Research Agency, which served the objective of stoking discontent, provoking racial tensions, and suppressing voter turnout. Russian companies purchased over 3,500 ads on Facebook with those same goals, which the social media company identified, turned over to Congress, and made public. The goal of this malign influence activity appears to be nothing less than to erode confidence in democratic institutions and government itself. This type of covert, malign foreign influence campaign aimed at national electoral processes is – obviously – unacceptable.

The Structured Dialogue is a place to talk frankly about our experiences and our concerns. These actions are deeply destabilizing; we can and should consider whether OSCE – and the SD in particular – has a role to play in developing our common thinking on whether there are rules of the road that this organization should identify and develop. However, we are not there yet. We need to delve into the details of this challenge; we need to consider what should be done by states, by this organization, or by others.

I look forward to the Georgian delegation’s side event on the impact of hybrid issues in the context of that protracted conflict; my team recalls well the detailed briefing provided by Ukraine at the hybrid session of the SD last year.

We look forward to continuing our Structured Dialogue discussions at the September IWG, and welcome the focus on hybrid threats; there is scope for expert exchanges to share information on the range of issues our nations confront under this rubric.

Going forward, a major threat we must put on the table is the future challenge of control of cyber and other infrastructure. When does investment in new cyber infrastructure become a threat? Similarly, when is control over sources of energy a potential concern? We have all seen it happen. Our societies depend on reliable energy reserves of all kinds to power their computers, their phones, their cars, their homes. This is an energy interdependent community. What steps can we take to keep it independent?

It is important that the Structured Dialogue process continue without preconditions or preconceived conclusions, and with no artificial deadlines. We welcome the opportunity to shape this dialogue in a way that brings about frank and focused discussions on the full range of today’s most pressing security concerns in all three dimensions of the OSCE.