Home Home | News & Events | ASRC: Stability and Security in light of Developments with Respect to Ukraine 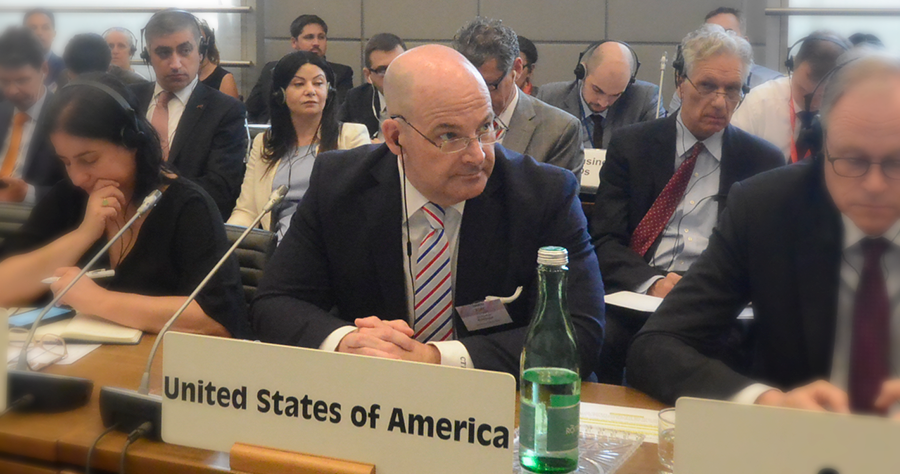 Annual Security Review Conference: Special Session on Ensuring Security and Stability in the OSCE region in Light of Developments with Respect to Ukraine

With the conflict in Ukraine now in its sixth year, we should collectively reflect on the impact it has had on the overall security environment in Europe as well as the human toll on civilians. This is an active conflict on a large scale within the OSCE community. My colleague Ambassador Volker and our other speakers have described better than I can the costs this conflict continues to inflict on local communities.

Let’s be clear. It is time for Russia to end the bloodshed. The first step is to implement a sustainable ceasefire, as outlined in the Minsk agreements. Russia must commit itself and the forces it arms, trains, leads, and fights alongside to respect a lasting ceasefire. Russia should then fully implement its Minsk commitments, including by withdrawing its forces and equipment from Ukraine, as well as facilitating the disarmament of illegal armed groups. Russia should also cease its support for the so-called “people’s republics” and allow Ukraine to move forward with its plans for local self-government for these regions. So long as Russia refuses to engage constructively, the conflict will go on and civilians will continue to endure unnecessary suffering.

In Russia-occupied Crimea, Russian authorities abuse and unjustly imprison those who oppose the occupation. In eastern Ukraine, civilians endure harassment, long wait times at crossings and checkpoints, and shelling and gunfire, resulting in the destruction of houses, schools, and businesses, as well as injuries and occasionally death. The sides need to establish and adhere to no-fire areas around the Donetsk Filtration Station and other key infrastructure sites. If Russia took this immediate step and respected a larger ceasefire, authorities could begin to address the humanitarian suffering. The path to peace and stability can only start when Russia implements its commitments.

I applaud the OSCE’s Special Monitoring Mission and the men and women working on the ground day in and day out to monitor and report on the situation in Ukraine. Their work is a vital part of the OSCE’s efforts to stem the violence and bring about lasting peace and stability. The safety of SMM monitors is paramount. Unfortunately, these monitors face routine harassment, restrictions, and interference by Russia-led forces. In just the past six months, Russia-led forces have restricted over 140 SMM patrols. Russia-led forces have also interfered with SMM UAVs, which have been jammed and fired upon repeatedly, in direct contravention of the SMM’s mandate. These actions are absolutely unacceptable. OSCE monitors can only do their job – which is to impartially report facts on the ground – if they have safe and secure access throughout the entire territory of Ukraine, including the full length of its international border with Russia. It is the responsibility of all OSCE participating States to take steps to ensure the safety, security, and freedom of movement of the SMM monitors. We can accept nothing less.

Russia’s occupation and militarization of Crimea and its aggressive actions against Ukraine in the Sea of Azov and the Kerch Strait over the past year pose a serious threat to security and stability in the Black Sea region. Following the partial opening of the Kerch Strait Bridge in May 2018, Russia initiated a campaign to harass and impede international commercial vessels transiting between the Black Sea and Ukrainian ports in the Sea of Azov. Then, under the guise of a military exercise in August 2018, Russia closed off for 24 hours a large portion of the Black Sea stretching between Crimea and the Romanian coast. Since November 25, when Russia attacked and then seized three Ukrainian vessels and 24 Ukrainian crewmembers near the Kerch Strait, Moscow has ignored the calls of the international community to return these ships and crew to Ukraine. The United States joins the many voices in this hall in calling upon Russia to immediately release the sailors and return the seized vessels to Ukraine in keeping with the May 25 order of the International Tribunal for the Law of the Sea. This would be an important demonstration of Russia’s readiness to engage constructively with Ukraine.

The United States’ support for Ukraine’s sovereignty and territorial integrity within its internationally recognized borders is unwavering. Ukraine-related sanctions on Russia will remain in place until Moscow fully implements the Minsk agreements. Our separate, Crimea-related sanctions will also remain in place until control of the peninsula is returned to Ukraine. To change this dynamic – a tension that undermines not only threat perceptions in the OSCE community but also the economic, social, and political potential of –the participating states — Russia must: fulfill its Minsk commitments; cease interference with the SMM, including blocking patrols and shooting at or jamming the SMM’s UAVs; and release ships and crewmembers detained following the Kerch Strait attack. The principles reflected in the Helsinki Final Act are right; the precepts that have governed this body for decades are viable and worthy. What is needed is for Russia to abide by them.