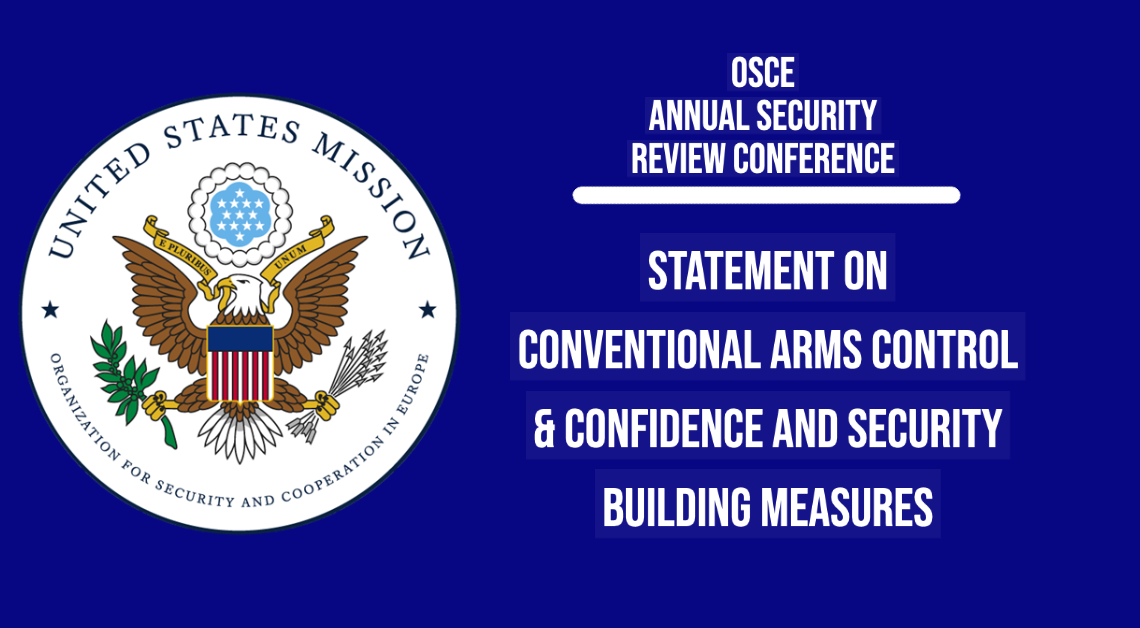 We continue to call on Russia not only to implement in full its existing commitments under the Vienna Document, but also to engage constructively on its modernization.

Thank you, Mr. Moderator, for convening this working session on Conventional Arms Control and Confidence and Security Building Measures. Thanks also to our French and Polish colleagues for their opening remarks.

As we look back over the last year of developments involving conventional arms control and confidence- and security- building measures (CSBMs), it’s clear the disruptions we faced as a result of the pandemic were only one facet of our challenges. As we have made repeatedly clear over the last several weeks, our primary concern remains the gradual erosion of our core conventional arms control agreements and CSBMs that, 25 years ago, promised to form a resilient web of mutually reinforcing obligations and commitments that would provide a solid foundation of transparency for security and peace. I will return to this topic momentarily, but I first wanted to highlight one conventional arms control mechanism that has continued to function as envisioned.

This is a tremendous accomplishment for the Parties to that agreement – Bosnia and Herzegovina, Croatia, Montenegro, and Serbia. The agreement has contributed to the restoration of peace and security since the end of the conflict, and has contributed to a stable military balance within the region. We applaud the Parties for continuing to implement the agreement professionally and in an atmosphere of full co-operation, trust, and openness.

Unfortunately, this atmosphere of full cooperation, trust, and openness does not prevail today in relation to the core Europe-wide conventional arms control mechanisms. The problem is not that the United States “torpedoes” agreements and commitments, but that Russia, with the possible exception of New START, does not implement them or prefers the shadows and ambiguity to the light and transparency.

Russia’s so-called “suspension” of its obligations under the Treaty on Conventional Armed Forces in Europe (CFE) in 2007; the conflict in Georgia in 2008; Russia’s continuing violation of Georgia’s and Ukraine’s sovereignty and territorial integrity, exacerbated by its purported annexation of Crimea in 2014 and its ongoing aggression in eastern Ukraine: all these have steadily eroded European security, undermined core Helsinki Final Act principles, and prevented the fulfillment of the Lisbon Framework’s aspirations.

And the trend continues to this day. On November 22, 2020, the United States withdrew from the Treaty on Open Skies (OST) due to long-standing Russian violations of that treaty, which I would remind Russia we attempted to resolve over many years. And Russia has now decided it prefers to withdraw from the Treaty rather than return to full compliance.

Russia’s behavior has also undermined the military transparency and confidence building that the Vienna Document has sustained over the years. Russia continues to exploit the VDoc’s special rules for no-notice snap exercises — clearly the most alarming type of exercise given the massed forces involved, the opportunity for surprise, and the experience of Ukraine, showing it prefers ambiguity to transparency, and uncertainty to predictability. By deciding not to issue notifications or provide voluntary briefs, and by refusing to honor its commitments to provide required explanations under the VDoc paragraph 16 risk reduction procedure that was recently invoked by Ukraine and others, Russia has unnecessarily raised tensions and threatened general stability in Europe. Such large-scale, no-notice military exercises near borders undermine confidence and efforts to promote transparency, reduce risk, and prevent dangerous incidents.

That is why we continue to call on Russia not only to implement in full its existing commitments under the Vienna Document, but also to engage constructively on its modernization. The joint proposal supported by 34 participating States to modernize the Vienna Document remains the most comprehensive and realistic approach to bolster stability and predictability, reduce risks, and promote military transparency. We urge all participating States to join us in taking these first steps to rebuild trust and make the Vienna Document more relevant to the current security environment.

The United States was pleased that 45 participating States at the Tirana Ministerial affirmed their readiness to modernize the Vienna Document. If Russia truly wants to bring about a “renaissance” in arms control and confidence building in Europe, as it stated in the June Structured Dialogue session, we encourage it to support negotiations – and advance its own ideas – on an updated Vienna Document as a first step towards this goal.