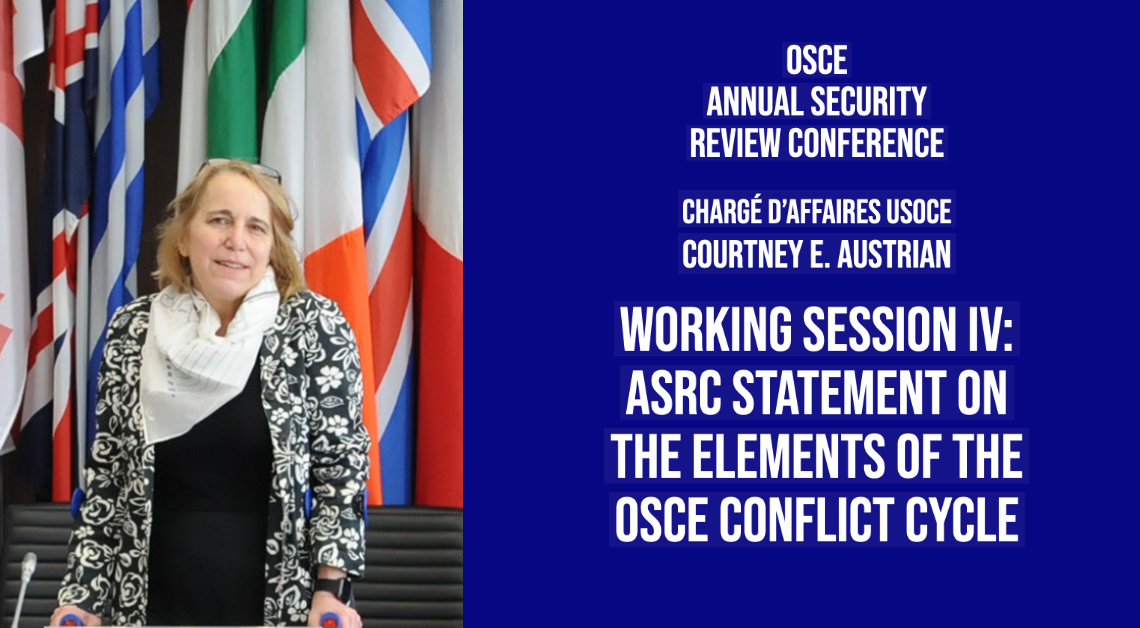 As we commemorate the 10th anniversary of the 2011 OSCE Ministerial decision on the Elements of the Conflict Cycle, we should consider the impact of this decision and what we can do to strengthen it moving forward.

ASRC Statement on the Elements of the OSCE Conflict Cycle

As prepared for delivery by Chargé Courtney Austrian
September 1, 2021

As we commemorate the 10th anniversary of the 2011 OSCE Ministerial decision on the Elements of the Conflict Cycle, we should consider the impact of this decision and what we can do to strengthen it moving forward.

Last year, several participating States delivered a joint statement emphasizing the need to adapt the conflict cycle toolbox to reflect current day realities.  This included calling on the Secretary General to consider ways to update MC Decision No. 3/11 and submitting it, as well as suggestions to better implement this mandate, for consideration.  We reaffirmed the significant role of women in the prevention and resolution of conflicts and in peace-building and urged progress on gender mainstreaming in the conflict cycle toolkit, with the aim of achieving the full and meaningful participation of women in peace processes in the OSCE.  We called on participating States to identify opportunities to use technology to enable virtual participation in conflict cycle discussions from a broad range of stakeholders, to include women and frequently under-represented voices.  Those ideas remain salient today.

Early warning of conflict remains a significant gap.  One way to address this would be through open-source data collection, analysis, and monitoring for early warning indicators.  During the Swedish Chair’s workshop on the conflict cycle last month, we heard that the Conflict Prevention Centre is working on a “situation room” concept to strengthen early warning, which would be a useful addition to our toolbox.  This could present an opportunity for us to integrate lessons learned, including from the OSCE SMM in Ukraine, into the OSCE’s monitoring work elsewhere, such as that conducted by the team of the CiO’s Personal Representative on the Conflict Dealt with by the Minsk Conference.

Crisis response is another area that deserves additional attention.  One aspect of the comprehensive Vienna Document (VDoc) modernization proposal tabled in 2019 and co-sponsored by 34 pS is revising VDoc’s risk reduction mechanism to permit “special inspections” of “unusual military activities.”  Similarly, the OSCE should develop an additional mechanism, as tasked by the 3/11 Ministerial decision, to enable the CiO, upon the request of a pS, to deploy a multinational fact-finding mission with a mandate to provide objective reporting on the situation on the ground at times of heightened tensions or in response to emerging crises.

We could also encourage the Conflict Prevention Centre to provide recommendations on confidence-building measures that could be funded by participating States, ways to involve more women in conflict resolution, and integrating a Women, Peace, and Security lens into the toolbox.  We welcome the CPC’s collaboration with the Gender Unit, field operations, and Special Representatives to gender-mainstream their work throughout the conflict cycle.

We should also find new ways to address the nexus between security and technology.  Technology has the power to help make conflict cycle processes from early warning to eventual peace more inclusive by giving a voice to women and groups who were either underrepresented or marginalized from conflict prevention and conflict resolution efforts.  At the same time, nefarious actors use technology to undermine these very processes, compromising both individual and regional security.  This nexus became even more apparent during the pandemic, as our lives moved online and our security was increasingly linked to our ability to conduct work via the Internet.

As we look towards the Ministerial Council, we should reflect on the security situation in the OSCE area and take stock of our work to promote comprehensive security.  This past year has witnessed intense fighting between Armenia and Azerbaijan, the largest massing since 2014 of Russia’s forces in occupied Crimea and along Ukraine’s border, Russia’s ongoing contraventions and selective implementation of multiple arms control commitments and obligations, its notification of withdrawal from the Treaty on Open Skies, and other worrisome developments.  Russia continues to undermine Georgia’s sovereignty and violate its territorial integrity; and the Transnistrian Settlement Process remains no closer to fruition.

One of the greatest strengths of this organization is its network of field operations, which provide invaluable support to host countries to help them uphold their commitments to strengthen security and provide objective and timely reporting of developments on the ground.  This organization can enhance its impact across all stages of the conflict cycle by deploying new field missions and programs.  For instance, we have repeatedly called for the re-establishment of an OSCE field mission in Georgia, as well as a stronger OSCE presence throughout the south Caucasus.

The simple fact is we do not lack good ideas to update our conflict cycle toolbox and enhance its effectiveness; what we need is the political will to do so.  We call on all participating States to look for ways to contribute towards building that political will where it is absent.