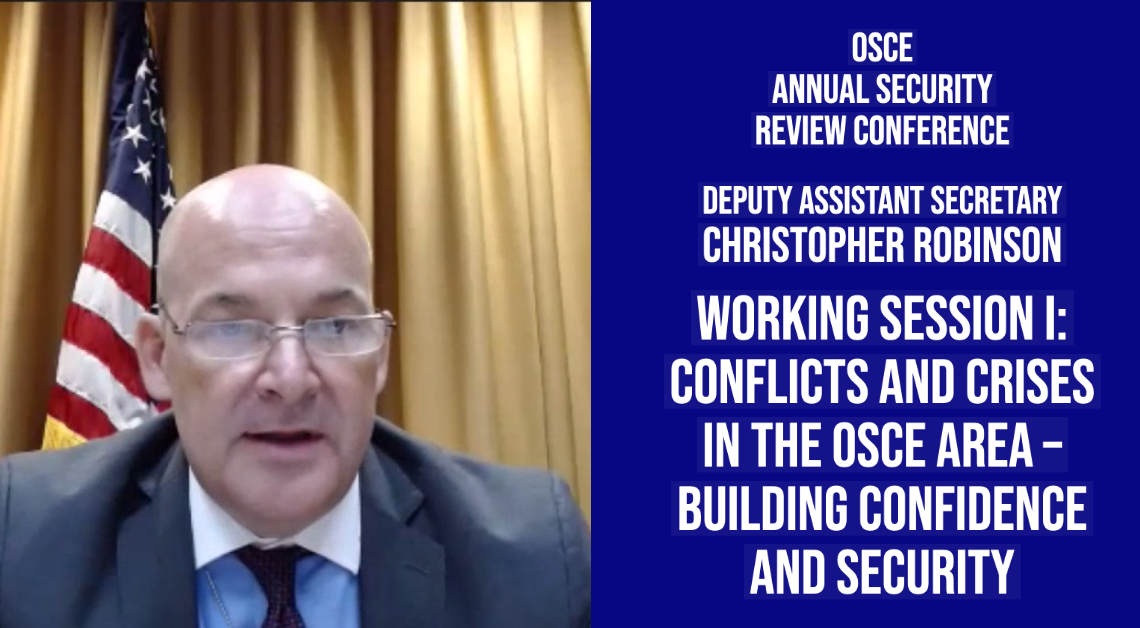 The United States looks forward to contributing to the resolution of the protracted conflicts as we prepare for the Ministerial Council this December.

Working Session I:  Conflicts and Crises in the OSCE area –

Over the past several years, with some exceptions, our interventions at this session of the ASRC have typically expressed regret for the lack of progress in resolving the protracted conflicts in Georgia and Moldova and the Nagorno-Karabakh conflict.  We’ve called on all participating States to fully implement their commitments and obligations, including respect for the sovereignty and territorial integrity of its neighbors.  We’ve asked all stakeholders to take urgent steps to help the OSCE to build trust and confidence and increase transparency regarding the actual situation on the ground to set the stage for real progress in resolving these conflicts.  Although positive steps towards resolving these conflicts have been rare, in most years we’ve at least been able to say that “instances of actual violence on the ground are few.”  Unfortunately, that is not the case today.

In the Nagorno-Karabakh conflict, the renewed fighting we saw in October and November of 2020 was deeply troubling and risked destabilizing the entire South Caucasus region.  We regret the loss of life and welcome the cessation of the most intense fighting in November.  Unfortunately, recent escalations of tensions along the Armenia-Azerbaijan border pose serious risks to the ceasefire and highlight the fragility of the current state-of-affairs.  The United States rejects the use of force to demarcate the border or any military fortification of the non-demarcated border.

We must all recognize there cannot be significant progress toward a sustainable and peaceful solution to the conflict until both sides are prepared to consider real steps—including difficult compromises—to resolve complex outstanding issues, including by preparing their populations for peace.  A comprehensive agreement that addresses the core concerns of both sides is essential to reconciliation between Armenia and Azerbaijan and enabling an environment for the people of both countries to live together peacefully.

This protracted conflict has taken a terrible toll on local communities.  The time for reaching a lasting peace is now.   As a Co-Chair of the OSCE Minsk Group, the United States remains committed to helping Armenia and Azerbaijan reach a permanent settlement to this conflict on the basis of the principles of the Helsinki Final Act.  We urge the sides to reengage with the Minsk Group Co-Chairs and each other in good faith and without preconditions as soon as possible in order to move toward this goal.

In Georgia, Russia’s occupation of the Georgian regions of Abkhazia and South Ossetia is an ongoing violation of Russia’s international commitments, including under the Helsinki Act, and poses an ongoing threat to the lives, culture, and personal freedoms of people living in these Georgian territories.

We regret that even now, Russia has not yet implemented all elements of the EU-mediated 2008 six-point ceasefire agreement, including the return of its forces to pre-conflict positions.   We support the Geneva International Discussions, which hold the potential to improve security, reduce the likelihood of further conflict, and address humanitarian needs.

We are pleased that the Ergneti Incident Prevention and Response Mechanism (IPRM) continues to meet and engage on practical measures, such as steps to address medical and economic hardships resulting from the pandemic.  We hope the Gali IPRM will resume meetings soon.

We should seek opportunities to increase OSCE’s role in helping resolve this conflict, such as facilitating the work of the IPRMs, facilitating the safe, voluntary return of internally displaced persons, and through the active engagement of the OSCE Special Representative for the South Caucasus.  There is more we could so.  For instance, establishing a robust OSCE presence with access to all the internationally recognized territory of Georgia, including South Ossetia and Abkhazia, and with activities in all three dimensions of security, would be a source of transparency, stability, and conciliation.

The United States supports the sovereignty and territorial integrity of the Republic of Moldova.  On that basis, we support the 5+2 negotiations with the ultimate goal of reaching a comprehensive, peaceful and sustainable settlement of the Transnistrian conflict based on the sovereignty and territorial integrity of the Republic of Moldova within its internationally recognized borders with a special status for Transnistrian that fully guarantees the human, political, economic and social rights of its population.  Unfortunately, the progress achieved in the 5+2 settlement process in recent years has stalled.    We call on the sides to recommit to full implementation of the “Package of Eight” and other confidence-building measures, and to lay the groundwork to allow the process to move to discussion of core political and security issues in the third basket of the agreed 5+2 agenda.

In addition to facilitating the 5+2 negotiations, we believe there is more the OSCE can do to bring about progress on the ground.  This includes serving as a venue for building bridges between populations and identifying sources of tension and working to defuse them.  The OSCE Mission in Moldova may also be able to do more to assist the parties in implementing existing political and economic commitments, while seeking opportunities for progress on more difficult political-military challenges.

The presence of Russian troops and munitions on Moldovan territory without the consent of the government of Moldova remains a serious impediment to peaceful resolution of the conflict.  Russia has failed to implement fully its 1999 Istanbul commitments to withdraw its forces and munitions from Moldova.  Any movement of Russian forces or munitions in the sovereign state of Moldova is a matter of security interest to the 57 OSCE participating States. Ultimately, the destruction and removal of ammunition and armaments at Cobasna should occur under the aegis of the OSCE, and with international observation.

These protracted conflicts have persisted for too long, and, as we have seen, continue to present the potential to escalate and flare up.  The parties to these conflicts should take urgent steps towards their peaceful resolution, with the main purpose of improving the security and the daily lives of conflict-affected populations.  But we are all impacted by these conflicts in one way or another, and it is contingent upon us, as a community, to help the parties to the conflicts bring about peace.  The United States looks forward to contributing to the resolution of the protracted conflicts as we prepare for the Ministerial Council this December.