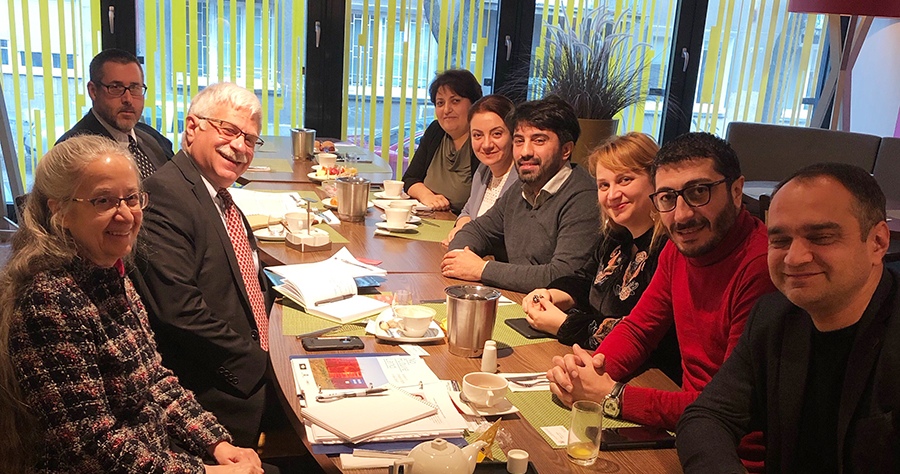 Assistant Secretary of State for Democracy, Human Rights and Labor Destro Meets in Solidarity with Civil Society in advance of OSCE Ministerial

U.S. Assistant Secretary Robert A. Destro met with civil society activists from Europe and Central Asia who had gathered in Bratislava during the 2019 Ministerial Council Meeting of the Organization for Security and Cooperation in Europe (OSCE).  The activists were participants and leaders of the parallel civil society conference convened by the Civic Solidarity Platform, a network of non-governmental organizations from the OSCE region. Assistant Secretary Destro voiced solidarity with the activists, emphasizing that: “Respect for human rights within states is essential to lasting security among states.”

Human rights defenders shared their priority concerns in Azerbaijan, Belarus, Kyrgyzstan, Russia, Tajikistan, and Turkmenistan.  Assistant Secretary Destro also heard from activists about systematic abuses in Russia-occupied Crimea.  He expressed U.S.-support for Ukraine’s sovereignty and territorial integrity within its internationally recognized borders and for President Zelenskyy’s domestic reform efforts.  NGOs from Armenia and Georgia offered their views on needed next steps to advance reform processes in each of their countries.

Assistant Secretary Destro assured the human rights defenders that: “The United States stands in defense of civil society and we reject undue restrictions on civil society participation in the OSCE.”

“In recent years, we have seen the most concerted effort to limit the exercise of human rights and fundamental freedoms in the OSCE region since the end of the Cold War,” he continued. “Civil society activists are harassed, threatened, and assaulted – even murdered — with impunity.”

“When Russia and other authoritarian countries blatantly breach their international human rights obligations and attempt to weaken OSCE’s Human Dimension, they are attacking the foundations of international security,” Assistant Secretary Destro concluded.