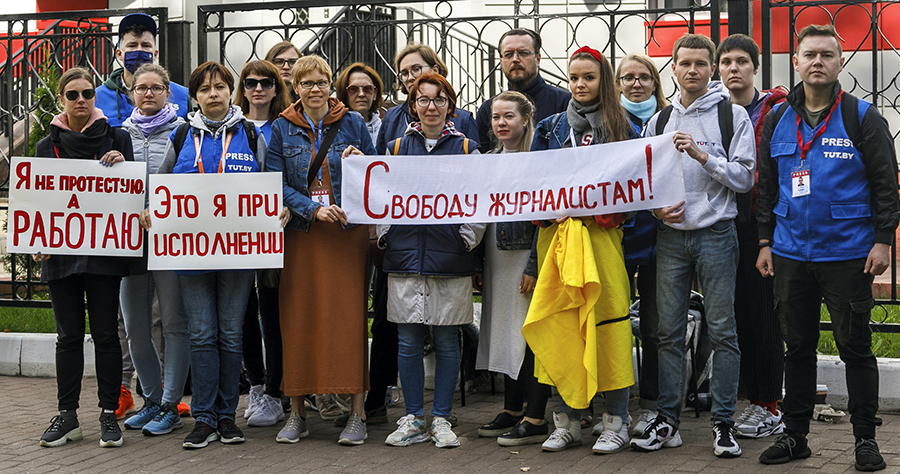 Journalists of Belarusian TUT.BY media outlet hold banners reading "I don't protest but work", "This is me at work", "Freedom for journalists!", from left to right, as they stand in front of police station in Minsk, Belarus, Wednesday, Sept. 2, 2020. (photo: Tut.By via AP)

Recalling the joint project and declaration that the United States and Belarus offered at the last Ministerial, I can assure the members of the goodwill of the United States towards Belarus as they go through this challenge in their country that they are facing now after the elections that were just held.  But the United States cannot condone the repression that we’re seeing of the freedom of the media, which, of course, goes to the development of democratic processes in Belarus, which are now underway.

Since the August 9th presidential elections, the government of Belarus has suppressed freedom of expression online and offline, including media freedom, in violation of its international obligations and OSCE commitments.  Belarus remains a member of the OSCE and committed to the OSCE commitments and values.  It has done so to prevent the Belarusian public, and the wider world, from gaining a full picture of the brutal repression taking place against Belarusian civil society.  We call upon the Belarusian government to cease detaining and abusing peaceful protesters and journalists, revoking journalists’ accreditation, blocking independent media and opposition websites, and blocking internet access.

In an effort to stifle independent reporting on the continued protests following the fraudulent August 9th presidential election, Belarusian authorities have resorted to mass arrests of journalists.  Just last week, reports surfaced that over 50 journalists were arrested in a single night of protests.

Those reporters were representatives of independent Belarusian and international media.  The detentions rightly sparked an international outcry, with the United States, EU, and several participating States calling on Belarus to immediately release those unjustly detained.  Additionally, independent observers such as the Committee to Protect Journalists reported many journalists have been brutalized while detained, with some suffering serious injuries.  These actions by the Belarusian government are clearly designed to intimidate and deter independent reporting.

Correspondents from the BBC, AP, Deutsche Welle, AFP, Reuters, and Radio Free Europe/Radio Liberty are just some of the reporters who were detained and stripped of their accreditation.  In addition, two Moscow-based Associated Press journalists were deported to Russia this past weekend.  Belarus is responsible for meeting its international obligations to respect freedom of expression and its OSCE commitments on treatment of journalists and must allow these and all other correspondents to report.

Immediately after announcing election results and on several other occasions since then, Belarusian authorities cut off access to the internet, attempting to deprive their people of the freedom to seek and receive information, and to hinder their ability to peacefully assemble, and as I have previously said in the modern world this will be fruitless.

Cognizant of the fact that the internet has been used to organize and promote protests, the Belarusian authorities also disrupted social media in an attempt to quash legitimate dissent.  These deliberate internet blackouts, disruptions of access to social media, and blockages of independent media and opposition websites do a grave disservice to the Belarusian people, and, in the end, will not work. We call on Belarus authorities to cease such tactics.

I would also like to reaffirm the call made here last week by Deputy Secretary of State Biegun for the immediate release of the American citizen Vitali Shkliarov, who still is being unjustly detained.  The United States views this matter with the greatest seriousness and calls upon Belarus to release this American citizen now, who is reportedly suffering abuse at the hands of Belarusian authorities.

The United States condemns the campaign of brutality and intimidation carried out by Belarusian authorities against peaceful protestors and journalists.  We also condemn their efforts to block internet service as well as independent media and opposition websites, and to disrupt access to social media.  We call on the government to immediately end the violence against the Belarusian people, release all those unjustly detained, and account for those reported missing.  The people of Belarus must be allowed to choose their own leaders through a truly free and fair election under independent observation.

I remind the delegates here today of our support for the initiative of the OSCE Troika to go to Minsk and to serve as mediators at this time of crisis.  I recall the eloquent statements made by the Chairperson in Office, Prime Minister Rama.  This is a historic moment for Belarus.  This is a historic opportunity for Belarus.  And this liberated country can have an inevitable path to democracy, and the United States supports these efforts and the efforts of the OSCE to play its constructive role.