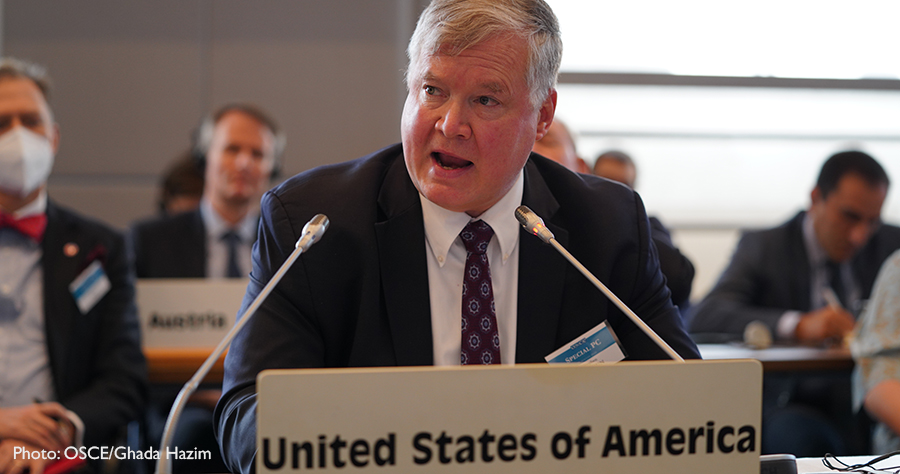 Thank you, Mr. Chairman, for calling this important meeting today. And it is an honor to be here with all of you.

Earlier this week, I had the privilege of meeting in Vilnius with Belarusian opposition candidate Sviatlana Tsikhanouskaya.  I was inspired by her courage and resolve to advocate for the Belarusian people in their peaceful demands to determine their own government and their own future.  We spoke for nearly two hours, during which she asked that my government respect Belarusian sovereignty.  I assured her that we will, as we expect every other government here today to do as well.

What is clear to the world is that the August 9 election in Belarus was fraudulent.

In the period prior to the election, Belarusian authorities carried out an orchestrated campaign of intimidation and harassment against opposition candidates, civil society activists, and independent journalists, and detained hundreds participating in peaceful demonstrations.  Candidate registration was severely flawed as restrictive measures were put in place to prevent potential candidates from fulfilling registration procedures.  Leading opposition candidates were arrested prior to election day and remain in detention to this day.

On election day, there were convincing reports of serious irregularities with ballot counting and reporting of election results, as well as restrictive measures prohibiting local independent observers at polling stations.   And unfortunately, because of the scale of this fraud the Belarusian people will never know the real outcome of their election.

The United States strongly condemns the post-election brutality carried out by Belarusian authorities against peaceful protesters and journalists, including the mass detention of nearly 7,000 Belarusian citizens, as well as ongoing efforts to block internet service and use security forces to intimidate those engaged in peaceful  protest.  This past week we have seen reports of further politically motivated detentions.

But this need not – and should not – be the final word. All of us admire the courage of the Belarusian people to continue their peaceful protests in the face of these intimidating actions.  Disparate elements of Belarusian society have come together to demand that their voices be heard for the future of their country.  The United States firmly supports the right of the Belarusian people to demand that their government adhere to the principles that the OSCE stands for:  free and fair elections and the protection of human rights. Every OSCE participating State committed to these principles in the Helsinki Accords and in the Final Act.

During the past week, I have spoken with many of you and your governments and listened to your perspectives and ideas about how we can collectively support the people of Belarus in their aspirations for their nation.  To do this, two critical elements must take place:

-First, there must be an immediate end to violence against the Belarusian people and the release of all who are unjustly detained.

-Second, the people of Belarus must be provided the self-determination to choose their own leaders through a truly free and fair election under independent observation.

Mr. Chairman, the events that have played out in Belarus have been plain to see for all of us.  Earlier this week, in Moscow, I had deep and substantive discussions with my Russian counterparts regarding events in Belarus. It is clear to me – and I hope it is clear to all – that  this is not a contest between east and west, and certainly not a contest between Russia and the United States; Mr. Chairman, this is a battle between a ruler and his own people.  The United States does not seek to control or decide the destiny of the Belarusian people.  That is for them and them alone to determine.  But, if we in this body do not stand with them, we do a discredit to all for which the OSCE stands.

What has become clear through my consultations in European capitals is that we need to move expeditiously to avoid violence, intimidation, and harm to the people of Belarus.  The United States has expressed our willingness to support the Chair-in-Office and the Troika as a means to facilitate dialogue within Belarus.

As I close, I also want to reaffirm the call – again – for the release of all those unjustly detained.  Among them is an American, an American citizen named Vitali Shkliarov.  Mr. Shkliarov traveled to Belarus in July with his 8-year-old son to visit his mother and to celebrate his birthday with her.  He was grabbed off the street, thrown in the back of a van, and driven 300 kilometers to a detention center.  Despite his incarceration, he has bravely refused to admit to crimes that he did not commit, and so he remains in jail.  Let me be clear, the President of the United States and the Secretary of State have no higher priority than the protection of American citizens falsely accused and held prisoner for crimes they did not commit.  We call upon Belarusian authorities to promptly release Vitali and all those who are unjustly detained.

The United States stands with Vitali Shkliarov, as we stand with all those who remain detained and unaccounted for, all those who have been killed, and all those who continue to march on the streets of Belarus peacefully demanding their right to determine their own future. To them I say, you inspire us, and we will not forget you.