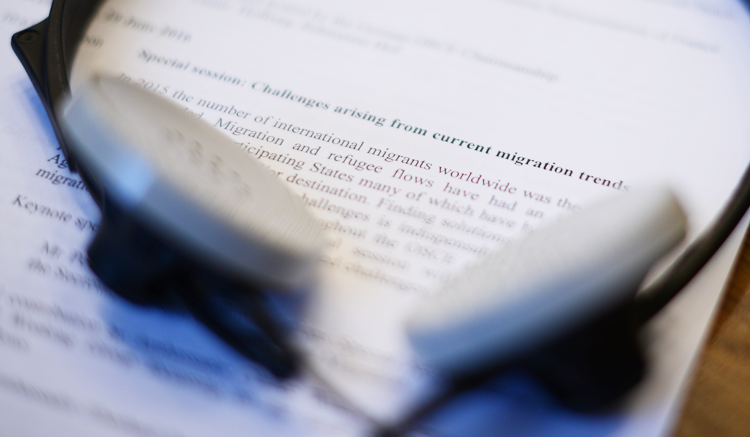 Photo from the agenda of the 2016 OSCE Annual Security Review Conference. (USOSCE/Colin Peters)

First of all, I wanted to join with others to both condemn in the strongest possible terms the terrorist attack yesterday in Istanbul, and to express our deepest condolences to the families and loved ones of those killed. We hope that those who were injured will have a speedy recovery. We remain steadfast in our support for Turkey, along with all our friends and allies around the world, as we continue to confront the threat of terrorism.

The United States views efforts to address the global refugee crisis and the challenges of migration in the 21st century as a top foreign policy priority for all of us. As we sit here today, more people are displaced by rising violence, brutal conflicts, insecurity, and persecution than at any time since World War II. Record numbers of innocent people have been forced to flee their homes and their countries, challenging the world to find better ways to protect them. The conflict in Syria alone has displaced more than 11 million people – half of that nation’s pre-war population. According to the UN High Commissioner for Refugees, more than 65 million people worldwide have been driven from their homes and are now refugees, internally displaced, or seeking asylum – an increase of five million in just the past year. Sadly, over half of these 65 million are children. The scale of human suffering resulting from these crises is almost unimaginable. As President Obama said this month when marking World Refugee Day, “the need for the world to respond is beyond question.”

As a global community, our first and foremost response should be to focus on saving lives, providing timely humanitarian assistance, and ensuring that human rights of all migrants and refugees are respected. Promoting orderly and humane migration policies, and ensuring that the proper screening and registration procedures are in place to facilitate appropriate assistance and provide protection to those in need, are essential components of our collective response.

However, we must also recognize that the crisis presents serious challenges to the stability and security of individual countries and regions, including those in the OSCE region. At the same time, what became clear last year was that neither individual countries nor the international humanitarian architecture were fully prepared to address global migration and displacement on this scale. We have seen the nations of Europe, with highly developed economies and a population of 500 million, struggle with the challenges of absorbing the more than one million migrants and refugees who arrived in 2015. For those countries hosting large refugee populations, including some OSCE participating States, the associated challenges in addressing the needs of those people can cause financial difficulties, ethnic and communal tensions, environmental impacts, and pressure on institutions. Turkey, in particular, is making extraordinary sacrifices by hosting three million refugees and continuing to welcome more.

Within the OSCE region, many migrants and refugees have been exploited by criminal networks operating migrant smuggling, trafficking in persons, including children, arms and drug trafficking, and other illicit operations, as our speakers have noted. EUROPOL estimates that these illegal activities generated as much as €6 billion in revenue last year in OSCE participating states, as some of the world’s most desperate people were pushed into the arms of some of the world’s most unscrupulous criminals. In addressing the crisis, we must include responses related to the “harder aspects” of security, including law enforcement, border security and management, and measures to address human trafficking. If not, we will face a growing threat from transnational organized crime to security and stability in the OSCE region. In doing so, however, we must continually remind ourselves of the need to maintain balance in our approach, as our first concern must be on saving lives, providing humanitarian assistance, and ensuring that human rights are respected.

In response to the crisis, our objective is to make sure that the policies and systems are in place to allow the United States, other OSCE participating States, and the global community to manage the displacement we face, alleviate the associated human suffering, and ensure that criminal actors do not exploit this trend further. It is with this goal in mind that the United States provides more humanitarian assistance to refugees and others in need than any other nation and maintains the world’s largest refugee resettlement program.

Although many refer to the current wave of migrants and refugees as a crisis, it has become clear that, for a number of reasons, the trend of migration and displacement will continue as a long-term challenge. Thus, we are encouraged that, given the humanitarian urgency of the crisis, its impact on OSCE participating States, and this Organization’s capacity to respond, the OSCE is actively working to develop a coordinated, effective, and sustained response. We fully support this effort, led by the Permanent Representative of Switzerland Ambassador Claude Wild (V-ill-d), and agree with his assessment that the OSCE’s response should be part of a systematic, coordinated global effort that complements those of other organizations.

As a regional cooperative security organization, the OSCE is in a unique position to provide practical support to migrants and refugees, as well as to the specialized agencies that provide protection and security. In fact, most of the OSCE executive structures and field missions are already active, within their mandates, on the issue of migration and refugees. For example, as we have already seen in Serbia and Skopje, OSCE field missions have demonstrated how they can support host countries in responding to the crisis. Utilizing their relationships with host governments, civil society, law enforcement, and community leaders, OSCE field missions have strengthened cross border cooperation, taken practical steps to reduce exploitation, and worked to reduce intolerance. More broadly, the OSCE also has important convening power to bring countries affected by the crisis together, enable more effective cooperation, and facilitate the sharing of information to assist law enforcement. As Ambassador Wild said, the OSCE has the ability to help us break through some of the silos that we confront. The United States looks forward to the discussion of recommendations that will be made at the Special Permanent Council meeting on Migration July 20.

Mr. Chair, responding to this unprecedented challenge requires all of us to do more. That is why, on September 20, at the UN General Assembly in New York, President Obama will host a Leaders’ Summit on Refugees, asking nations to make concrete commitments toward expanding the humanitarian safety net and creating more long-term, durable opportunities for refugees. In advance of that Summit, the United States is urging other governments to contribute more funding for humanitarian aid operations, to grant more refugees the ability to work lawfully and attend school, and to provide more resettlement opportunities for refugees who cannot safely go home or remain where they are. We are urging our non-governmental partners, including the private sector, to do more as well.

The world today faces enormous challenges, as millions of refugees and other displaced persons seek the dignity and safety that can only be achieved through an unprecedented global response. We believe that the OSCE has an important role to play in this global response, and we encourage fellow participating States to support the OSCE’s efforts in this area. We also call on participating States, and the entire international community, to demonstrate their commitment to this response by increasing humanitarian funding and creating opportunities for refugees and other displaced persons.

Only by working together, can we address this crisis in an effective, safe, and humane way that also strengthens our security and stability.

As prepared for delivery by Deputy Assistant Secretary for European Affairs Kathleen A. Kavalec, at the 2016 OSCE Annual Security Review Conference, Vienna