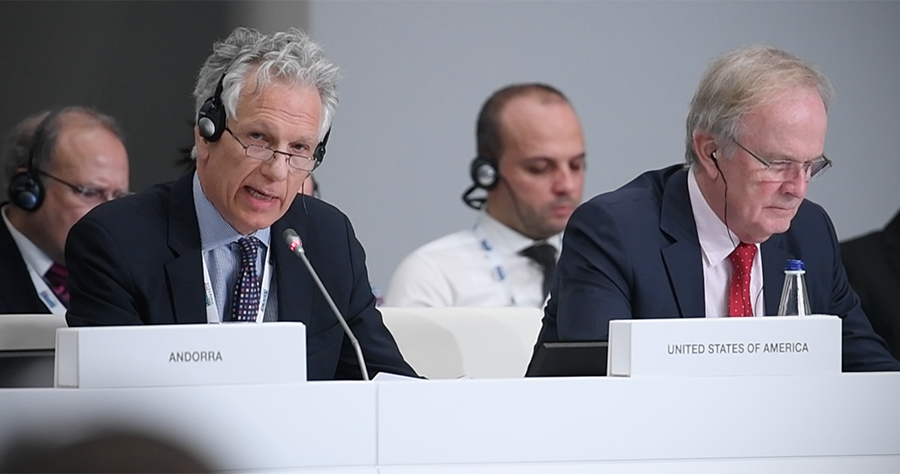 Statement at the Closing Plenary Session of the 2018 OSCE Ministerial Council
As prepared for delivery by Deputy Assistant Secretary of State Bruce Turner
Milan, Italy
December 7, 2018

Yesterday, U.S. Head of Delegation Wess Mitchell paid tribute to the late President George H. W. Bush and his support of the OSCE. At the Paris Summit in 1990, President Bush offered timeless advice – that participating States must put OSCE principles into practice.

Twenty-eight years later, the OSCE and the principles at its core remain vital to Europe’s security architecture. When a state contravenes these principles, as Russia repeatedly does in Ukraine – most recently in the Kerch Strait and the Sea of Azov – the results are horrific.

Moscow’s ongoing aggression in Crimea and eastern Ukraine precipitated and perpetuates the worst security and humanitarian crisis in Europe since the 1990s. But when Russia sent its “little green men” into Crimea and the Donbas in 2014, the OSCE responded. The United States strongly supported the launch of the largest mission the organization has ever fielded: the Special Monitoring Mission in Ukraine. The OSCE also established the conflict settlement mechanism, the Trilateral Contact Group, but Russia and its proxies consistently obstruct progress there.

There will be no progress in Ukraine until Russia changes its behavior. The onus lies squarely on Moscow, and the United States will not support agreements for the sake of agreements that sacrifice or undercut the principles President Bush and the leaders of other participating States enshrined in Paris. We value Italy’s effort in 2018 to advance and move forward in the same spirit we all displayed in 1990.

Russia’s disregard for its neighbors’ frontiers and the human rights of those within its borders is the chief cause of mistrust and insecurity in this region. Trust is built through deeds, not empty dialogue. With this in mind, Assistant Secretary Mitchell yesterday underscored our commitment to Vienna Document modernization. The concrete proposals endorsed by almost every participating State would help rebuild military transparency within the OSCE region. We regret that participating States were not able to reach consensus on even modest steps to update the Vienna Document.

We commend the Italian Chair-in-Office and the Swedish Chair of the Forum for Security Cooperation for their efforts on behalf of Vienna Document modernization. We must redouble our efforts next year. This should include continuing our frank and open exchange of views on key security issues and threat perceptions within the Structured Dialogue on Security Issues.

We regret that again it was not possible to reach consensus on a regional statement on the Russia-Georgia conflict. Ten years have passed since 2008, and still Russia has not fulfilled basic cease-fire commitments. In Paris nearly 30 years ago, our leaders expressed their conviction that “an essential complement to the duty of states to refrain from the threat or use of force is the peaceful settlement of disputes…” Russia’s political and military actions in the South Ossetia and Abkhazia regions of Georgia have been directed at the opposite, deliberately intended to make division and suspicion permanent facts on the ground. The United States was pleased to join the Friends of Georgia in expressing unwavering support for Georgia’s sovereignty and territorial integrity within its internationally recognized borders.

The United States continues to value this organization, its comprehensive approach to security, and its principles and institutions. We strongly support the safety of journalists and freedom of expression, and we welcome the adoption of a Ministerial Council decision on this topic. We lament, however, that certain States refused to join consensus on a number of key decisions that would have further strengthened the OSCE to meet today’s challenges.

We are proud that 16 participating States responded to credible reports of the Russian Federation’s utter failure to uphold human rights in its Republic of Chechnya by invoking the OSCE’s Moscow Mechanism. The human dimension remains critical to our shared security, and we will continue to work toward meaningful, concrete actions in this dimension in 2019.

Allow me to close by looking back four decades. A short time after the Helsinki Final Act was signed, renowned physicist and human rights defender Dr. Andrei Sakharov stated in his Nobel Peace Prize lecture: “Peace, progress, human rights – these three goals are insolubly linked to one another: it is impossible to achieve one of these goals if the other two are ignored.” The United States remains resolved to work within the OSCE to advance all of these goals for the sake of our common security.