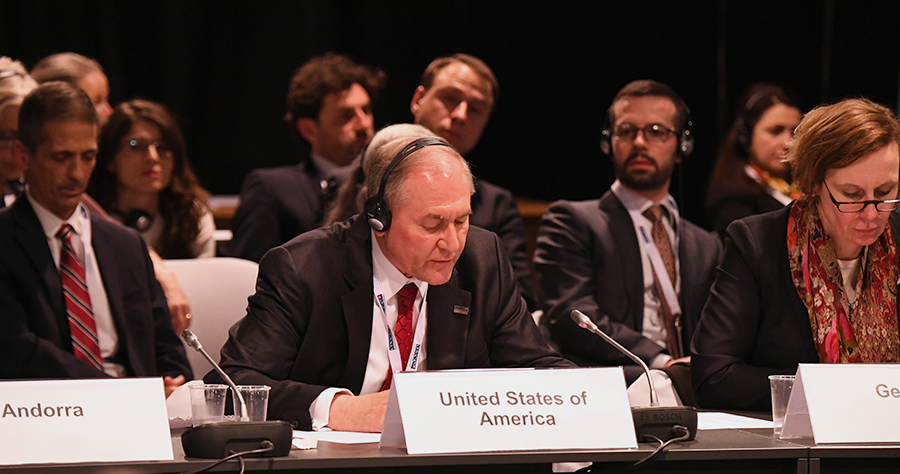 I ask that you extend to Foreign Minister Lajčák our gratitude—I know I speak for many—in hosting this event. I appreciate Slovakia’s hospitality as host of this Ministerial Council and your delegation’s efforts to ensure that this meeting was a success. We also recognize the tireless work over the past year of Rado Bohač — Slovakia’s Permanent Representative to the OSCE. We fully support Albania as our next chair-in-office and welcome Sweden’s and Poland’s commitments to take on this serious responsibility in the future.

President Trump asked me to make clear the strong U.S. commitment to defending and promoting the values and principles of the Helsinki Final Act and the OSCE Paris Charter. The United States understands the importance of the OSCE and the role that it plays in strengthening regional stability, advancing economic and environmental development, championing human rights, and promoting tolerance. That is why we have chosen to be the largest contributor both in budgets and personnel. We regret that a consensus could not be reached on a decision to prevent and combat trafficking in human beings despite all of our best efforts. We appreciate the strong support of our co-sponsors, Belarus and the Slovak chairmanship.

We continue to have serious concerns about several participating States’ failure to implement their OSCE commitments. But let’s be clear: participating States do not share equal responsibility for the lack of progress in fulfilling the promise of the Helsinki Final Act and the Paris Charter. Rather, one State—Russia—bears primary responsibility. We see this in Russia’s ongoing aggression in Ukraine, the occupation of parts of Georgia, its continued military presence in both Georgia and Moldova, its human rights violations and abuses at home and abroad, and its increasingly sophisticated use of hybrid methods to undermine security and democratic systems in all three dimensions.

My colleagues and I had productive meetings at this Ministerial Council with civil society activists and NGO representatives. Their expertise strengthens the work that we do, and we must resist efforts that unduly restrict civil society participation in OSCE events.

My government welcomes agreement of all 57 on a Ministerial Council statement regarding the 5+2 talks on settlement of the Transnistrian conflict. We recall as well the need for fulfillment of OSCE Summit commitments regarding the withdrawal of Russian military forces from Moldova.

The United States was pleased to join the Friends of Georgia in expressing unwavering support for Georgia’s sovereignty and territorial integrity within its internationally recognized borders. Unfortunately, it was not possible to reach consensus on a statement on the Russia-Georgia conflict. We would welcome discussion of opportunities for an increased OSCE role in bringing about a peaceful solution within the proper rules.

We also regret Russia blocking efforts to modernize the Vienna Document, as was previously stated in this meeting. For many years after the Helsinki Final Act was adopted, Russia was a staunch supporter of military transparency measures. The regrettable change in Russia’s direction goes beyond what could be justified by any legitimate security concerns. Even this very night, when a consensus document had been negotiated to declare our solidarity with our Asian partners, Russia offered last minute changes that they knew would block adoption of that consensus declaration.

I look forward to the day that Russia ceases its obstructionism and allows this organization to achieve its full potential, and joins the overwhelming number of participating States in efforts to ensure that our shared security and a peaceful future for the OSCE region becomes a reality.