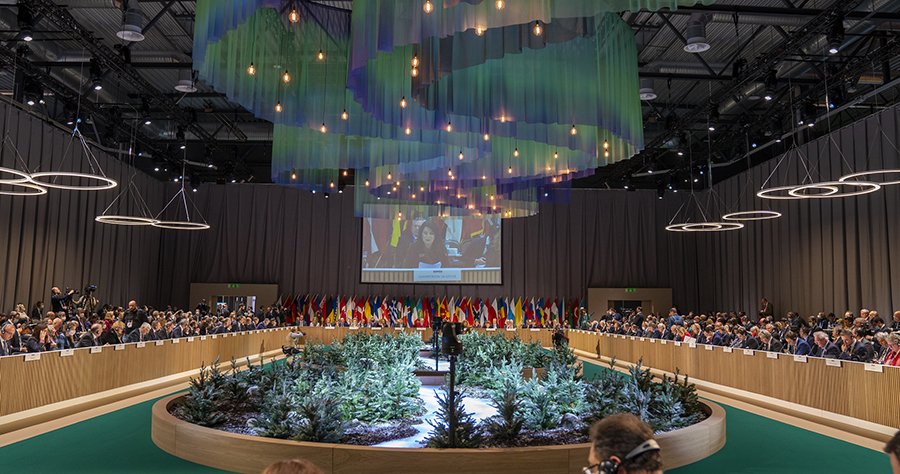 As prepared for delivery by Ambassador Michael Carpenter
to the Ministerial Council, Stockholm, Sweden
December 3, 2021

Thank you, Mr. Chairman.  We commend the Swedish Chairpersonship for its dedication in leading this Organization under the able stewardship of Chair in Office Ann Linde and Ambassador Ulrike Funered.

The United States looks forward to working with Poland in 2022 as we seek to address some of the most significant challenges to our region.  Indeed, as Secretary Blinken and so many other Ministers underscored, we face challenges to the foundational principles of this organization.

The situation in the South Caucasus region, including tensions between Armenia and Azerbaijan, remains fragile, and we urge the sides to work with the Minsk Group Co-Chairs and continue to engage in direct dialogue aimed at contributing to security, stability and prosperity in the region.

The United States welcomes the 5+2 statement on settlement of the Transnistrian conflict.  In addition to the issues addressed in it, we recall the need for fulfillment of OSCE Summit commitments regarding withdrawal of Russian military forces from Moldova.

We regret that participating States did not reach consensus on a Georgia regional statement and express our unwavering support for Georgia’s sovereignty and territorial integrity within its internationally recognized borders.

In Belarus, we remain gravely concerned by the Lukashenka regime’s unprecedented repressive actions to silence dissent and crack down on civil society and independent media.  That is why we joined others in invoking the Vienna Mechanism earlier this year.

In Ukraine, Russia has instigated an eight-year conflict and massive humanitarian crisis, forcibly seized and occupied Ukraine’s sovereign territory in Crimea, and continues to commit serious abuses in areas under its control.  Let me be crystal clear: “Ukraine is in no way posing a threat to Russia or seeking a confrontation that would justify a Russian military intervention.  The only threat is that of renewed Russian aggression toward Ukraine… It’s now on Russia to de-escalate the current tensions by reversing the recent troop buildup.”  We are deeply concerned by the threats faced daily by the SMM and regret Russia’s refusal to extend the mandate of the Border Observation Mission.  We do not, nor will we ever, recognize Russia’s purported annexation of Crimea.  Crimea-related sanctions will remain in place until Russia returns full control of the peninsula and Minsk-related sanctions will remain in place until Russia fully implements its Minsk commitments.

We regret Russia prevented the 2021 Human Dimension Implementation Meeting from taking place.  As Secretary Blinken said, it is essential that HDIM take place in 2022.  HDIM constitutes a unique and indispensable function of the OSCE, whereby all participating States are held accountable to each other and by civil society for living up to Human Dimension commitments.

Actions to block or otherwise impede progress on OSCE objectives and core functions adversely affect the comprehensive security which we all committed to achieve.

We were disappointed that none of the FSC texts achieved consensus.  However, we are pleased that 47 participating States joined together this year in affirming support for modernizing the Vienna Document and that many participating States supported the strong statements on Small Arms and Light Weapons and on the centrality of the Women, Peace, and Security agenda.

We need to redouble our efforts in the second dimension next year, not only on climate but on the economic side of the ledger, and in recognition of the linkages between dimensions.  Corruption undermines democratic development and faith in institutions; the linkages between corruption and national security are real.

In a year overshadowed by a pandemic, a declaration by this Ministerial Council on women’s economic empowerment, underscoring the disproportionate impacts of COVID-19 on women in the OSCE region would have been appropriate.  We regret that we could not reach consensus on such an important issue as Preventing and Combating Trafficking in Human Beings.  We hope Poland will build upon the substance of the draft from our negotiations.

We thank the CiO and the Norwegian Human Dimension Committee chair for their hard work this year on freedom of expression and other human rights and fundamental freedoms.  These are under assault in many countries in the region and must be a focus in 2022.

I welcome the decision reached here on climate change – the first in seven years – and look forward to further work on building climate resilience in 2022.

The United States continues to place great value on this Organization, its principles and commitments, and its independent institutions.  You can be assured of the United States’ continued dedication to the OSCE and the goal of building a peaceful and prosperous region, where all people are treated with dignity and are free to exercise their human rights.

Mr. Chair, we request that this statement be attached to the decision and the journal of the day.