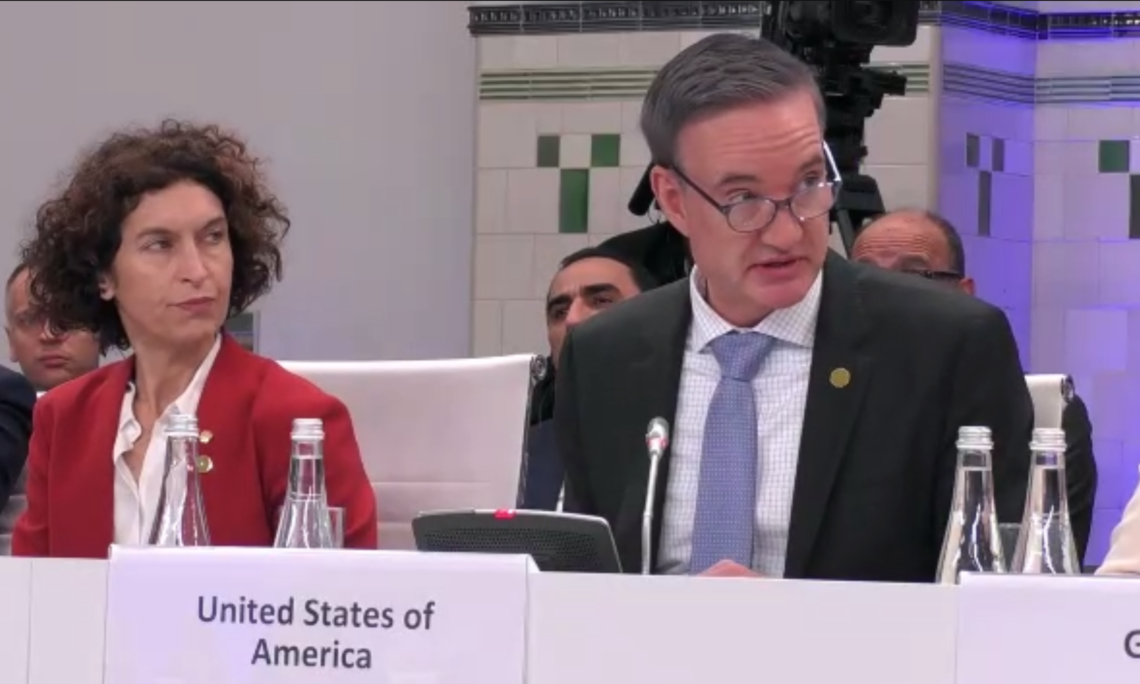 Russia’s undermining of our collective security is visible not just in Ukraine but in other areas of the OSCE region as well.

We commend the Polish Chairpersonship for its leadership and dedication to this Organization in extremely challenging times, thanks to the able stewardship of Chair-in-Office Foreign Minister Zbigniew Rau and you, Ambassador Halacinski, dear Adam.  Your focus on defending the foundational principles of the OSCE has been essential to the Organization’s survival and its continuing ability to function as an effective platform to uphold our shared values.  You have our full support and enduring thanks for your efforts.

The United States looks forward to working with North Macedonia in 2023 as we continue to address the unprecedented challenges to security and prosperity in our region.  In Ukraine, Russia continues to wage a war of aggression that is unprecedented in the history of this Organization in its size and impact.  The increasingly dire cost in terms of human life and economic damage continues to shock our senses while the unconscionable violations of international humanitarian law and barbarous atrocities committed by Russia’s forces have no place in this world.  Moreover, the overlapping humanitarian, energy, and food crises Russia’s war has caused are imposing widespread suffering on vulnerable people around the world while complicating international efforts to address vital issues like climate change.  Nowhere is the risk posed to us all more clearly visible than in the breathtakingly reckless actions taken by Russia in and around Ukraine’s civil nuclear facilities.  Moscow’s apparent contempt for potential nuclear catastrophe should serve as a stark reminder to us all that nobody is immune from the consequences of Putin’s disastrous war.  All of this is due to the Kremlin’s drive to achieve its neo-imperialist ambitions and unilaterally redraw the borders of its neighbors at any cost.

Russia’s undermining of our collective security is visible not just in Ukraine but in other areas of the OSCE region as well.  For more than 30 years, Russia’s troops have remained on the territory of Moldova without the host country’s consent in violation of its sovereignty.  We urge Russia to fully withdraw its troops and ammunition in line with the commitments it made at the 1999 Istanbul Summit.  Russia’s invasion of Georgia in 2008 and its ongoing military presence on Georgian territory without Georgia’s consent violate Georgia’s sovereignty and territorial integrity and international law.  The United States offers our unwavering support for Georgia and stands with the Group of Friends of Georgia in pressing Russia to honor the terms of the 2008 ceasefire agreement.  The United States will also continue to work with Armenia and Azerbaijan bilaterally as well as together with the European Union, the OSCE, and other partners towards a comprehensive agreement that brings lasting peace to the region.

OSCE field operations and the three independent institutions are indeed the “crown jewels” of this Organization.  Through our field missions we deliver concrete, on the ground results – working closely with the host governments and civil society to assist participating States to achieve their commitments in all three dimensions of the OSCE and, by so doing, improve security in our region.  The Office for Democratic Institutions and Human Rights, Representative on Freedom of the Media, and High Commissioner on National Minorities, as well as the various Special Representatives, play integral roles in helping ALL participating States meet their Helsinki Final Act commitments.  Actions to block or otherwise impede progress on OSCE objectives and core functions – such as the mandated annual Human Dimension Implementation Meeting or field operations or approval of the Unified Budget – directly erode the comprehensive security which the Organization is intended to uphold.  We can and will overcome these hurdles.  We will work with the Chair and others who want to see the OSCE succeed to build creatively on ground-breaking initiatives, such as the Support Programme for Ukraine and the hugely successful Warsaw Human Dimension Conference.

More than ever – and precisely because of Russia’s aggression, war crimes, and human rights abuses in Ukraine – the United States places great value on this Organization, its principles and commitments, and its independent institutions.  You can be assured of the United States’ continued dedication to the OSCE and our shared goal of building a secure, peaceful, and prosperous region, where all people are treated with dignity and are free to exercise their human rights – and where those who seek to brutally impose their might in pursuit of neo-imperial ambitions, and their accomplices, are held to account.

Mr. Chair, we request that this statement be attached to the journal of this Ministerial Council.