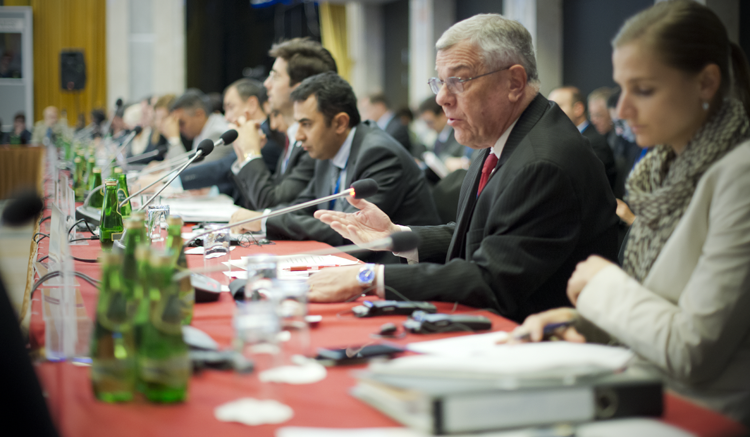 As the 2016 HDIM draws to a close, my delegation wishes to share some observations that will shape our approach to the OSCE Ministerial in Hamburg.

First: Helsinki Final Act Principles linking respect for human rights within states to lasting security among states could not be more relevant. These foundational principles are under siege and they must be defended.

Second: The breach of these principles has created a degree of insecurity and distrust in this region that is without precedent since the Balkan Wars of the early 1990s. We must always be ready for honest discussions and purposeful cooperation wherever improvements can be made. But diplomatic “balancing” and institutional adjustments — however creative and well meant — cannot restore security and trust. Security and trust come only from renewed fidelity to the Founding Principles.

Third: No matter how hard Russia tries to gain international legitimacy for its intervention in eastern Ukraine and its occupation of Crimea – and no matter how hard it tries to justify its military support for the separatist enclaves in Georgia — it will fail. The Donbas and Crimea remain parts of Ukraine. Abkhazia and South Ossetia remain parts of Georgia. Threat or use of force will not deter Ukraine, Georgia and Moldova from their sovereign decisions to deepen their integration with Europe.

Fourth, and this bears repeating, because we still hear this tired accusation from a number of participating States: When a fellow State, or a human rights defender, or an NGO, or a journalist criticizes the human rights record of a particular country, this does not constitute interference in internal affairs. As we all reaffirmed at Astana, Human Dimension commitments “are matters of direct and legitimate concern to all participating States and do not belong exclusively to the internal affairs of the state concerned.” No government secure in its democratic legitimacy would be frightened by efforts, whether domestic or international, to expose abuses. The record of my own government has been examined and sometimes criticized here by fellow States and civil society members.  This is to be expected.  We might not always agree with the criticism, but we take it seriously, and we try to respond in a serious way.

Indeed, my government is among only a handful represented here that has acknowledged domestic shortcomings and discussed how we are working to address them. As is our custom, my delegation will report later today on steps we took to fulfill the promises we made at last year’s HDIM, and are planning to take additional measures between now and the 2017 HDIM.

Fifth: The participation at HDIM of independent civil society members is essential to the quality and integrity of our discussions. Your contributions provide ground-truth, deepen our understanding, and help us find practical solutions to problems. You add a vital human element. I was particularly moved by the pleas on behalf of Crimean journalist Mykola Semena, who faces criminal charges for alleged “calls for undermining Russian territorial integrity via mass media.” He is in ill health and banned from leaving occupied Crimea. We urge the Russian occupation authorities to permit Semena to travel to Kyiv for medical treatment. And my delegation made a special point of reaching out to Azerbaijani journalist Khadija Ismayilova through the power of technology, since she was prevented from travelling here. These and other personal encounters put a human face on the disturbing trends we see in the region.

Sixth: Setbacks for democracy, human rights and the rule of law have worsened since the last HDIM. During the two weeks we have been deliberating, the leadership of the Republika Srpska held a referendum in direct contravention of a decision by the Constitutional Court of Bosnia-Herzegovina, undermining the rule of law and obstructing implementation of the Dayton Peace Accords. Officials in Hungary’s parliament reportedly attempted to launch security investigations into NGOs in retaliation for their criticism of the government’s anti-migrant campaign.

Russia’s Supreme Court upheld the ban on the Crimean Tatars’ self-governing body, the Mejlis. Reportedly, the occupation authorities have initiated a criminal case against lawyer Nicolay Polozov for his defense of unjustly targeted Crimean Tatars. We repeat: Russia has no authority over Crimea. Within its own territory, Russia added two more civil society organizations to the “foreign agents” list, bringing the total to 144. Meanwhile, the Russian Delegation persists in making the false claim that their country’s repressive “foreign agent” law is similar to the U.S. Foreign Agents Registration Act (FARA). It is not. Our law does not penalize those who disagree with our policies or practices, whether they happen to be NGOs or foreign governments. FARA is a public disclosure law. It does not restrict lobbying or advocacy in the United States, nor does it restrict receipt by NGOs of foreign funding. Unlike Russia, we only require that actual representatives of foreign governments register and disclose that they are acting as such.

The investigative journalist Grigoriy Pasko, with whom my delegation met last week here in Warsaw, was physically attacked in Barnaul, Russia. The NGOs and independent journalists who have enriched our HDIM discussions have the right to return to their countries. It should be respected without reprisal. Family members of Tajik activists, who made presentations in this very hall, were reportedly assaulted or threatened in Tajikistan. We also are concerned that Kyrgyz activists have received threats.

In an attempt to crowd-out authentic voices, GONGO after GONGO has taken the floor here. These GONGOs and the governments that hand them their talking points smear individuals peacefully exercising their rights as “violent extremists” or “terrorists.” We all recognize this ugly practice for what it is: a rationalization for repression.

Seventh: The choice between security and liberty is a false choice. Members of civil society need fundamental freedoms to organize themselves against the real violent extremists. Fundamental freedoms also are needed by the home-grown political movements that give young people hope that change can be won peacefully. To curb freedoms is to lower our defenses.

Eighth: Our political leaders bear a heavy responsibility to confront intolerance across our region. We must condemn and combat hate crimes against Roma, persons of African descent, Jews, Muslims and Christians, and others who are targeted, such as LGBTI individuals, persons with disabilities and migrants. Peace is threatened when the power of the state is used to stoke hatred. This continent has seen where unchecked hatred leads. It leads to Auschwitz and Babyn Yar.  All participating States must reject intolerance and discrimination in all their forms. And we should welcome civil society as our partner in this cause.

Ninth: Mounting pressure against civil society and independent media is accompanied by efforts to undermine the HDIM and weaken the OSCE’s independent bodies and field missions. My delegation opposes any shortening of the annual HDIM or any hollowing-out of HDIM agendas. We also oppose any weakening of OSCE institutions, of the integrity of their mandates, or of their budgets. We will work with other delegations and with the German and Austrian Chairmanships to ensure that fearless, determined, effective successors are chosen for the High Commissioner on National Minorities, the Representative on Freedom of the Media, and the Office for Democratic Institutions and Human Rights. Any participating State that holds these key positions hostage cannot claim to act in good faith.

Tenth, and finally: As we prepare for the Hamburg Ministerial, we need to focus our efforts on defending Helsinki Principles, implementing our shared commitments, and strengthening OSCE institutions. There is no other way to rebuild and sustain our common security. We urge Tajikistan and Kyrgyzstan to re-engage in the full range of OSCE activity. Your presence ensures that your point of view is heard. We also urge that Kosovo finally be allowed to take its rightful place at the table. The political resolve of governments and the contributions of civil society are needed to meet the compelling challenges of our region and the aspirations of all our people.

On behalf of my delegation, I thank Director Link and his outstanding ODIHR team for so masterfully organizing this premier event for human rights. We extend, once again, our deep gratitude to the people and government of Poland for hosting ODIHR and for so graciously receiving us at HDIM.