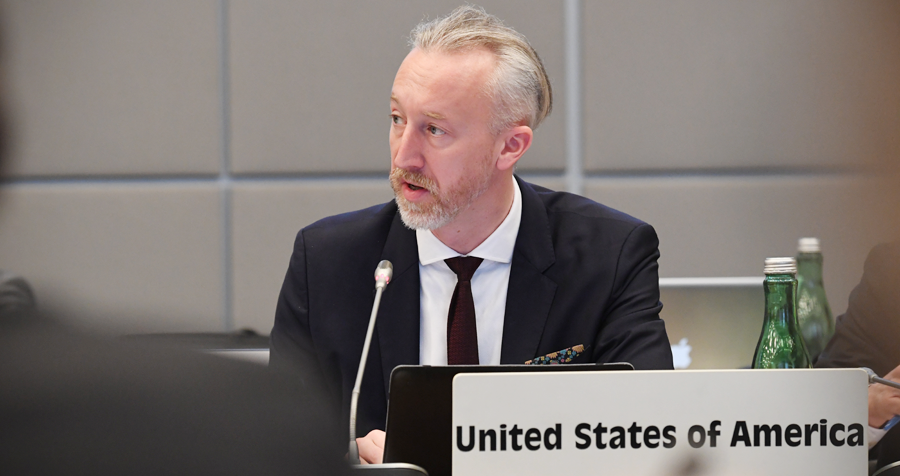 First of all, I would like to again thank Ambassador Azzoni, the Italian Chairmanship, and Ambassador Žugić and his team at the OSCE Economic and Environmental Activities Office for finding an innovative and timely theme for the 26th OSCE Economic and Environmental Forum Preparatory Meeting. Thank you, as well, for inviting relevant and informative presenters, including from the OSCE field offices, where Permanent Council deliberations are put into action.

This week’s preparatory meeting addressed important themes we hope will lead to more substantive conversations in the months ahead. The ideas of the digital economy as facilitating connectivity, innovation, competitiveness, good governance, anti-corruption, security, and sustainability could lead not just to more jobs or a sounder investment climate, but to broad socio-economic and political security and stability.

Ambassador Azzoni and Secretary General Greminger warned us yesterday that the OSCE as an organization has lagged behind in considering issues of technological advancement, our growth is slower when we do not engage in innovation, and criminals can use technology to threaten our prosperity and security. But, as Ambassador Žugić described, digitalization has changed the entire dynamic, offering entirely new ways to produce, commercialize, and consume products and services.

It is a lesson we learned well in the United States, where the digital economy has been driving our economic growth and national strength. The National Security Strategy released in December said the United States will prioritize emerging technologies critical to economic growth and security, specifying – as some presenters did – that “the field of artificial intelligence, in particular, is progressing rapidly.”

The digital economy presents the OSCE, as a security organization, with the challenge of balancing security and openness. Presenters spoke of a Fourth Industrial Revolution, with opportunities in trade, anti-corruption, citizen access to responsive governments, new jobs, an attractive investment climate, enhanced SME and national competitiveness, and environmental opportunities through technology. They also spoke of threats and unknowns posed by stealing intellectual property rights and personal information, cryptocurrencies upsetting financial markets, workers displaced by new technologies, and a digital divide.

Fundamental to success in this conversation is the rule of law, good governance, and supporting societies that produce the workers we need to fill next generation jobs. Interconnectivity is a threat if some participants refuse to respect the rules. It is an opportunity if users can trust that their rights and their data will be safe and protected by legislation and responsible institutions. As Hristo Hristov from Bulgaria’s Information Technology Directorate said, “sustainable development is ultimately an issue of governance.” Martin Baily from the European Commission further explained, “People will not invest unless you have a clear, predictable, rules-based system.” For prosperity to grow across the OSCE region, barriers should eventually fall, but this can only happen when the rule of law can reliably replace them. Unfortunately, we are not yet quite there.

In the meantime, we welcome the Italian Chairmanship’s effort to begin the effort of addressing this new world from a security perspective. By strengthening the rule of law, embracing innovation, and working to overcome digital divides, participating States and our citizens might enjoy the benefits from the digital economy while mitigating the risks. It is an effort we need to make.

Once again, the United States thanks the Italian Chairmanship and OSCE Office of the Coordinator for Economic and Environmental Activities for this preparatory forum. We look forward to actively participating in this conversation further, as we work to increase security and cooperation in the OSCE region through the Second Dimension.