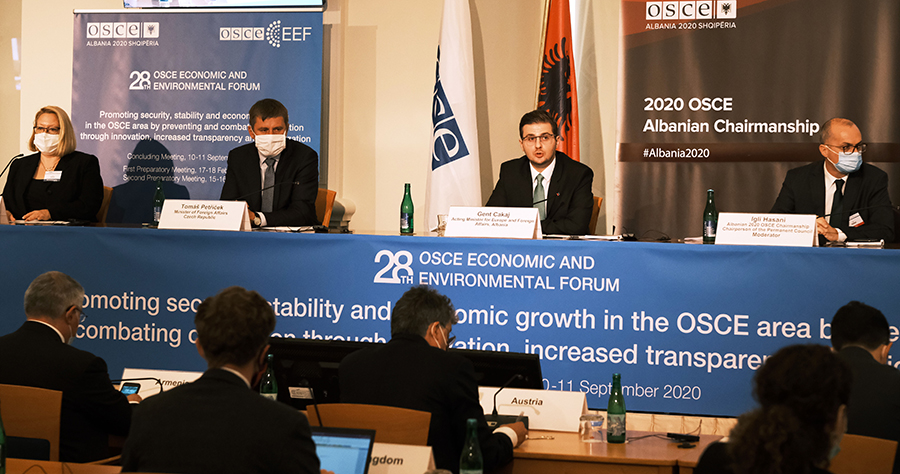 Thank you, Mr. Chairman, and thank you to the organizers and the speakers, for holding this forum despite the very real challenges posed by the ongoing global pandemic.  We appreciate the logistical complexities of organizing such a blended event and applaud your success!

Based on the First and Second Preparatory Meetings earlier this year, and the discussions here in Prague this week, the United States supports the focus on two areas long overdue for Ministerial Council decisions later this year: the sustainable use of natural resources and preventing and combating corruption.  Trafficking in natural resources, including wildlife trafficking, is a particular challenge that the OSCE is well placed to confront and it sits at the intersection of organized crime and corruption.  OSCE’s engagement will be critical for promoting the sustainable use of natural resources globally.  Many participating States are consumers of natural resources from elsewhere; an anti-trafficking decision by us would have a global impact.  We look forward to continued substantive discussions on these issues in the coming weeks, and note the many useful and thought-provoking contributions we have heard over these two days.

The nexus of corruption and organized crime, as highlighted six years ago by the Basel Ministerial Council Decision, remains a critical threat in parts of the OSCE region and demands our attention now more than ever.  This nexus threatens to hollow out democratic institutions, prevent citizens from having confidence in government officials and the rule of law, damage economic participation, and threaten security.  However, in the intervening years since Basel, new tools and technologies – such as digitalization – have become available to help prevent and combat corruption and organized crime.  It is both timely and necessary for OSCE to focus on the best ways to integrate those tools and technologies in comprehensive efforts against corrupt practices and organized crime.  Basel was a first step, and we hope we can collectively build on it this year.  But a narrow focus on digitalization will not get us here.  We need a decision that addresses the substance of the problem, as well as considering the tools to combat it.

Trust is the most effective tool in the anticorruption toolkit.  In particular, trust between citizens and their state to render society more resilient to crime and corruption; between private companies and sovereign states to spur investment and growth; and between sovereign states to strengthen regional stability and security.  You heard Under Secretary Krach, Ambassador Gilmore, and Minister Roth all underscore its centrality in their respective remarks yesterday.  Many of the laudable proposed solutions and pathways forward we heard about here rely on earning and building confidence:  creating it through concrete and transparent actions where it is missing; reinforcing it where it is weak; and entrenching it in new, accountable systems that may be created.  We do need to address the tools that fight corruption – investment screening and adherence to international standards in particular, including standards against trafficking – but those actions alone are not enough.

As many speakers have said, the OSCE is also overdue for an updated consensus decision on environmental protection.  The OSCE should consider how it can contribute to security in the OSCE area by supporting the sustainable use of natural resources – in particular, by combating trafficking in wildlife, timber, and precious metals, and by combating illegal, unreported, and unregulated fishing.  We know corruption feeds this illegal trade, which is exploited by organized criminal networks for profit and money laundering and which degrades the environment and undermines the resilience of democratic institutions.  Many of the criminals engaged in the trafficking of natural resources also traffic human beings, drugs, and arms. Clarifying the role of the OSCE and the commitment of participating States to fight these challenges with effective laws and implementation, and by supporting the work of other organizations, would be a tangible contribution to regional and global security.

The United States looks forward to continuing our engagement in the Second Dimension and working on these important issues with you.  We applaud and fully support the Chairmanship’s focus on them.  In closing, let me again express our sincere gratitude to the organizers of this week’s events for your tremendous work.