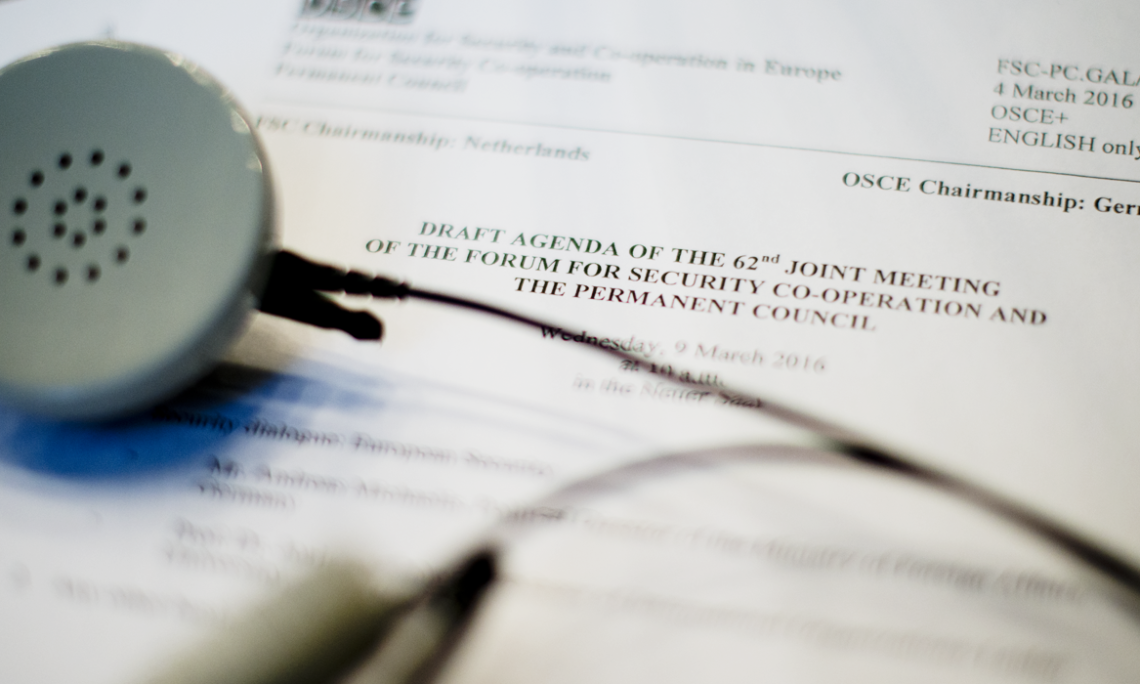 Thank you, Madam Chair, and thank you to you and the Chair of the Permanent Council for giving us the opportunity to discuss the broad topic of European security, which we deal with each day as we engage in the practical work of this Organization.

The United States would also like to thank and welcome Ambassador Michaelis and Professor Voorhoeve to this joint FSC-PC meeting, and thank you very much for your remarks. I think that we could have many many hours of discussion about the many issues that you each raised, and I found both sets of remarks incredibly stimulating.

It is worth taking a step back every once in a while to remind ourselves that the OSCE is more than committee meetings, field missions, and PC statements – the OSCE is a key part of the rules-based system that is the basis for European, Eurasian and international security.

As President Obama’s National Security Strategy makes clear, the United States is committed to a rules-based international order that promotes global security and prosperity as well as the dignity and human rights of all individuals. This element of the U.S. National Security Strategy, the promotion of security, prosperity, and human rights, reflects the OSCE’s comprehensive approach to security, which explains why we value this Organization and the contribution it makes to the security of the OSCE region.

A rules-based international order is, by its very definition, predicated on rules recognized by all. For us here, in this joint FSC/PC, the rules are the principles and commitments adopted by all 57 participating States. We have confidence in these principles and commitments:  The principles in the Helsinki Decalogue remain the core for durable security in this region. The vision of a new Europe reflected in the Charter of Paris is the vision that we should continue to pursue. If the experience of the last two years has shown us anything, it is that if the rules have been broken we should reinforce them, not rewrite or weaken them. The current challenge to European security stems not from a lack of structure or rules, but from a lack of implementation of existing international obligations and OSCE commitments.

Germany chairs the OSCE at a time when Europe is facing its most significant security crisis since the end of the Cold War – a crisis which stems from Russia’s aggression against its neighbor, in violation of international law and with total disregard for OSCE principles and commitments. The United States is grateful to Germany for assuming the Chairmanship at this critical time.

We look to Germany to strengthen security across the OSCE region by strengthening the OSCE and the rules-based international order of which it is an integral part. We are dedicated to working with the German Chairmanship in pursuit of these goals, and offer several recommendations that we can all support the German Chairmanship on for achieving it:

First, ensure that the OSCE makes full use of and enhances its toolbox to address the ongoing occupation of Crimea, and the ongoing conflict, precipitated by Russian aggression against Ukraine; and also to support reform and reformers in Ukraine. Today, on March 9, we might ask: “What more could the OSCE and its participating States do to encourage Russia to release Nadiya Savchenko and others it continues to hold in contravention of its commitments under the Minsk agreements?”

Second, guide the OSCE strategically. We should take advantage of the OSCE’s comprehensive membership to tackle tough issues that have a real bearing on common security. Many of those have been raised in the addresses that you offered today. And Professor Voorhoeve, you spoke of the NATO-Russia Council, and without prejudice to the conversations going on in Brussels, I would just point out that there is an opportunity twice a week in the FSC and in the PC here in Vienna for Russia and the rest of us to engage in the kind of good-faith conversation that you encouraged. I think that some of our colleagues here may have some advice for our counterparts in Brussels about the prospects for that good-faith conversation based on what we’ve heard today and in recent months and years. But I would just emphasize the fact that we do have this platform for dialogue, in which Russia or any other state can put any issue pertaining to European security on the table, and invite a good-faith conversation on it.

Third, we should strengthen engagement with civil society and preserve the OSCE’s work to promote respect for human rights and fundamental freedoms, without which lasting security among states is not possible. ‎Professor Voorhoeve, you also mentioned the Representative on Freedom of the Media, which is a key institution of the OSCE. Russia’s obstructionism with regard to that institution is an example of the challenge that we have: we heard from the distinguished Russian colleague today in terms of a stated Russian commitment to supporting international institutions, to supporting the OSCE, and to engaging in good faith. Yet we see a contrast between that stated commitment, which is sometimes offered here, and the actions that Russia takes, which are damaging to the institution and to our common security.

Fourth, we should press forward to reach agreement on updated transparency and confidence building measures relevant to today’s security situation. The Vienna Document—to which all 57 participating States are committed—epitomizes the commitment of this community to a rules-based order. It needs to be updated and modernized to address contemporary challenges. Much of this work, for example on risk reduction, should be of concern to both the PC and the FSC. And we should jumpstart this work. We should display a sense of urgency, and move more quickly, to discuss specific proposals using working groups, and move this agenda forward.

Fifth, we should mobilize the OSCE to address and prevent conflict. We should enhance the OSCE’s speed and quality of response to emerging regional challenges, while re-energizing efforts to address the protracted conflicts in Moldova and Georgia and over Nagorno-Karabakh. And we should use the OSCE as a platform for tackling other pressing regional and global issues of the day—including the refugee and migrant crisis and countering terrorism.

In closing, let me say that, from the U.S. perspective, European security means a Europe – and a Eurasia – that is whole, free, and at peace. The United States remains committed to this goal, and to the OSCE as an essential means to achieving it.

Thank you, Chairs, and thank you again to our speakers.

As delivered by Ambassador Daniel B. Baer to a Joint Session of the OSCE Forum for Security Cooperation and the OSCE Permanent Council