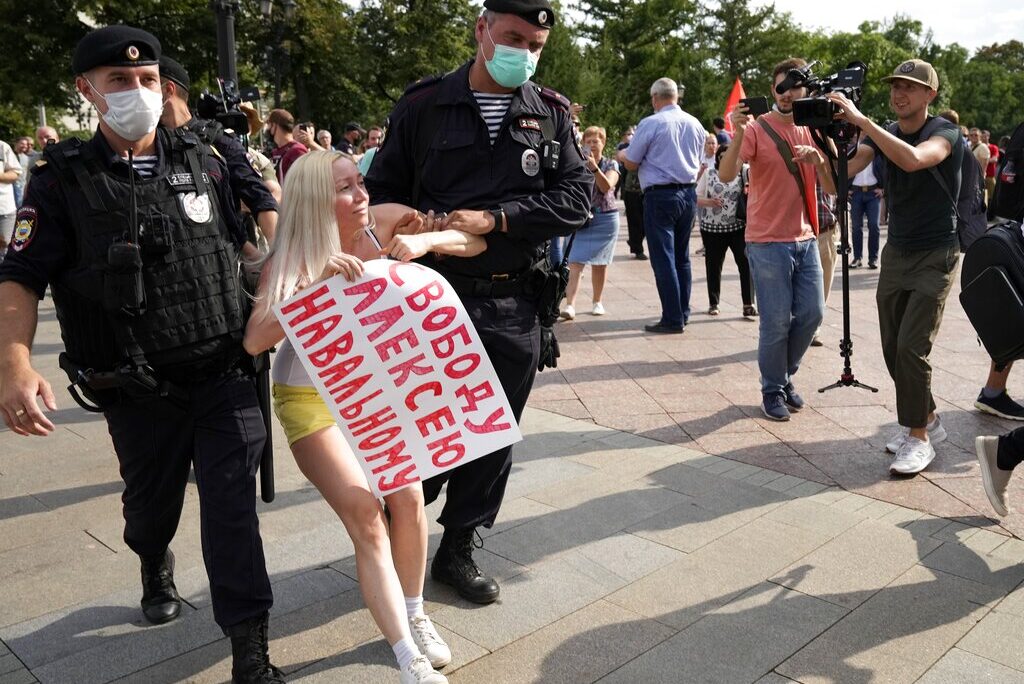 Just over one year ago, leading Russian opposition figure Aleksey Navalny was poisoned with a chemical weapon by the security services of his own government.  When Navalny returned home in January, after a recovery that required a medically induced coma and mechanical respirator, he was detained and in February given a two-and-a-half-year prison sentence on politically motivated grounds.  The world has not forgotten the cruelty and injustices to which Mr. Navalny has been subjected for his courageous anti-corruption activism.  We call again for his unconditional release.  In the months since Navalny’s imprisonment, Russia’s authorities have engaged in an all-out campaign of repression against his movement, designating affiliated organizations as “extremist,” systematically harassing and arresting his associates, and blocking dozens of internet resources associated with Navalny and his supporters.

The campaign against Navalny and his supporters is part of a wider effort to silence pro-democracy voices in the lead-up to this month’s Duma elections.  Under various pretenses, authorities have systematically cleared the electoral field of candidates or expected candidates the Kremlin finds objectionable, effectively guaranteeing that next month’s elections will not be free or fair.  Some presumptive Duma candidates, such as Moscow municipal deputy Ketevan Kharaidze, are now deprived of their liberty on spurious charges, while others, like Dmitry Gudkov, were compelled to leave the country after receiving threats.  In a clear attempt to confuse voters, two spoiler candidates were put on the ballot in St. Petersburg.  Both legally changed their names in order to match the name of an opposition candidate running for the same seat, Boris Vishnevsky. The recent designation of the renowned election monitoring organization Golos as a “foreign agent” further presages a lack of transparency in what will be a staged election.

Meanwhile, Russia’s authorities continue their sweeping campaign against   independent journalists and media outlets, further restricting voters’ access to  information in the crucial months leading up to Election Day.  Russia’s “media foreign agent” label, which continues to be applied to new outlets and individuals—including most recently Dozhd TV—stigmatizes independent reporting, undercuts news organizations’ ability to attract advertising revenue, and has a broader chilling effect on the media.  In June, the online outlet VTimes announced its closure after it was labelled a “foreign agent.”  The designation in July of the investigative news website Proekt as an “undesirable foreign organization” effectively outlawed any cooperation with it.  Proekt had published investigations into high-ranking officials.

We will take every opportunity to raise and discuss all these serious concerns despite the fact that Russia continues to block decisions regarding the 2021 HDIM.  Russia will not escape scrutiny of its implementation record.  The people of Russia, like all people, deserve a government that upholds their human rights and fundamental freedoms.  And so, it is fitting that we honor the legacy of an unyielding champion of human rights and former Soviet political prisoner, Sergey Kovalyov, who died at the age of 91 on August 9.  Through Mr. Kovalyov’s lasting contributions we can trace the history of the modern human rights movement in Russia—from the Action Group for the Defense of Human Rights during the Soviet era, to the establishment of Memorial—the respected organization that restored to the people of Russia their own buried past, and which today is absurdly smeared by the Kremlin as a “foreign agent.”  Mr. Kovalyov fiercely pressed for democratic reforms and accountability, from inside government as a member of the State Duma, and later from outside it.  As Russia’s landscape darkened, his was always a fearless voice for human dignity and liberty.  Among the many human rights organizations in which Mr. Kovalyov served was the Moscow Helsinki Group.  His son, Ivan, was also an early member.

In the spirit of Sergey Kovalyov, we call on Russia’s authorities to end their repression of human rights defenders, political opponents, and independent journalists, and to respect the human rights and fundamental freedoms of all.