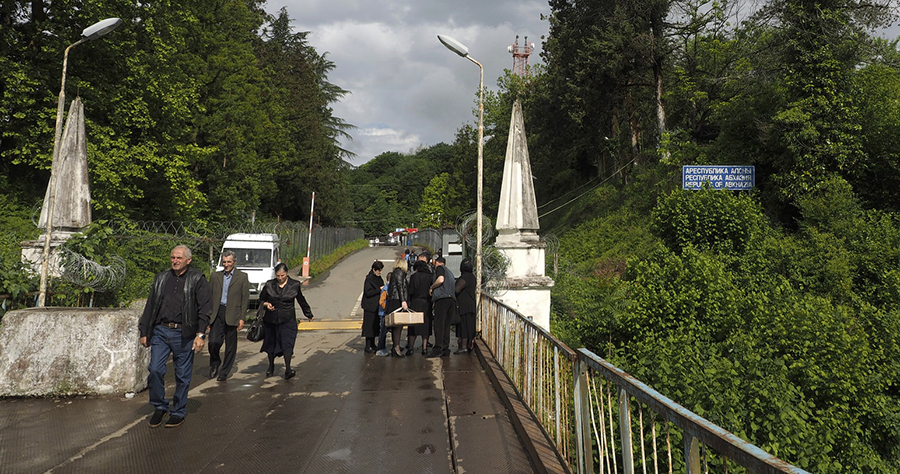 Crossing the administrative boundary line between Georgia and its province of Abkhazia at Patra Enguri River (photo: Flickr/Clay Gilliland)

The United States condemns the destruction of a registered historical site near the village of Tsebelda, in the Gulripshi district of the Abkhaz region of Georgia.  The destruction by Russian forces on January 3 in order to prepare the area for a military firing range for its Southern Military District’s 7th brigade is in contravention of Georgia’s sovereignty and territorial integrity.  The site consisted of ruins dating from the 8th and 9th centuries and the late Middle Ages, as well as a 20th century cemetery.  All of these elements of Georgia’s, and the Caucasus’, cultural heritage were irretrievably lost.

Georgian President Margvelashvili’s has denounced the razing of this site as an “act of vandalism in violation of international law, including the 1954 Hague Convention on the Protection of Cultural Property in the Event of Armed Conflict.”  In response, the United States expects the relevant local authorities to provide the international community full and unfettered access to the site through the Gali IPRM.

Russia’s continued occupation of Georgia’s Abkhaz and South Ossetian regions is unacceptable.  We reiterate our calls for Russia, as a party to the conflict, to fulfill its obligations under the 2008 ceasefire agreement, including by withdrawing all its forces to pre-conflict positions, providing unhindered access for humanitarian assistance, and reversing its unilateral recognition of these Georgian regions as independent states.  We unequivocally support Georgia’s sovereignty, independence, and territorial integrity within its internationally recognized borders, as well as its aspirations to integrate into Euro-Atlantic institutions.

We are concerned that the announcement by de-facto Abkhaz authorities of the closure of two controlled crossing points along the Abkhaz administrative boundary line – at Nabakevi-Khurcha and Meore Otobaia-Orsantia – by the end of this month could further restrict freedom of movement, including of schoolchildren and patients requiring medical treatment.  We are also concerned that de-facto Abkhaz authorities intend to create an enlarged “border zone” along the Abkhaz administrative boundary line, requiring special permits to enter, which would further hinder movement.

In closing, let me reiterate that the United States encourages the Chairmanship to resume consultations on re-establishing a meaningful OSCE presence in Georgia.