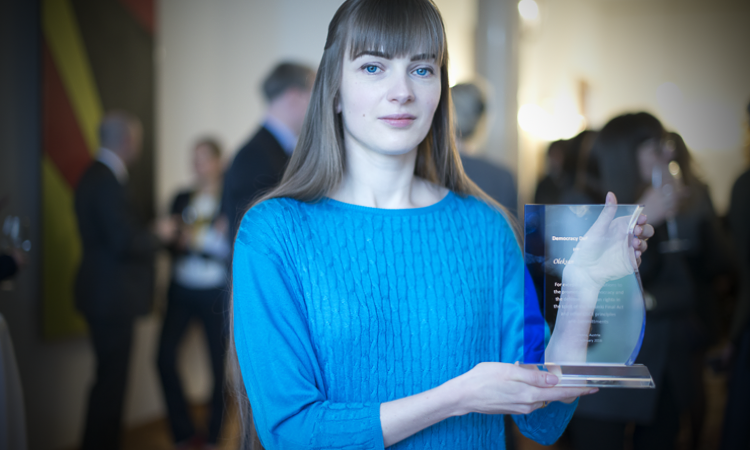 I congratulate Oleksandra Matviychuk on her selection for the Democracy Defender Award, and on the work on behalf of reform, accountability, human rights, and rule-of-law that this award celebrates.

Two years after Maidan, the work to make good on the promise of the Revolution of Dignity goes on.

And it is the voices of people like Oleksandra, of advocates and activists, of concerned patriots who refuse to live under the yoke of corruption for another generation, who demand fairness and respect for human rights, who are committed to a unified, democratic, prosperous European Ukraine, it is these voices in their thousands and millions that inspire persistence and remind everyone that there is only one way forward, that there is no alternative to continuing the fight for reform and for a stronger Ukraine.

This week, we also commemorate the shocking murder of Boris Nemtsov –gunned down in the shadow of the Kremlin on February 27, 2015. In a week when we commemorate one democratic activist slain for his ideals, we honor another who carries on the mission shared by all those committed to liberty and human dignity everywhere. It is particularly fitting, therefore, that Zhanna Nemtsova is here with us today. Thank you, Zhanna.

The OSCE is founded upon the truth that where human rights and fundamental freedoms are not respected, security and prosperity are unsustainable and fragile. The cause of human rights activists and independent journalists—who, through their work, push for accountable and responsible government, who demand rule-of-law and call out violations—their cause is that of peace and prosperity, their work contributes to building the kind of lasting peace that is grounded in respect for the dignity of every person.

The U.S. Mission is honored to join with colleagues from over a dozen other delegations to the OSCE to celebrate democracy and human rights today, and we look forward to working together on the road ahead.