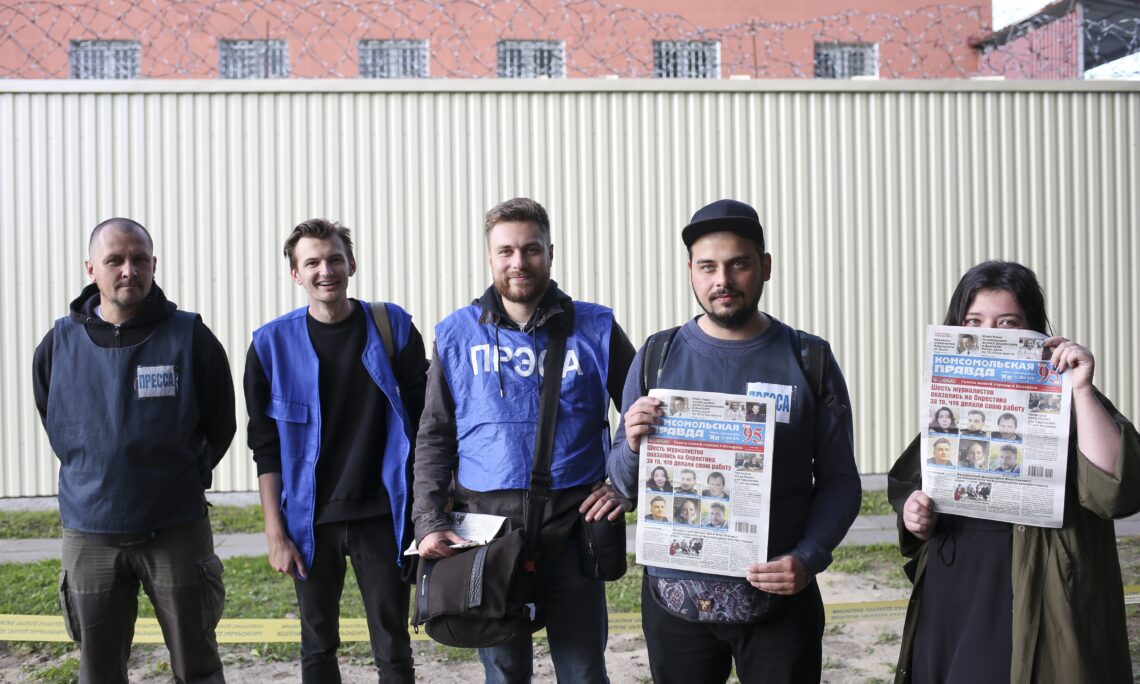 Belarusian journalists pose for a photo after their release from the detention center in Minsk, Belarus. (Tut.By via AP)

to the Permanent Council, Vienna
February 18, 2021

The United States expresses its deep concern regarding the February 16 raids on the homes and offices of Belarusian journalists, human rights defenders, civil society leaders, and independent workers’ organizations in Minsk and elsewhere across the country.  We join ODIHR and the Swedish Chair in calling on the Belarusian authorities to respect the exercise of human rights and fundamental freedoms of expression, peaceful assembly, and association along with the legitimate work of those who seek to protect the rights of their fellow citizens.  Unfortunately, this episode is just another in a long series of draconian measures the Belarusian authorities have used to evade accountability for their human rights abuses since the fraudulent August 9 elections.

During the February 16 raids, police searched the offices and homes of those affiliated with several prominent civil society organizations, including human rights organization Viasna, the Belarusian Association of Journalists, and the independent trade union of Workers in the Radioelectronics Industry.

They detained or targeted for searches at least 30 people and removed equipment and files, all in an attempt to intimidate independent voices and prevent their documentation of abuses by the authorities.  Last year, several OSCE participating States selected members of Viasna as the winners of the “Democracy Defenders Initiative” for their efforts in defending human rights in Belarus and building a just, free, and democratic society for all its citizens.  Sadly, this is not the first time the Lukashenka regime has targeted this leading human rights organization for harsh repression.

We join democratic governments and human rights organizations around the globe in urging the immediate release of all political prisoners in Belarus.  Many have been held on trumped-up charges since well before the presidential elections last August.  We also call for the immediate end of the brutal crackdown against Belarusian civil society and the Belarusian people.  The use of violence and other repressive measures to suppress dissent flies in the face of the very commitments Belarus has made as an OSCE participating State.  We remind those Belarusian authorities and members of the security services who commit violence and other abuses against peaceful protestors, human rights activists, members of opposition parties, and independent journalists their current impunity will not last forever—sooner or later, they will be held accountable for their abhorrent deeds by both the Belarusian people and by the international community.