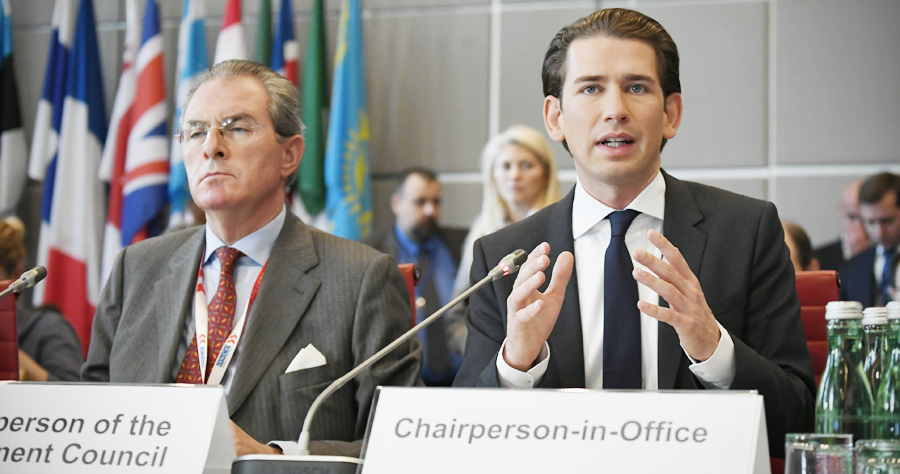 As delivered by Acting Deputy Chief of Mission Michele Siders
to the Permanent Council, Vienna
September 29, 2017

First, I would like to thank Foreign Minister Kurz for his introduction and for his commitment to countering violent extremism (CVE). Thank you as well, Secretary General Greminger, for highlighting current OSCE efforts in this regard.

Professor Neumann, the United States warmly welcomes you to the Permanent Council and thanks you for your report. Its subject could not be more timely. The threat of violent extremism confronts us all, crosses every border, and puts the lives of our citizens in danger. This is a challenge that should unite us.

No terrorist group poses a greater threat to the OSCE region than the Islamic State (ISIS) and its allies. While the Islamic State is being routed from its safe haven, the threat it poses is far from contained. As ministers discussed in Mauerbach in July, a change in ISIS’s strategy is underway. Its followers are being encouraged to act on their own, in their home countries, instead of travelling to Syria or Iraq.

This shift in ISIS’s approach demonstrates that countering violent extremism is as important now as ever. In doing so, however, we must keep in mind our commitments and international legal obligations to protect human rights and fundamental freedoms. CVE activities should not be used as an excuse for oppressive law enforcement tactics, which can foster real and perceived grievances that terrorists exploit for recruitment purposes. Instead, community-oriented approaches to policing can bridge the gap between law enforcement and the people they protect and serve, so that the general public becomes a key partner in identifying and preventing radicalization to violence. Your report, Professor, provides examples of how this works.

However, community-based approaches cannot succeed where there is impunity for human rights violations and abuses. In such cases, people will fear the police, not trust them. When governments violate human rights, they undermine the very security they purportedly seek to protect. When fundamental freedoms are strong, healthy political processes can thrive. These can give people hope and an ability to influence their future through peaceful political means.

Professor, this year’s counterterrorism conference also highlighted our collective need to ensure an effective response to returning foreign terrorist fighters. As Chairperson-in-Office Kurz observed in May, more than 10,000 citizens from the OSCE region have left to fight in the Middle East, and most have yet to return home. While prosecution must be a key pillar of our efforts, we must also work to develop effective prevention and intervention efforts, to include rehabilitation and reintegration programs for these individuals, as many likely will serve only short sentences and then be released back into society. Some will return with their families, underscoring the need for a holistic response.

We must also address the terrorists’ message and ability to recruit new followers. That includes countering terrorist recruitment, mobilization, and inspiration to violence – much of which occurs online. But in bolstering our efforts to counter the use of the Internet for terrorist purposes, we must respect freedom of expression and remember that the Internet itself is not the source of terrorism. Censoring the Internet, or engaging in unlawful or arbitrary surveillance of it, undermines the Internet’s potential to spread the very ideas and connections that are vital to preventing violent extremism. The new OSCE e-learning module on this issue addresses some of these challenges. A great example of countering violent extremism online is the OSCE’s #UnitedCVE campaign, which has reached over 20 million people.

We are heartened by the creation of the Global Internet Forum for Counterterrorism (GIFCT), as an effective method to engage social media companies on counter terrorist efforts. I would also note that on the margins of September’s UN General Assembly, Global Counterterrorism Forum (GCTF) members endorsed the Zurich-London Recommendations on Preventing and Countering Violent Extremism and Terrorism Online. These internationally-recognized, non-binding recommendations include good practices for content-based responses, while respecting freedom of speech and upholding the rule of law.

There are ways to engage with the private sector that are consistent with our OSCE commitments to protect freedom of expression and freedom of religion or belief. For example, Twitter announced in September it had voluntarily suspended more than 935,000 ISIS-related or affiliated accounts for violations of Twitter’s terms of service between mid-2015 and June 2017.

Professor Neumann, we agree with you that the OSCE can do more to counter violent extremism. One important tool in the OSCE’s toolbox is scenario-based multi-stakeholder seminars, which enhance interagency and whole-of-society collaboration, and help develop good practices that can be shared at regional, national, and community levels. Such seminars can also identify areas where institutional reform or programmatic engagement can make a key difference in responding to the threat. We agree that OSCE field missions are well-placed to do more work on CVE. We encourage them to build on the findings from these exercises by facilitating the reforms and programmatic responses necessary to prevent and respond to the threat.

Professor Neumann, thank you again for your insights, analysis, and recommendations.