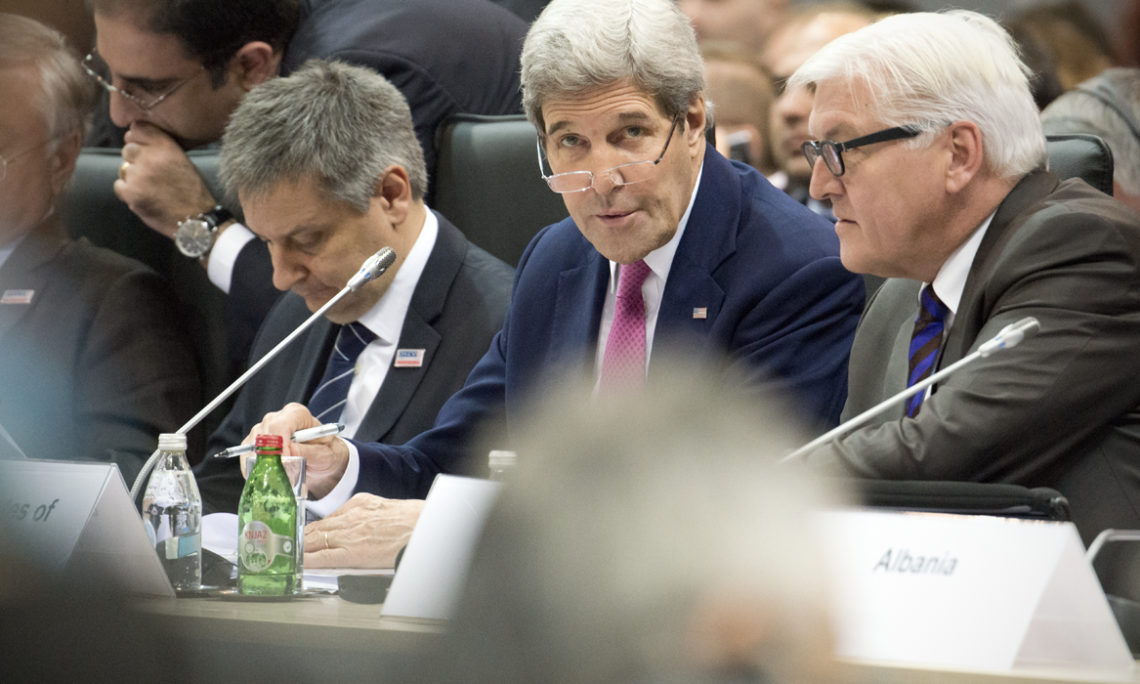 In his remarks at the opening of the annual OSCE Ministerial meeting –held this year in Belgrade-on December 3-4, Secretary of State John Kerry called for Russia to fulfill its commitments under the Minsk agreements, including withdrawing Russian forces and weapons, in order to resolve the conflict in eastern Ukraine.

While Russian Foreign Minister Lavrov continued to deny Russia’s role in the conflict, dozens of other ministers joined Kerry in calling on Russia to implement the agreements it signed with Ukraine in Minsk in September 2014 and February this year.

The two-day meeting of the world’s largest regional security organization ran past midnight on the second day, with tired diplomats trying to salvage negotiations on a number of agreements on a range of topics including Ukraine. In the end, while they managed to reprise a unanimous message of solidarity that they had issued in the wake of last month’s attacks in Paris, Russia prevented even a modest declaration about the OSCE’s role in the Russia/Ukraine crisis.

As the Serbian Foreign Minister closed the conference early in the morning on December 5, exhausted diplomats were reflecting on the extent to which Russian aggression against Ukraine had deadlocked efforts to deal with security and human rights issues in the 40-year-old European security organization.

Many of the Foreign Ministers had issued a clarion call to reinforce human rights and push back on the crackdown on civil society in Russia, Azerbaijan, and several Central Asian states. Secretary Kerry read from President Obama’s Proclamation that, “We each have a continuing responsibility to uphold standards of [the landmark Helsinki Final Act], to recognize the inherent dignity and human rights of every person; to respect the sovereignty and territorial integrity of every member-state; to refrain from the illegal or unjustified use of force across the OSCE region.”

Russia’s destabilizing actions in Ukraine, concerns about terrorism, the ongoing refugee crisis in Europe, and the shrinking space for civil society across the whole OSCE region were common themes echoed throughout the Ministerial plenary sessions.

“We have too many shared challenges that strain the international system to be able to afford actions from states that attack and undermine its foundational principles from within,” stated U.S. Permanent Representative to the OSCE, Ambassador Daniel Baer in the closing session. “We can and should do more to bolster a rules-based order grounded in human dignity, including working with civil society.”

As ministers met, activists gathered at a nearby hotel in a parallel civil society conference, after which they presented their recommendations to OSCE Chair Ivica Dačić. The United States stands firmly by those courageous civil society activists and journalists in their efforts to press governments to respect human rights and freedoms as a crucial contribution to the security of all OSCE participating States.