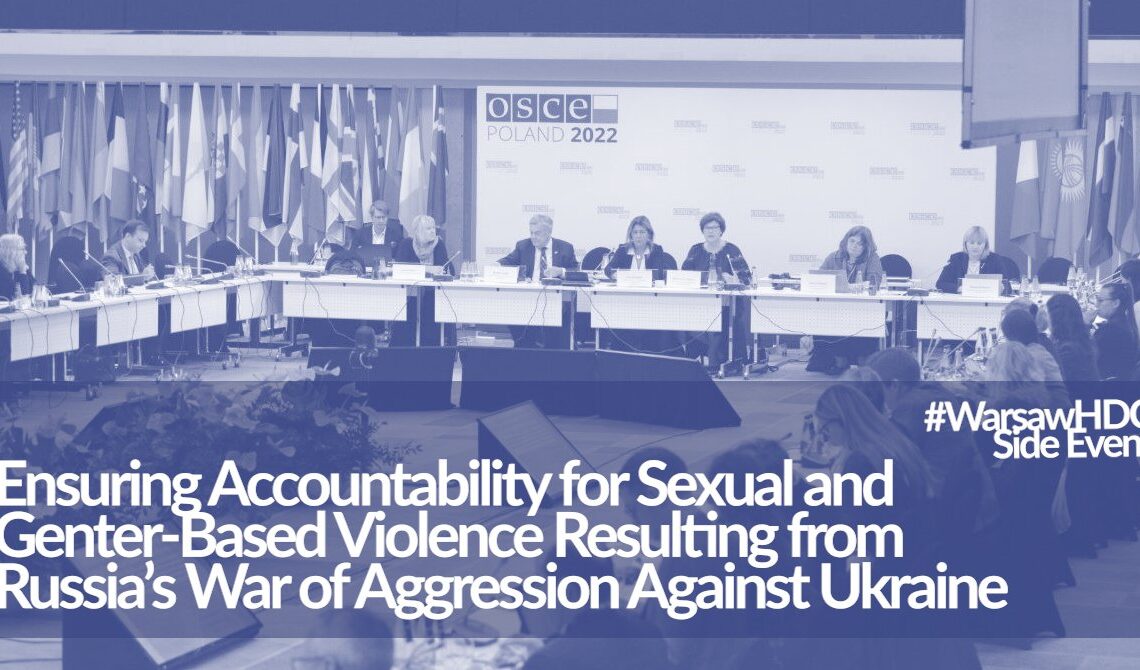 WarsawHDC Side Event: Ensuring Accountability for Sexual and Gender-Based Violence resulting from Russia’s War against Ukraine

As prepared for delivery by U.S. Ambassador Michael Kozak

to the WHDC Side Event on WPS and Ukraine, Warsaw
October 3, 2022

I am pleased to give the opening remarks at today’s side event on holding Russia accountable for perpetrating conflict-related sexual violence in Ukraine.  We have an impressive line-up of speakers.  I would like to thank the 33 delegations for also joining with us to co-sponsor and convene today’s side event.  In the context of Russia’s war of aggression against Ukraine, the speakers will explore how the international community, civil society and other stakeholders can cooperate to support international and Ukrainian accountability mechanisms and pursue justice for sexual and gender-based violence at the hands of Russian soldiers.

Early on after Russia intensified its unprovoked war of aggression against Ukraine, we began hearing reports how Russian soldiers raped Ukrainian women in front of their children in places like Bucha after breaking down the doors where they had sought shelter.

While the burden of sexual violence in conflict tends to be perpetrated by men against women and girls, this is not only the form this violence takes.  Conflict-related sexual violence is an act of power, of subjugation, and a war crime.  The use of rape and sexual violence as instruments of war must stop.  We cannot stand idly by as Russian soldiers commit these heinous war crimes.  We must work together to bring the perpetrators to justice, and the governments that turn a blind eye or condone these crimes must be held accountable.  And, we must do as much as possible to help survivors come to terms with the trauma inflicted upon them.

We know that Russian soldiers are raping Ukrainian women and girls, men and boys.  Ukrainian officials, as we’ll hear today, are pursuing all avenues to seek justice and hold perpetrators accountable for these crimes.  Investigators regularly turn up evidence of sexual violence in the mass graves being discovered in liberated areas.  Recently, on September 23rd, the Commission of Inquiry on Ukraine reported to the UN Human Rights Commission on their findings from Kyiv, Chernihiv, Kharkiv, and Sumy, that they had uncovered evidence of war crimes including of sexual and gender-based violence and that the victims ranged in age from four to 82 years old.  Horrifying personal testimonies in print and electronic media attest to the appalling tragedies survivors endure at the hands of Russian soldiers.  Civil society organizations and service providers in Ukraine and working with Ukrainian refugees also report an increased need in their services to help survivors.

We must take action.  We must do more to promote justice for survivors and to hold perpetrators accountable.  We owe it to the victims.  We have a strong framework of international obligations.  The 2019 UN Security Council Resolution 2467 strengthens our justice and accountability framework to prevent and respond to conflict-related sexual violence based on survivor-centered responses.  This landmark resolution was passed unanimously in the UN Security Council; yet it is Russia that flouts exactly these commitments, as well as its obligations under international law and international humanitarian law.

Today we will hear from the Ukrainian Commissioner on Gender Policy, Kateryna Levchenko, about Ukrainian efforts to hold Russian soldiers accountable for their crimes.  We will hear from Professor Oostervelt from the Western University of Canada about international legal accountability.  We will hear voices from Ukrainian civil society, Ms. Marta Chumalo, about the efforts of her NGO “Women’s Perspectives” and those of other civil society organizations to support survivors and to seek justice for them.  Finally, we will hear from the OSCE’s Special Representative on Gender Equality, Ms. Liliana Palihovici, about how the OSCE can support international and local efforts.  The OSCE can and does do a lot.  I look forward to your ideas and recommendations for future OSCE action to help Ukraine and international efforts to prevent conflict-related sexual violence and to hold the perpetrators accountable.