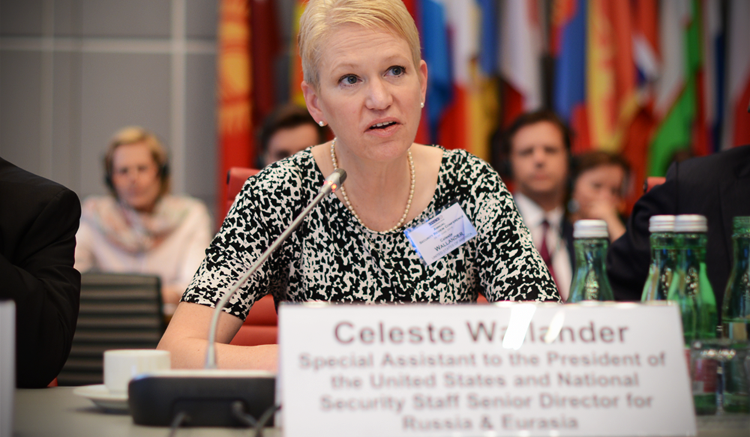 And let me especially thank Special Representative Sajdik for his wonderful intervention, and for his own work and that of the team. I fully take on board your message, and really value that you offered it here today.

Let me thank you for inviting me to participate in this important panel. Our meetings this week provide the opportunity to share concerns and discuss how we can make progress on a wide range of challenges – from a common response to migration, to updating our arms control arrangements for the 21st century; to achieving peaceful resolution to the conflict in Ukraine – a peaceful resolution that recognizes and respects that nation’s sovereignty, independence, and territorial integrity within its internationally recognized borders.

Let me also express my country’s gratitude to Germany for taking on the task of chairing the OSCE at this critical time in European security. The scope of the security challenges we face today as a community is unprecedented. Threats to a Europe whole, free and at peace come from all compass points and all dimensions. We deal today as well with the destructive actions of non-state actors, violent extremists whose values do not respect basic human rights and dignity. The need for all of us to uphold the tenets of the Helsinki Final Act is as real today as it was forty years ago.

I congratulate the OSCE for its leadership role in international efforts to resolve the crisis caused by Russia’s aggression in eastern Ukraine and Russia’s attempted annexation of Crimea. The United States commends the work of the courageous men and women who participate in the OSCE’s Special Monitoring Mission and the Observation Mission at the two Russian checkpoints of Gukovo and Donetsk. This work is critical and the OSCE serves an important function as the eyes and the ears of the international community.

Russia claims that the conflict in eastern Ukraine is “internal.” Russia continues to supply personnel and equipment to combined-Russian-separatist military forces in Donbas. The OSCE and Ukrainian military have documented Russian shipments to combined Russian-separatist forces – shipments of sophisticated hardware that does not exist in Ukrainian arsenals, including the so-called electronic warfare “Christmas trees, ” the MRO-A man-portable thermobaric rocket launchers, and SA-15 “Gauntlet” missiles.

At the same time, Moscow has sought to conceal this involvement by pursuing a strategy of “blinding” the OSCE’s Special Monitoring Mission by restricting monitors’ access to separatist-controlled territory, employing threats and intimidation, and systematically destroying OSCE cameras and ‎UAVs.

We once again call on Russia to stop the violence and fully implement its Minsk commitments. Ukraine cannot be expected to make progress on the political elements of Minsk until there is sustained quiet on the line, pullback of heavy weapons, and unimpeded access for OSCE monitors – three commitments that Russia signed on to in February 2015, but which we still not have seen fully implemented. including up to Ukraine’s internationally recognized border with Russia.

Despite Russia’s aggression in eastern Ukraine and its continued occupation of Crimea, Ukraine continues to make progress on reforms, bringing the country closer to fulfilling the dreams of those who sacrificed on the Maidan to set Ukraine on a European path. We welcome in particular the recent passage of judicial, energy, and corporate governance legislation as important steps in Ukraine’s reform program. We will continue to stand by Ukraine as it takes difficult steps to fight corruption, loosen the hold of oligarchs over business and politics, and build a modern, transparent, prosperous country for all of its citizens.

We thank France and Germany for their work in the Normandy Format to facilitate implementation of both the political and security aspects of the Minsk agreements. We continue to work to support their efforts to accelerate a peaceful resolution to the crisis.

We have been very clear with Moscow that sanctions will remain until Moscow fully implements its commitments under the Minsk agreements. Finally, we will not recognize Russia’s attempted annexation of Crimea, and our separate, Crimea-related sanctions will remain in place until that piece of territory is returned to Ukraine.

Respect for the basic principles of international law, the Helsinki Final Act, and other OSCE commitments has not been universal to this hall; a reality demonstrated by Russia’s actions in Ukraine. This crisis has reminded us that the OSCE must maintain and continue to invest in all of its tools to enable the international community to respond to crises and security challenges, while also reaffirming our principles and commitments.

I’d like to thank the Chair again for this opportunity to share our views, and to contribute to the work going forward on OSCE leadership.

As delivered by Special Assistant to the President, Celeste Wallander, in Vienna