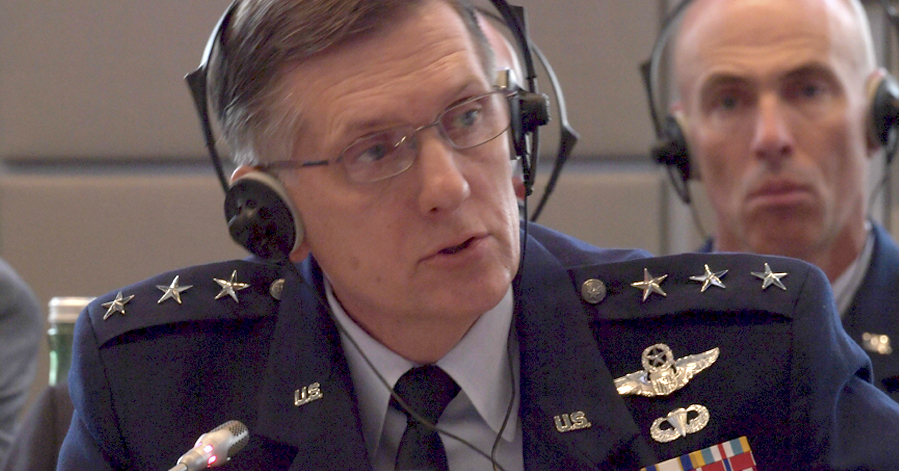 Mr. Chairman, Ambassadors, Distinguished Colleagues, Ladies and Gentlemen, on behalf of our Commander, General Curtis Scaparrotti, and more than 60,000 American service members, civilians, contractors and all of their families, good morning and thank you for welcoming us here.

Let us take a moment to remember the families, friends and loved ones of those who were taken from us by terrorists in London last weekend.  And to the people of the nations affected by this senseless tragedy, know that America stands with you during this difficult time.

We also should honor the brave men and women who served during the largest multi-national amphibious landing and operational military airdrop in history:  D-Day.  We honor the 73rd anniversary today highlighting our continued U.S. commitment to European Security.

I am here today to personally inform you of the importance the United States attaches to this organization and to the Structured Dialogue.  I would like to acknowledge the impressive work that the OSCE does and the significant impact this organization has on maintaining a stable, peaceful Europe.  From OSCE’s Special Monitoring Mission to Ukraine; to the Vienna Document and the OSCE’s fundamental principles, including those reflected in the Helsinki Final Act, the OSCE is at the forefront of the international inter-governmental effort to increase transparency and stability across this vast continent. Thank you.

My remarks build on Acting Assistant Secretary of State John Heffern’s comments at the Structured Dialogue meeting in Vienna on April 7, where he outlined key U.S. threat perceptions, and on the comments of the Joint Staff at the Intercessional Military Doctrine Seminar in May, where we explained how those threats, many originating from Russia, have affected our military posture in the European Theater.

My mission today is to explain how and why our force posture has evolved over the last few years in the European Theater, particularly in response, frankly, to what we see as aggressive and unpredictable Russian behavior that violates fundamental international norms.

In March of 2013, the U.S. sent our last tanks in Europe back to the continental United States.  This removal of heavy equipment coincided with the inactivation of two U.S. heavy brigades, the 170th Infantry out at Baumholder, Germany, and the 172nd Infantry at Grafenwohr.  I can think of no more fitting day to talk about this fact than the D-Day anniversary.

Stop and think about that for a moment.

The United States had tanks in Europe since 1944.  And in 2013 we believed that we had finally closed that chapter in history.  The security situation in Europe had changed, we hoped, for the better.  It was a proud moment as we looked to a future with a more stable and peaceful Europe.  That success, despite Russia’s military action against Georgia in 2008, was the result of the efforts and willingness of the countries in this room to build mutual security and prosperity upon the rule of law and international agreements and organizations like the OSCE.

Let me make this point perfectly clear: we voluntarily inactivated our heavy fighting units in Europe and took our heavy battle equipment home!

Just under a year later, Russia, a country the U.S. thought was a partner in supporting the international order and rule of law – as well as in crafting an effective response to new threats — instead turned to the blatantly aggressive use of force to advance a political agenda.  Russia illegally occupied and attempted to annex Crimea and launched armed conflict in the Donbas region of Eastern Ukraine.

Faced with this threat, we have had no choice but to adjust our force posture accordingly.

Russia has demonstrated a disregard for the rule of law and flouted accepted norms of international behavior by trying to influence the internal politics of European Countries and the United States, conducting cyber and aggressive propaganda and misinformation campaigns throughout the Euro-Atlantic region, violating the INF Treaty and suspending implementation of the CFE Treaty, and undermining both the Vienna Document CSBM regime and the Open Skies Treaty through selective adherence or implementation of its commitments and obligations.

Particularly concerning is Moscow’s substantial inventory of non-strategic nuclear weapons in the European theater and its troubling doctrine that calls on the potential use of these weapons to escalate its way out of a failing conflict.

Additionally, Russian comments at the Intercessional Military Doctrine Seminar were particularly alarming.  Retired MG Pavel Zolotarev bluntly stated that Russia had to act in Ukraine and Georgia to prevent what it perceived as NATO from controlling the Black Sea.  When coupled with his statement that Russia had to act to ensure that Ukraine would not become a part of NATO, and that it should do so again if necessary, he painted a clear picture of aggressive and revanchist behavior on the part of Russia.

My boss, General Scaparrotti, EUCOM Commander and Supreme Allied Commander Europe, summarized this new dynamic in his force posture statement to the U.S. Congress in March.  He said: “Russia has turned from partner to antagonist… EUCOM fully recognizes the dynamic nature of this security environment, and in response, we are regenerating our abilities for deterrence and defense while continuing our security cooperation and engagement mission.  This requires that we return to our historical role… Accordingly, we are adjusting our posture, plans, and readiness to respond to possible future conflicts.”

Make no mistake though, for everyone in this room, the United States is steadfastly committed to the territorial integrity of every single one of our NATO allies.

We are meeting this new regional threat through the enhancement of our defense and deterrent capability and through measures to build the capabilities of our Allies and partners and ensure them of the steadfast U.S. commitment to this continent.  Our European Reassurance Initiative, or ERI, provided 3.4 billion dollars in 2017 to fund these efforts, and our President’s 2018 Budget request seeks 4.8 billion dollars for ERI in 2018.  This funding is a powerful signal of our rock-solid commitment to the peace and stability of Europe and the posture adjustments made possible through ERI are the hallmark of this defense and deterrent stance.

ERI has increased rotational forces in Europe including the deployment of periodic fifth-generation fighters, B-52 bombers, and other aircraft to the theater, and the heel-to-toe rotations of an Armored Brigade Combat Team as well as increased Naval and Marine Corps presence.

Additionally, we are increasing Army Prepositioned Stocks of equipment and enhancing our Air Force prepositioning capabilities so that we will, if required, be prepared to respond to contingencies.  We are making significant investments in infrastructure to support our day-to-day activities, while also enhancing our ability to provide a rapid response against threats made by aggressive regional actors.  Make no mistake, our highly trained, battle hardened Alliance dominates joint, multi-domain warfare; but only for defensive purposes.

We have expanded the scope of our involvement in defensive multi-national exercises and are serving as the Framework Nation for a multinational battle group in Poland as part of NATO’s enhanced Forward Presence, underscoring our commitment to Article 5.  We have not forgotten that the first and only time NATO’s collective defense has been invoked was in response to the 9/11 attacks on the United States.

As a B-52 pilot who spent years sharpening my skills in the Cold War, I tell you these things not with boastfulness, but with clear mind.  Satisfaction that we had persevered and maintained stability and peace in Europe is what I felt when we shipped that last U.S. tank out of Germany.

However, I tell you these things with a clear mind because our actions, unlike Russia’s, have been transparent and predictable.  We are a defensive Alliance; the most successful Alliance in history and we are committed to each other.

If I were standing here in 2013, this talk would have been completely different.  I would have told you about efforts to rebalance to Asia, troop and equipment reductions in Europe, and the deep sense of admiration we had for the peace and security of this continent that we forged together on a long road that began 73 years ago today.

But Russian authorities ripped up that script in 2014 when they illegally occupied and attempted to annex Crimea, when they backed separatist forces in eastern Ukraine, and when the use of force again became an instrument of national policy in Europe.  We must once again turn more of our attention to the security needs of Europe.

Our force posture is proportional and defensive in nature.  We do not seek, nor do we want to return to Cold War levels; instead, we are focused on increasing our presence via rotational forces that are postured and ready.  We also understand the tyranny of distance and realize we must invest in prepositioned equipment and access to infrastructure in case of crisis.  Our efforts demonstrate that we stand by our NATO allies and that we are fully committed to European peace and stability.

I would like to close by reminding everyone, especially our Russian colleagues, that our current troop levels were not inevitable.  They are the result of specific Russian actions.  We believe that all of us have more to gain by working together to counter the new threats we all face, some of which are epitomized in the recent attacks in London, and Manchester against civilian populations, including even children at a concert.

But when a country is invaded and occupied by a supposed partner state, its neighbors and their allies would be foolish not to take notice and take action.  Our hand was forced.  We hold out hope that Russia can change its behavior by reversing its illegal actions in Crimea and fulfilling its Minsk commitments, including the withdrawal and the full return of border control to Ukraine.  These actions would certainly affect U.S. decision making on our deterrence posture. Until we see positive moves that indicate a return to the rule of law and the international rules based order, we will be unable to return to our previous force posture.

Thank you all for your time today.