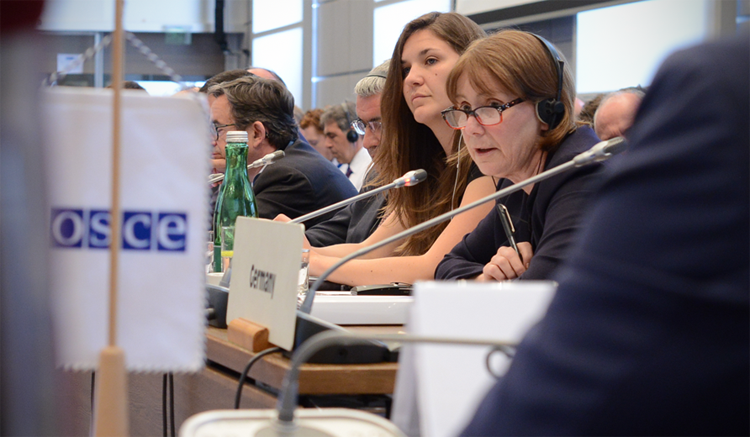 Before I begin, I just wanted to respond to some of the remarks made by our Russian colleague, just to note that that the characterization of NATO’s actions and intent are not accurate. These remarks ignore the fact that NATO is a defensive alliance, as well as NATO’s need to respond to the challenges posed by Russian aggression in eastern Ukraine and the attempted annexation of Crimea.

A Europe that is whole, free, and at peace; a Central Asia that is strengthening cooperation with neighbors and partners to build secure, stable, prosperous futures for its peoples; and full implementation of all Helsinki Final Act commitments by all members of this Organization remain our goals for this community.

We are not there yet.

The rules-based international system that we rely upon to achieve these aims is being undermined by the unilateral decisions of individual participating States and the actions of members of violent extremist groups.

We face acute challenges to European and Eurasian security: Russian aggression in eastern Ukraine and its attempted annexation of Crimea continue; terrorist incidents have occurred in multiple OSCE participating States; active conflict has returned to Nagorno-Karabakh; intolerance has risen as the refugee and migrant crisis across Europe has intensified.

We recognize the need for greater concerted efforts to prevent violence, address drivers of violent extremism, and defend the rules-based system that undergirds regional and global security. While it is impossible to predict what the future will hold, the strength of the OSCE lies in the values and principles that all 57 participating States around this table have committed themselves to respect and support.

The United States firmly supports the implementation of these commitments. We strongly refute assertions that gaps or weaknesses in our current European security architecture are the problem. Rather, some OSCE participating States have implemented policies that are inconsistent with the principles and commitments of the Helsinki Final Act that provide the foundation for this Organization. We need the political will to not only stand by these shared principles and commitments, but also to hold participating States accountable for their actions when they violate these norms.

The OSCE remains one of Europe’s most important institutions in pursuit of comprehensive security. We would be remiss at this conference if we did not also direct attention to NATO’s summit next week in Warsaw, which will focus on the challenges facing this region. NATO Allies will outline their vision for defense and deterrence in the 21st Century, recognizing that to keep its nearly 1 billion citizens safe, NATO needs to address security challenges from any direction, and projecting security and stability beyond NATO’s borders. NATO’s actions will be wholly consistent with allies’ political commitment core documents, which are defensive in character and not a threat to any nation.‎

As we spend the next three days here in Vienna reviewing the implementation of our common OSCE commitments, and facing conflicts in our region and transnational threats to our common security, we should focus on practical steps the OSCE can take to enhance its ability to anticipate, respond to, and prevent crises. The United States supports frank and open dialogue on these issues, but we must take action to achieve some progress before the ministerial meeting in Hamburg.

Among the tools at our disposal are confidence- and security-building measures to rebuild military transparency in Europe and to increase information-sharing. If we are serious about mutual reassurance and cooperative relationships, we need to work together to achieve a substantive update of the Vienna Document this year. There are also opportunities on the horizon for progress on the protracted conflicts.

More broadly, the horrifying actions of extremists in Brussels and Paris and elsewhere across the OSCE region, including in the United States, have underscored the urgency of making progress on all elements of OSCE’s comprehensive approach to security. We have more to do to fulfill our shared obligations and commitments to respect each other’s sovereignty and territorial integrity. We also need to do more to protect human rights, oppose bigotry, advance gender equality, and build inclusive civil societies that respect a free press and freedom of expression.

By the end of 2016, the United States would like to see Russia and the separatists it supports fully implement the Minsk agreements, including a comprehensive ceasefire, unimpeded access for the SMM, cantonment of heavy weapons, laying the groundwork for local elections in Donbas under Ukrainian law and in accordance with ODIHR standards, withdrawal of foreign forces, and the return to Ukraine of control over the portions of its international border with Russia that it does not now control.

We thank the German Chairmanship for its leadership at one of the most critical times in this Organization’s history and we look forward to a constructive exchange to reaffirm our values and commitments to overcome shared security challenges.

As delivered by Deputy Assistant Secretary for European Affairs Kathleen A. Kavalec at the Opening Session of the 2016 Annual Security Review Conference, Vienna