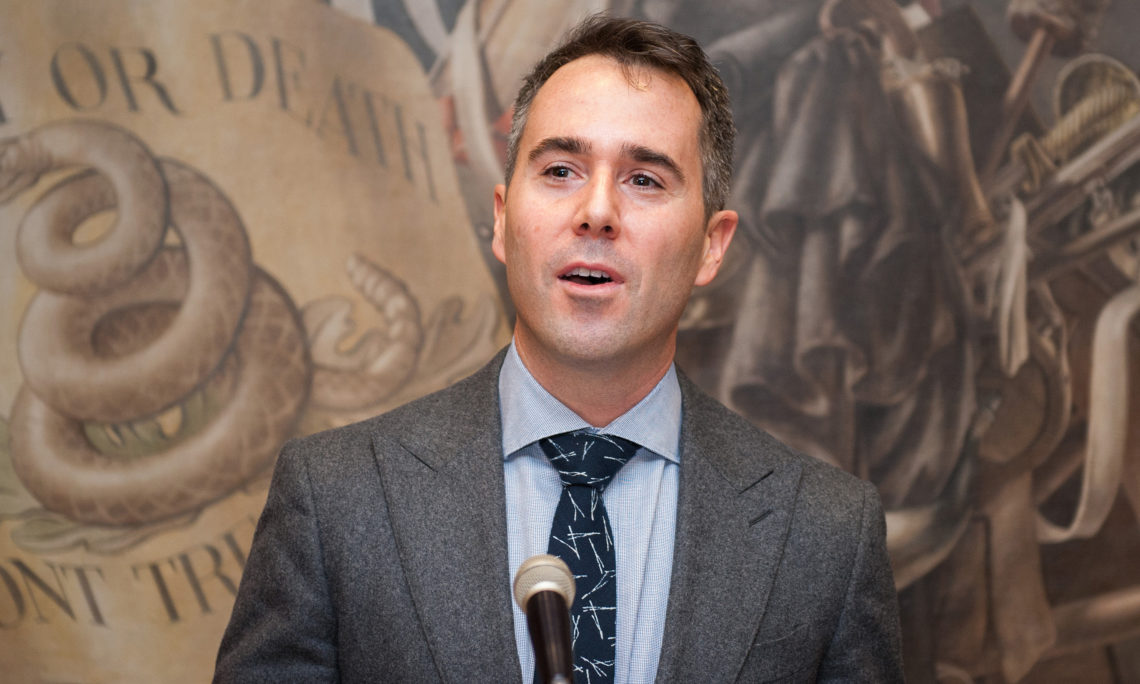 Farewell Remarks by Ambassador Daniel Baer | Statement to the PC

As delivered to the Permanent Council, Vienna
January 12, 2017

Thank you, dear Maria Pia, for those kind remarks. I worry that the portrait you offered was so generous that some colleagues may not recognize me in it, but I’m grateful for your embellishments. You know, I was quite worried about this final speech in the Permanent Council. I was worried that I might be misunderstood, so I’d like to deliver my statement today in the original.

Colleagues, colleagues. Just kidding. Don’t fall for it, as I’ve said before.

More seriously, I have had the privilege and opportunity to speak on behalf of my country in this forum so often over the last three plus years that really the only thing left for me to do today is to say a number of thank yous. Thank you for being here, thank you for putting up with me, for laughing, sometimes — but not often enough, really — at my jokes. Thank you for challenging and debating me, for listening (or so I like to tell myself) and for teaching me.

Some of you will recall that once or twice it has been pointed out in the Permanent Council that I am not a professional diplomat. I have been accused, in fact, of practicing “non-traditional diplomatic intercourse.”

So one of the things that I want to say today is how much I respect and admire those of you who have chosen to make diplomacy your life’s work. Thank you for what you do on behalf of peace, prosperity, and freedom. I have felt fortunate and humbled to be an interloper in your midst.

And I pay tribute to you all especially because your work matters so much today. We are at a difficult time for the OSCE, for Europe, for the world. We can all list the many challenges that our citizens face, that our governments face, and it feels like there are more of these than usual. But I think there is an added dimension for many of us right now. There is an intuitive sense that we are at an inflection point. And it is particularly at a moment like this that the work of diplomats, political leaders, civil society and others whose interactions make up international politics is so important.

This is not “the” moment — history has more than one — but this is a moment — it is our moment, and so much is at stake in what we do — or fail to do — together. As in other inflection points, we have the opportunity to manage and respond through politics, rather than through other means. And I hope we will take on that worthy political fight of our moment.

I want to offer one observation in this regard. It has become increasingly common to call for dialogue — and who could possibly be against it? Of course, dialogue is essential. But I think we should be mindful not to let dialogue become a polite way of saying “deal-making.” Real diplomacy cannot be reduced to this. For compromise, while often necessary, is not always good. As a friend recently remarked to me, a central challenge in politics is to rightly discern between the matters on which compromise is required or desirable, and the matters on which there can be no compromise — or else the entire political project is lost.

And that project remains a worthy and urgent one for us. The foundation of our shared political project — at Helsinki and beyond — was the freely taken agreement that our dialogue and our interactions would be anchored in common purpose. We agreed to put the shared interests of our citizens in peace, prosperity, and liberty, first, and to do that by adhering to certain well-reasoned principles that correspond to these goals.

These are things on which there can be no compromise — and those who are unyielding in their pursuit of these ends and in defense of these principles are not stubborn; they are strategic.

For if we submit to the temptation to put everything up for negotiation, if we agree to that kind of dialogue, then we condemn ourselves to a world in which international politics is nothing but coercive transactionalism. If we abandon the rules, then every interaction is just another deal, with everything — and everyone — on the table. Might has never actually made right, but might can coerce to achieve an outcome where it is unconstrained by justice and accountability. And coercion in international politics is rarely an entirely peaceful affair.

And so, colleagues, I hope we will reject the kind of deal-making which demeans our purpose. And along with it, I hope we will reject populism, which so inevitably and so completely fails those whose passions fuel it. We will reject nationalism, which offers the false comfort of superiority, and in so doing, holds societies back in shackles of aggression and intolerance. We will reject illiberalism — which is a bogus ideology defined by being against human freedom rather than being for anything. We should call out those leaders who pretend that this is a defensible idea, and not be distracted by their efforts to use public office for private gain.

But we should also remember that no matter how those destructive forces that we now see in our midst may posture, they are on the wrong side of history and time is not on their side. We must be confident, we must be determined, we must rebuild any institutions that they attack and rebuild them stronger than ever before.

And if we need a reminder of why this difficult and discouraging work is important, we need only look to the young generation of dedicated Europeanists in Ukraine who stood in the freezing cold of the Maidan and who today are fighting old forces to make good on the new promise of the Revolution of Dignity. We need only look, indeed, at any of our own societies, and recall that democracies and leaders are rightly judged not by how well they advance the interests of the rich and powerful, but by how effectively they defend the equality in dignity and in rights of the most vulnerable.

So let us confidently, optimistically, and without cynicism recommit ourselves to a mode of politics within and among states that is firmly grounded in human dignity. Let’s refuse to turn back to the era of power politics, and instead continue our progressive emancipation from zero-sum approaches by continuing to build a rules-based system that is a foundation for win-win approaches that deliver progress and a better life for the people of all countries.

Defending universal values — making them real in the world — isn’t a diplomat’s burden to bear. It is our honor to pursue. Thank you all for being diplomats. This is our fight. This is your fight.

Thank you to the interpreters — to the owners of those voices that I hear sometimes in my sleep — who have been the victims of my frequent attempts — usually in vain — to avert a gong, and who have repaid me with the kindness of masking my inability to pronounce long names of places and people. Thank you.

Thanks to conference services for making these meetings work. And thank you to all of those working on behalf of the OSCE here in Vienna and in the operations that happen out there in the real world. Thank you to our independent institutions, whose leaders are role models and true friends.

Diplomacy is a team sport, and it has been the honor of my life to work alongside the women and men of the U.S. Mission to the OSCE. These are world class professionals and world class friends. Any successes that might attach to me are rightly credited to them, and any mistakes that I have made have been because I momentarily escaped their wise supervision.

Hiring Kate is the best decision I’ve made since coming to Vienna. And the only wonder is that I managed to make it without her. She will be a fantastic leader of the U.S. Delegation in the coming weeks and months, and I am jealous of the many colleagues who will continue to work alongside her and the entire USOSCE team.

In the State Department system, Ambassadors have what is called — somewhat worryingly — “grabbing rights,” which means they are allowed to “grab” someone from anywhere in the world to be their executive assistant. I am so grateful that Stela responded favorably to my invitation to join me in Vienna — and that she has “grabbed” me back from so many mistakes and done so through long hours and with good humor for three and a half years.

I am grateful to colleagues in Washington who work hard every day to support our work here. I am particularly thankful for President Barack Obama — that unlikely President who has so often embodied and articulated the values with which I aspire to conduct my private and public life — for his leadership, his trust, and his dignity and grace.

The most important team in my life is a team of two. Brian received his Ph.D. in Particle Physics from Yale just two weeks before President Obama nominated me for this job. It would have been the logical time for him to pick where we should go and for his career to take off. It was an act of kindness and love for him to come with me and I am grateful to him. I am also grateful that he found meaningful work here, successfully reinvented himself as an agricultural economist, and will soon be consulting for the World Bank. Brian has sustained me through this chapter, and he inspires me to tackle the road ahead with passion, principle, and hope.

Brian has remarked that one of the things that he has enjoyed about being in Vienna was meeting so many people from so many places who are so obviously genuinely committed to trying to build a kinder, gentler world — and yes, I’m talking about all of you. I agree.

Thank you for the opportunity to work with you, and for the kindnesses you have shown us. We will take you with us in our hearts.