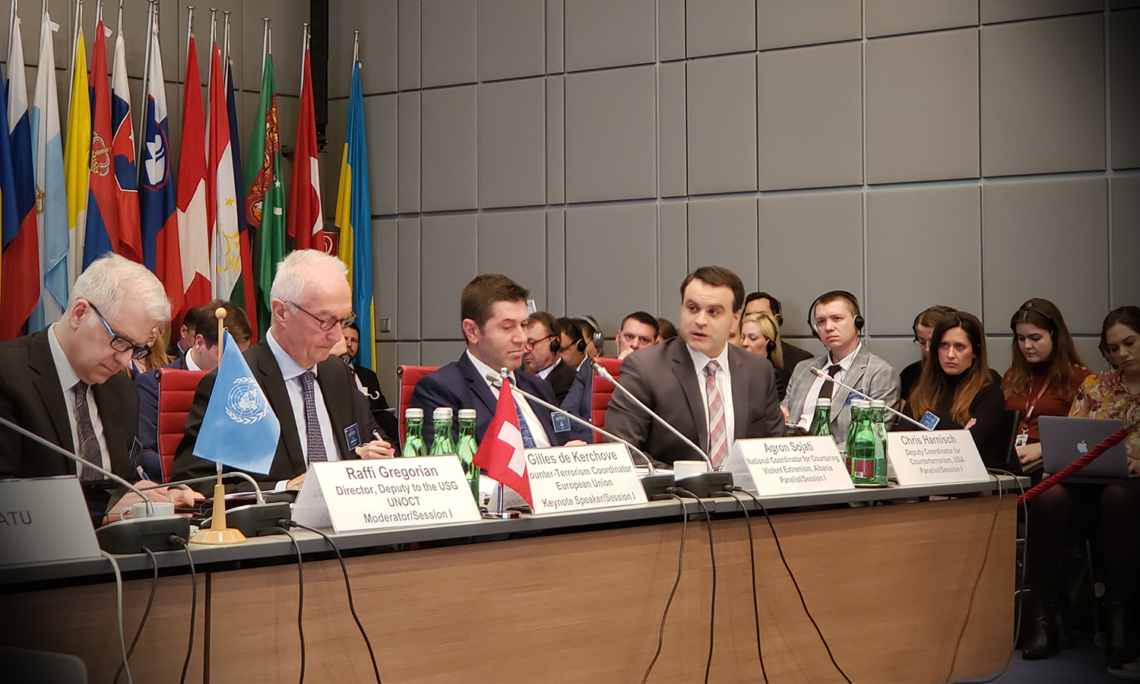 Good morning. Let me begin by thanking the OSCE, UNOCT, and the Government of Switzerland for hosting this high-level conference and for each of you for being here.

I would like to touch on two important priorities for the United States – first, the urgent need for countries of origin to rehabilitate and reintegrate repatriated foreign terrorist fighters and ISIS-associated family members from Syria and Iraq, and second, the importance of countering racially or ethnically motivated terrorism, including white supremacist terrorism.

On the first topic, on the detentions front, we have been ringing the alarm bell for more than a year about the conditions in detention facilities, as well as the distinct but related issue of the conditions faced by ISIS-associated family members residing in camps, such as al-Hol, in eastern Syria.

When we convened about a year ago in Bratislava, we discussed the international security threat posed by ISIS fighters in Syrian Democratic Forces custody. Dozens have died in custody since then, but most remain in in prisons that we know are breeding grounds for further radicalization. The Syrian Democratic Forces do not have the capacity to hold these ISIS fighters forever. All of our countries have a moral and security imperative to repatriate our citizens, bring them to justice, and ensure that they never return to the battlefield. The most likely outcome of not pursuing repatriation and prosecution is that large numbers of these ISIS fighters re-engage in terrorism, either undetected in our own countries, or they show up in other conflict zones.

Beyond the security imperative to repatriate and prosecute, we also have a humanitarian imperative. We have heard a lot this morning about the importance of upholding human rights. For decades, Europe has been the gold standard for upholding human rights standards. Sadly, leaving your citizens in squalid camps in the desert or overcrowded prisons without charge, or worse yet, stripping citizens of their citizenship, shows a complete and utter disregard for human rights.

On the issue of al Hol, where tens of thousands of children languish in dire conditions and where ISIS still has a strong presence, our collective inaction is planting the seeds for a future generation of terrorists. In the one year since we met in Bratislava, a 7 year old little boy in al Hol has turned 8 and missed a year of primary education somewhere in his home town in Europe or the Middle East or Central Asia. Instead, he received another year of indoctrination by ISIS. And next year when we meet, he will be 9 years old. And in several years, if we don’t act, he will be of fighting age and ready to carry forward the torch of his father. The former ISIS spokesmen said, “If we do not reach Rome, then our children and grandchildren will reach it.” We have a chance to avoid this, but we all must act now. Ignoring these problems will not make them go away. Today, the United States reiterates our call for countries to repatriate their citizens from Syria as quickly as possible.

The United States has consistently maintained that FTFs, whether male or female, should face prosecution in their home countries. Women who did not commit terrorist acts represent a more complicated demographic, as these women may share violent terrorist ideologies or may be victims. We have also been adamant that countries always treat the children as victims, even those that have engaged in violence. For our part, the United States has repatriated 23 Americans from Syria, including men, women, and children of all ages.

We have also worked with governments in Central Asia, North Africa, and the Western Balkans to repatriate their citizens. I want to thank countries such as North Macedonia, Bosnia & Herzegovina, Kosovo, Italy, and Morocco for their taking the initiative to repatriate. And I especially want to thank Kazakhstan, which is the world leader on this issue and has set the example for all countries to follow.

The United States is committed to helping countries that repatriate their citizens from Syria and Iraq to acquire the knowledge and resources to rehabilitate and reintegrate them back into society.

We have sent some of the world’s top experts on rehabilitation and reintegration to countries such as Kazakhstan, Kosovo, the Maldives, Trinidad and Tobago, and Tunisia to provide technical expertise and mentorship to those who have worked, or will work, directly with returnees.

As co-chairs of the GCTF’s Foreign Terrorist Fighters Working Group, the United States and Jordan have prioritized addressing the challenges of returning FTFs and their families. In September, the FTF Working Group co-chairs, along with Kazakhstan, Morocco, North Macedonia, and Russia, held an event on FTF repatriation to share experiences and lessons learned.

In the next year, the FTF working group will take this discussion one step further and hold regional workshops for policymakers and practitioners, law enforcement, and civil society organizations to address the challenge of returning families of FTFs and put GCTF good practices into action. This work serves as an important example of how we all need to work together to address this complicated issue.

A primary goal of rehabilitation and reintegration for the mothers of ISIS-associated children is their full disengagement from terrorism by re-socializing them back into their communities in a way that respects both rule of law and human rights. Providing the mothers’ with psychosocial support is critical and relates directly to the psychosocial health of their children.

We commend GCERF, the Global Community Engagement and Resilience Fund, for establishing an Accelerated Funding Mechanism to allow donor nations to pool their foreign assistance to collectively address the issue of returning FTFs and their family members, through a tried and tested multilateral mechanism that works at a community level.

Additionally, we see great value in UNOCT’s nascent project to coordinate funding and programming under the auspices of their “global prosecution, rehabilitation, and reintegration initiative.” This initiative aims to provide comprehensive, tailored support through surge capacity to deliver needs assessments, which will result in a menu of options for countries including support to justice and prison systems, support for effective prosecutions, and support for rehabilitation and reintegration.

We applaud these worthy efforts of GCERF and UNOCT and call on countries to contribute to them financially.

The United States also deeply appreciates how the OSCE plays a constructive role helping participating states with these challenges using a whole of society approach that includes civil society. We look forward to hearing more during the side event session regarding the recent publication of a rehabilitation and reintegration guidebook produced by the Action Against Terrorism Unit in the OSCE Transnational Threats Department. The guidebook focuses on rehabilitation and reintegration for policy makers and practitioners in South-Eastern Europe.

The OSCE appropriately highlights the need to develop tailored, context- and conflict-sensitive approaches by consulting with experts and practitioners on the ground. We look forward to continuing to work with Albania and applaud their prioritizing these issues as 2020 chair in office.

Switching gears, I want to discuss another issue related to the Foreign Terrorist Fighter problem set: countering racially or ethnically motivated terrorism – including white supremacist terrorism. This is a CT priority for the United States.

The white supremacist terrorist attacks in Christchurch and El Paso were game changers, and inaction is not an option. The Trump Administration’s National Strategy for Counterterrorism identifies a broad range of “terrorists who are not motivated by a radical Islamist ideology but are instead motivated by other forms of violent extremism, such as racially motivated extremism.”
The increasing prominence of white supremacist groups throughout Australia, Canada, Europe, New Zealand, Ukraine, and the United States corresponds with an increasing number of attacks on civilians. Of particular concern is the number of white supremacists who travel overseas for training or to gain combat experience in conflict zones. The Soufan Center think tank in New York estimates that thousands of white supremacist foreign fighters have crossed international boundaries for training or to fight.

Make no mistake, just as many ISIS fighters will return home from the battlefields in Syria and Iraq, so too will these white supremacist fighters, where they will recruit, organize, and operate.

Collectively, we need to use every counterterrorism tool in our toolbox to mitigate the threat of racially and ethnically motivated terrorism to our homelands. Likewise, we must treat the white supremacist FTF threat in a similar manner that we treat the Islamist jihadi threat. There have been too many attacks by adherents of this evil ideology, and we must reverse this dangerous trajectory, just as we have fought to stem ISIS- and al-Qaeda-inspired attacks.