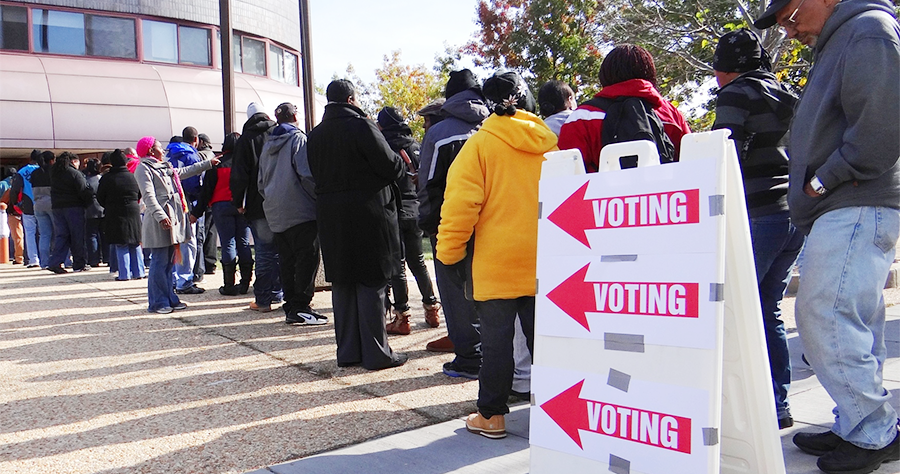 People lining up to vote at a polling station in a police headquarters in the Anacostia area of Washington, D.C., 6 November 2012. (OSCE/Thomas Rymer)

Free and fair elections are the foundation of every healthy democracy, ensuring that government authority derives from the will of the people.

But to have confidence that their elections are truly free and fair, voters need to be assured of more than just a well-managed day of polling.

Features of free and fair elections also include a society that encourages citizens to vote, that provides space for political parties to work and campaign freely and independent media and civil society to flourish, and that has built a judiciary capable of acting with impartiality.

All 57 OSCE countries have committed to holding free and fair elections, and the United States supports the many OSCE initiatives to help them achieve this objective, including the organization’s election observation work.

OSCE election observation is widely seen as the ‘gold standard’ of international election observation. It is renowned for its objectivity, impartiality, transparency, and the thorough system it has developed through many years of practical implementation.

But how does it work?

Every OSCE election observation mission starts with an invitation to the OSCE from the government of the country about to hold an election. While OSCE countries are not legally obligated to invite OSCE observers, we have all committed to do so.

Then, taking as its basis the clear, commonly-developed OSCE standards on free and fair elections, the OSCE determines the duration and scale of observation needed, and deploys an election observation mission to the country.

Election Observation Starts Long Before a Single Vote is Cast

A few days before election day, short-term observers arrive to bolster the mission and watch the voting process – from the opening of polling stations to the counting of the votes – with the aim of understanding whether voters were able to vote in secrecy and free from intimidation, and whether the ballots were subject to mishandling.

It is important to note: election observers do not intervene in the election process at any step of the way; they are there to observe, and to report.

The United States greatly values the OSCE’s important work promoting free and fair elections throughout the OSCE region, and strongly believes that all OSCE countries should use the opportunity to invite, and participate in, observation missions.

All OSCE countries, including the United States, should continuously strive to improve their democratic practices, to help ensure the protection of human rights, as well as the prosperity and overall welfare of their citizens.