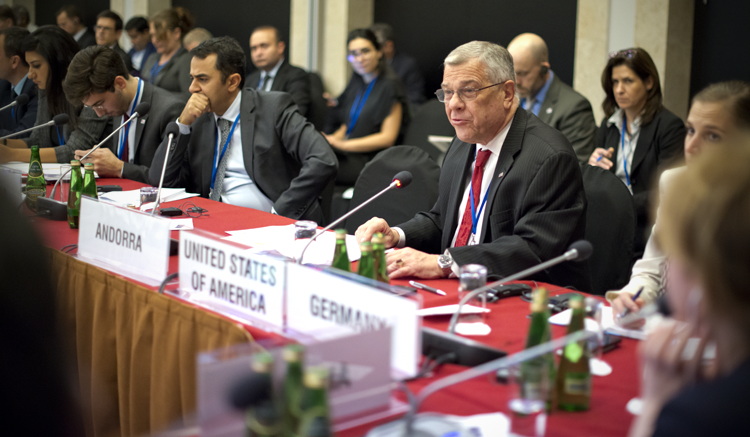 Freedom of religion or belief is a founding principle of the Helsinki Process. Unfortunately, a small number of participating States engage in consistent, systematic violations and abuses of the freedom of religion or belief. Many target those who seek to exercise this fundamental freedom outside of state control. Some laws that allegedly counter so-called “extremism” are actually tools of repression. In some countries, proselytizing or advocating that one’s own beliefs are superior may be codified as “extremist.” Such countries routinely ignore their OSCE commitments, including the 1989 Vienna Concluding Document and the 1990 Copenhagen Document.

In Turkmenistan there were reports of beatings, imprisonment, arbitrary detention, searches, confiscation of religious materials, and verbal abuse against members of religious minority groups. The law prohibits unregistered groups from operating, including establishing places of worship, gathering for services, producing and disseminating religious materials, and proselytizing. The government restricts registered groups’ ability to obtain permanent premises for worship. It also restricts them from printing, importing, or disseminating religious literature. We urge Turkmenistan to reform its military service law to re-introduce provisions for conscientious objectors and to ease and clarify the registration procedures for religious groups.

In Uzbekistan, the government classifies as “religious extremists” groups or individuals supporting incorporation of sectarian religious principles into laws and governance. The government often accuses peaceful groups of extremism. Independent human rights groups estimate as many as 15,000 individuals are imprisoned on charges related to “religious extremism” or membership in an illegal religious group. There are reports of physical abuse and prisoner deaths. The government limits access to religious publications, and arrests individuals attempting to import or publish religious literature. Those who wish to change their religion, as well as those who proselytize, face discrimination and persecution.

Religious freedom in Tajikistan deteriorated significantly in the past year. The law restricts who can pray, when they can pray, and where they can pray. Authorities have harassed and beaten women who wear hijabs and men with beards. By law, persons under 18 are unable to worship publicly, and a May constitutional referendum banned all non-secular political parties.  The government refuses to disavow a fatwa barring women from attending mosques.

We are concerned that Kazakhstan plans to pass new security laws that could further restrict and penalize religious activities. We urge the government to reduce registration requirements and penalties for unauthorized, peaceful religious practice.

We are deeply concerned by Russia’s anti-terrorism law that took effect in July. It is used to harass, intimidate, and repress legitimate, peaceful religious expression. The law expands on an already repressive Russian law used to persecute Jehovah’s Witnesses, Muslims, and others. The new law authorizes longer prison sentences for alleged “extremism,” restricts religious activities to state-approved venues, allows for the deportation of missionaries, and sets large fines for various “violations.” Russian occupation authorities in Crimea continue to raid Tatar villages, homes, and mosques, ostensibly searching for “extremist literature,” weapons, and contraband. Such actions politically target the entire Crimean Tatar community under the guise of “anti-extremist” activity.

Religious groups that Azerbaijan considers non-traditional face obstacles to legal registration especially those outside of Baku. Members of such groups cannot freely practice their religion without fear of police raids, fines, detention, arrest, or prosecution. Many religious adherents are incarcerated.

We welcome Ukraine’s recent Constitutional Court ruling allowing citizens to organize a religious gathering by simply notifying the authorities. They are no longer are required to seek permission.

We encourage all participating States to give appropriate consideration to the 2014 ODIHR Guidelines on the Legal Personality of Religious or Belief Communities. These Guidelines detail commitments from the Helsinki Final Act and provide practical guidance for the relationship between a State and religious or belief communities. We also welcome ODIHR’s work in the field of religion or belief and the contributions of the Panel of Experts. We encourage participating States to refer draft laws intersecting with this right to the Panel for expert analysis and review.

Finally, many refugees fleeing Da’esh in Iraq and Syria have suffered profound religious persecution and atrocities, including those our Secretary of State has identified as genocide. Each of our countries should counter this malignant ideology that preys on Christians, Yezidis, and Muslims alike.

Each of our countries has obligations to ensure that the fundamental freedom of religion or belief is respected and defended – not just for our own citizens, but for those who come to our countries as refugees, migrants, or conflict victims.