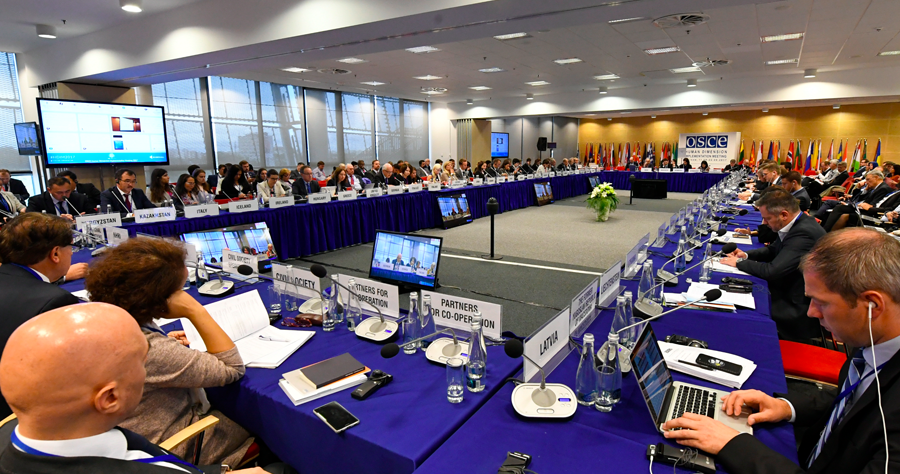 Statement on Freedom of Thought, Conscience, Religion, or Belief at Working Session 6

As prepared for delivery by Ambassador Michael Kozak, Head of Delegation
September 14, 2017

Freedom of religion is an animating, foundational principle of the United States. The right to believe or not to believe is embedded in our Constitution and integrated throughout national and state laws.

Russia is misusing anti-terrorism laws to suppress religious freedom in unprecedented ways, raiding houses of worship and homes and harassing, fining, jailing and deporting members of religious minorities. The Russian Supreme Court banned the Jehovah’s Witnesses (JWs) as an extremist organization on April 20, 2017, prohibiting their activity and confiscating their property. This criminalization enables the government to act against the Witnesses with impunity. A Danish member arrested in Russia and charged with extremism in May for holding a religious meeting remains in detention, as do five Scientology leaders arrested in June on extremism and other charges.

Some OSCE participating States continue to use security concerns as a pretext for failing to adhere to their obligations and commitments regarding freedom of religion or belief. The State Department designated Tajikistan, Turkmenistan and Uzbekistan in 2015 as “Countries of Particular Concern,” under the International Religious Freedom Act for engaging in or tolerating “systematic, ongoing, and egregious” violations of religious freedom.

In Tajikistan, the government restricts children under 18 from attending public religious services, in contravention of the 1989 Vienna Concluding Document, in which the participating States committed to respect “the liberty of parents to ensure the religious and moral education of their children in conformity with their own convictions.” Tajikistan is the only country to enforce such a restriction nation-wide. The government also refuses to disavow a 2004 fatwa prohibiting Hanafi Sunni women from attending mosque. In April 2017, authorities raided a Protestant church and arrested Pastor Bakhrom Kholmatov for inciting “religious hatred” by singing songs deemed “extremist.” Authorities increasingly harass individuals for their religious attire.

In Turkmenistan, religious groups encounter significant obstacles to legal registration. The government inspects all religious literature before permitting it to enter the country. There is no civilian alternative to mandatory military service for members of religious communities unable to perform military service because of religious beliefs. Members of religious minorities reportedly have been beaten and imprisoned for beliefs the government considers unacceptable, particularly unregistered Protestants, Jehovah’s Witnesses, and Muslims, which the government considers “extremist” or “Wahhabist.” We remain deeply concerned for prisoners of conscience Bahram Hemdemov and Bahram Saparov.

Practicing religion in Uzbekistan outside of stringent regulations is subject to review by authorities on the basis of national law. People may be detained, questioned and fined for gathering to discuss their religious beliefs outside of government authorized locations. While there are no independent verifications, former President Karimov reportedly imprisoned an estimated 5,000-15,000 people – mostly Muslims – on charges of “religious extremism,” or belonging to a religious group the government deems illegal. President Shavkat Mirziyoyev has announced plans to provide amnesty to many of these religious prisoners, which, if true, would address a major human rights concern. We encourage the government to provide amnesty as soon as possible.

We are closely monitoring parliamentary discussions in the Kyrgyz Republic on a draft amendment to the law on religion. As currently drafted, the amendment would give the government more control over religious groups, place further restrictions on proselytizing and registration, and give the State Commission on Religious Affairs more regulatory powers.