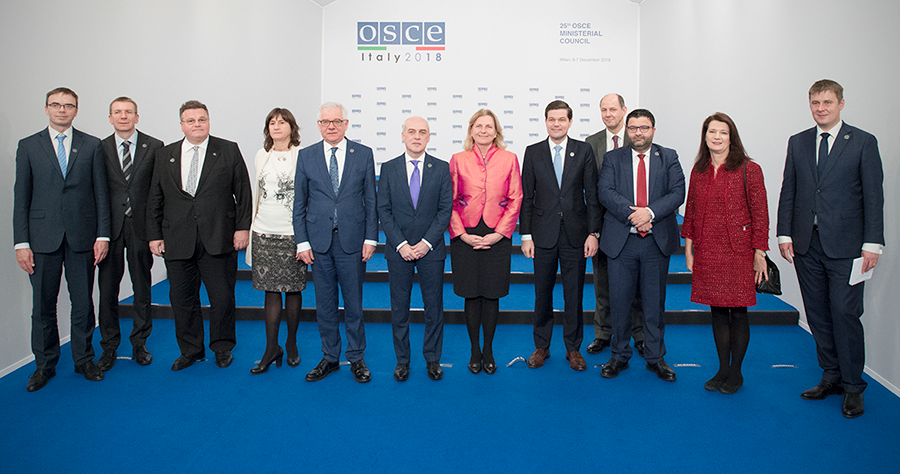 The Group of Friends of Georgia, foreign ministers and high-level government officials from 12 nations, meet at the 25th OSCE Ministerial Council on December 6, 2018 in Milan, Italy.

This statement is made on behalf of Bulgaria, Canada, Czech Republic, Estonia, Latvia, Lithuania, Poland, Romania, Sweden, Ukraine, the United Kingdom, the United States of America.

We reaffirm our unwavering support for Georgia’s sovereignty and territorial integrity within its internationally recognized borders.

We condemn that ten years since the Russian military invasion of Georgia, Russia’s occupation of Georgia’s Abkhazia and South Ossetia regions continues as the security and humanitarian situation on the ground in the conflict-affected areas further deteriorates.

We express our staunch support for the non-recognition policy with regard to these regions and call on all OSCE participating States to do so as well.

We call upon the Russian Federation to reverse its recognition of the so-called independence of Georgia’s Abkhazia and South Ossetia regions.

We underline the need for the peaceful resolution of the conflict, based on full respect for the UN Charter, the Helsinki Final Act, and the fundamental norms and principles of international law.

We welcome the progress made by Georgia in strengthening democracy and good governance, improving transparency of its institutions, and upholding human rights, as well as in the process of European and Euro-Atlantic integration and economic development. It is disappointing that these benefits cannot be enjoyed by the residents of Georgia’s Abkhazia and South Ossetia regions. We believe a peaceful resolution of the Russia-Georgia conflict would have a transformative effect not only on Georgia but on the region as a whole.

We express our deep concern over the increase of Russia’s military exercises and its further military build-up in Georgia’s Abkhazia and South Ossetia regions. Continuous violations of the EU-mediated 12 August 2008 Ceasefire Agreement by Russia destabilize the situation and erode the principles and norms upon which our security depends.

We reiterate our firm support to the Geneva International Discussions as a unique and important negotiation format to address the security, human rights and humanitarian challenges stemming from the unresolved conflict between Georgia and Russia. We regret the lack of progress on the core issues of the discussions, including the non-use of force, establishment of international security arrangements in Georgia’s Abkhazia and South Ossetia regions aimed at providing security and stability on the ground, and ensuring the safe, dignified, and voluntary return of IDPs and refugees. We underline the crucial importance of participants in good faith to find durable solutions for the security and humanitarian challenges of those affected by the conflict and to reach tangible results on core issues of the negotiations.

We express our strong support for the Incident Prevention and Response Mechanisms (IPRMs) and emphasize their important role in preventing the escalation of the conflict. We express our great concern over the latest disruptions of the IPRMs in both Gali and Ergneti and call upon the participants to resume the IPRMs without further delay in full respect of the founding principles and ground rules. We encourage the participants to find proper solutions for the safety and humanitarian needs of the conflict-affected population.

We commend the valuable contribution of the EU Monitoring Mission in preventing the escalation of tensions on the ground and once again call upon the Russian Federation to allow the EUMM to fully implement its mandate and enable the Mission’s access to Georgia’s Abkhazia and South Ossetia regions.

We condemn the killings of Georgian Internally Displaced Persons (IDPs) Archil Tatunashvili, Giga Otkhozoria, and Davit Basharuli, and urge the Russian Federation, as the state exercising effective control over Georgia’s Abkhazia and South Ossetia regions, to remove any obstacles to bringing the perpetrators to justice. In this context, we support preventive steps by Georgia aimed at eradication of the sense of impunity and abuses of human rights in Georgia’s Abkhazia and South Ossetia regions, and we take note of the adoption of the Decree of the Government of Georgia on approval of the Otkhozoria-Tatunashvili list based on the relevant Resolution of the Parliament of Georgia.

We are deeply concerned over the ethnic discrimination against Georgians residing in Abkhazia and South Ossetia regions and condemn the abuses including allegations involving torture and cruel or degrading treatment or punishment, undue restrictions on rights related to freedom of movement and residence, housing, land and property, as well as the restriction of education in one’s native language. We are concerned about the impact of closures of so-called crossing points.

We condemn the mass destruction of houses of IDPs, which illustrates Russia’s purposeful policy aimed at completely erasing the traces of ethnic Georgian population and cultural heritage in Abkhazia and South Ossetia regions. We support the voluntary return of internally displaced persons and refugees to the places of their origin.

We underline that the ongoing process of fortification of the occupation line through installation of barbed and razor wire fences and other artificial obstacles, further aggravates the humanitarian conditions of conflict-affected population on the ground.

In this context, we call upon the Russian Federation to allow the unhindered access of international human rights monitoring mechanisms to Abkhazia and South Ossetia regions.

We support the peaceful conflict resolution policy of the Government of Georgia. We welcome Georgia’s compliance with the EU-mediated 12 August 2008 Ceasefire Agreement and call upon the Russian Federation to respect its international obligations and fully implement the aforementioned Ceasefire Agreement, inter alia, to withdraw its military forces from the occupied territories of Georgia.

We welcome Georgia’s unilateral commitment not to use force and call on the Russian Federation to reciprocate, to affirm and implement a non-use of force commitment.

We welcome the Georgian Government’s efforts aimed at reconciliation and confidence building between divided communities. We reiterate our strong support to the peace initiative of the Government of Georgia, “A Step to a Better Future,” aimed at fostering confidence building and interaction among the divided communities and improving the humanitarian and socio-economic conditions of people residing in Georgia’s Abkhazia and South Ossetia regions

We encourage the OSCE’s further active engagement in the process of peaceful resolution of the Russia-Georgia conflict and facilitation of confidence building and engagement between the communities divided by war and occupation line.

We encourage the OSCE participating States to agree on the opening of an OSCE cross-dimensional mission in Georgia for the benefit of the conflict-affected persons including a monitoring capacity able to operate in both the Abkhazia and South Ossetia regions. The mission will considerably strengthen the OSCE’s engagement in the GID and IPRMs, as well as in implementation of confidence-building measures.

The Friends will redouble their efforts to keep the issues related to the Russia-Georgia conflict high on the international agenda, raise awareness of developments in Georgia’s Abkhazia and South Ossetia regions, and emphasize the urgent need for peaceful resolution of the conflict.