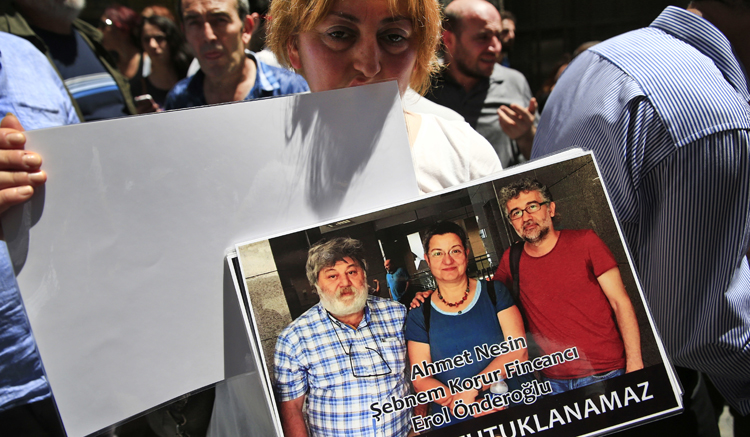 A protester holding a photograph of from left to right, journalist Ahmet Nesin, academic Sebnem Korur Fincanci and Reporters Without Borders' local representative Erol Onderoglu, demonstrates against their jailing outside the offices of Ozgur Gundem, a pro-Kurdish publication, in Istanbul, Tuesday,

The United States wishes to, once again, express its concern about actions by the Turkish government that are restricting the exercise of constitutionally-guaranteed freedoms in Turkey.

The United States is concerned about recent legislation that lifted the parliamentary immunity of nearly 150 members of the Turkish parliament, many for charges solely related to political speech, which will have a chilling effect on freedom of expression across Turkey. A common tenet in democratic societies is equality before the law. We firmly believe that the freedom to engage in political speech – even speech which many find controversial or uncomfortable – should and must be protected for everyone, including speech by elected representatives of a country’s citizens. We are closely monitoring developments regarding this measure. If this change results in a narrowing of space for political debate, it will erode the quality of Turkey’s democracy.

Like the European Union and the Representative on Freedom of the Media, the United States is also concerned about the continuing detention, and in some cases arrest, of journalists, activists, and others in connection with comments they have made that are critical of government officials, actions, or policies. The recent arrests of the President of the Human Rights Foundation of Turkey, Sebnem Korur Fincanci, Reporters Without Borders Turkey representative Erol Onderoglu, and journalist Ahmet Nesin, appear to be part of a troubling trend in Turkey ‎whereby official bodies are being used to discourage legitimate political discourse.

As Turkey’s friend, we urge Turkish authorities to ensure their actions uphold the universal democratic values enshrined in Turkey’s constitution, and its international human rights obligations and commitments, including freedom of expression. In a democratic society, critical opinions should be encouraged, not silenced. Democracies become stronger and more resilient by protecting the freedom of expression for diverse voices within society.