Home Home | News & Events | On the Harassment and Intimidation of Political Opposition in Russia: Statement to the PC 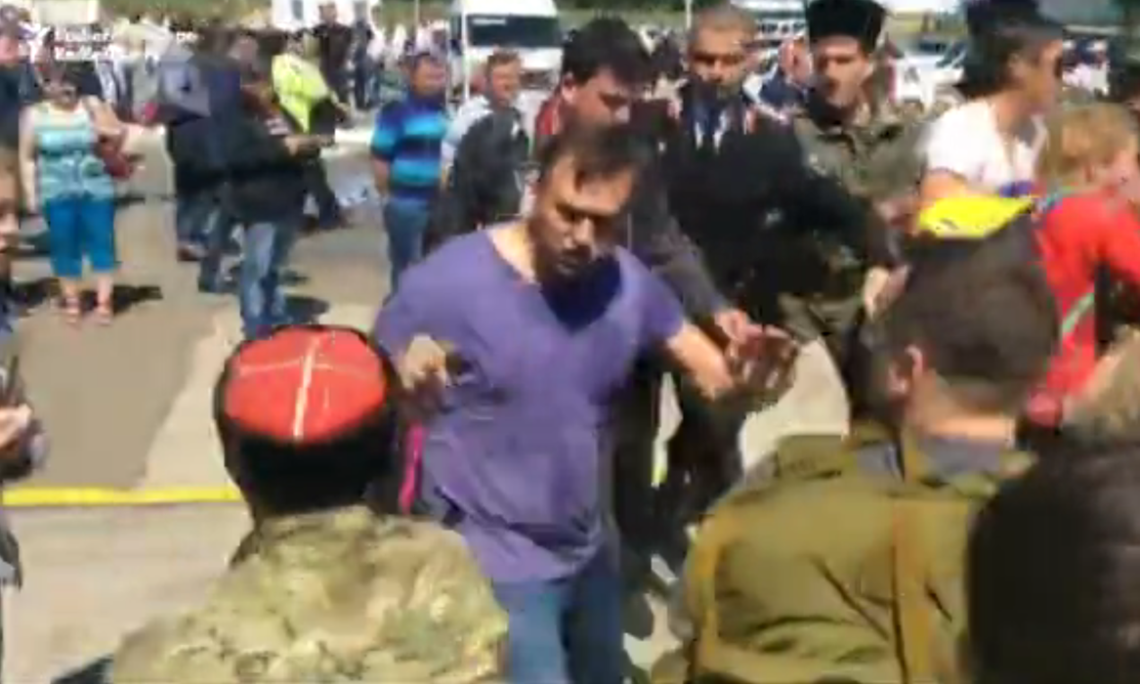 Russian opposition leader Alexei Navalny during at attack on May 17. (RFE/RL screenshot)

Russia today is a place where independent civil society is under siege and peaceful dissent can be dangerous. We are concerned about a pattern of harassment and attacks against members of the peaceful political opposition in Russia. On May 17, a group of approximately 30 men attacked Alexei Navalny, an opposition politician, and his fellow anti-corruption activists outside Anapa airport in southern Russia. Videos of the incident posted on Russian social media show Cossacks wearing traditional fur hats, some in military-style fatigues and black boots, throwing milk at the group before attacking them. The videos show that Russian law enforcement authorities at the scene stood by and did not take any preventative action to stop the violence.

Mr. Navalny and Mikhail Kasyanov, another political opposition member, have been physically attacked previously and they have been subjected to smear campaigns on state-controlled media. Those who express public dissent or who participate in events organized by civil society are also increasingly subject to attacks, ranging from oral assaults to physical violence. Even children are apparently not exempt. On April 28, at Moscow’s renowned House of Cinematography, some pro-Kremlin protestors attacked those attending an award ceremony for an annual secondary school history essay competition organized by the civil society organization Memorial and sponsored by a presidential grant. The attackers threw eggs and green liquid at the teenage winners of the competition, their teachers, and other participants at the gathering. The attackers called participants in the award ceremony “national traitors” and other offensive names. Once again, police at the scene did little to stop those in the crowd who engaged in physical violence.

It is inexcusable for officials of any participating State to stand idly by as members of political opposition groups or civil society are harassed, intimidated, threatened, or attacked. Such conduct is counter to the most fundamental principles of this Organization, in particular the commitments made in 1990 in Copenhagen, when OSCE participating States reaffirmed their respect for the rights of individuals and groups to establish, in full freedom, their own political parties or other organizations, and the right of individuals to exercise freedom of association, including the right to form, join, and participate effectively in non-governmental organizations. Participating States reaffirmed these principles again in Helsinki in 2008 on the occasion of the 60th anniversary of the Universal Declaration of Human Rights.

New restrictions and harsher penalties have made it increasingly difficult for individuals to voice personal views and for independent civil society groups to operate, such as the Duma’s approval of an amendment to the definition of political activities for NGOs under the “foreign agent” law. Based on the amended legislation, so-called political activity now includes public meetings, rallies, public debates, election observation, public opinion polling, or any public appeals to government authorities regarding existing laws. In essence, it is a gag order on freedom of expression, limiting the rights of individuals to express their views freely. Similarly, news that the top editors of RBC, a media group whose hard-hitting investigations touched President Putin’s family and delved into the lives of Russian soldiers fighting in eastern Ukraine, have been forced out following pressure from the Kremlin is more testimony to the constricting space for free expression by the media in Russia.

We also want to highlight Memorial’s recent publication of a list of current Russian political prisoners. The newest list includes details on 86 individuals, whom Memorial has identified and documented using a detailed analytical methodology. Some of the names are familiar to us in this Council – Gennadiy Afanasyev is one of them – and others less familiar, but they are equally important. Among them is Andrei Pivovarov, the PARNAS Party’s St. Petersburg regional co-chair, who is on trial in Kostroma and faces up to 12 years in prison on spurious charges of illegal access to computer information and bribing a former police official. We renew our call on the Russian Federation to release all prisoners being held for politically-motivated reasons.

As Russia prepares for parliamentary elections in September, the United States reiterates its call on the Russian government to foster an environment in which dissent is tolerated and those who express dissenting views are protected, in keeping with the rights enshrined in Russia’s own constitution. We urge the Russian government to condemn publicly any attacks or threats of violence against members of the political opposition or civil society activists, and to ensure that no further harm comes to them. We further remind Russia of its international obligations and OSCE commitments to protect and promote the human rights and fundamental freedoms of all, regardless of political affiliation or personal views.

As delivered by Ambassador Daniel Baer to the Permanent Council, Vienna